DAVID Beckham teams up with the Chelsea Pensioners — and backs our campaign to save the Poppy Appeal.

The ex-Man Utd ace, 45, said he was “in awe” of the veterans as he delivered poppies to their London HQ. 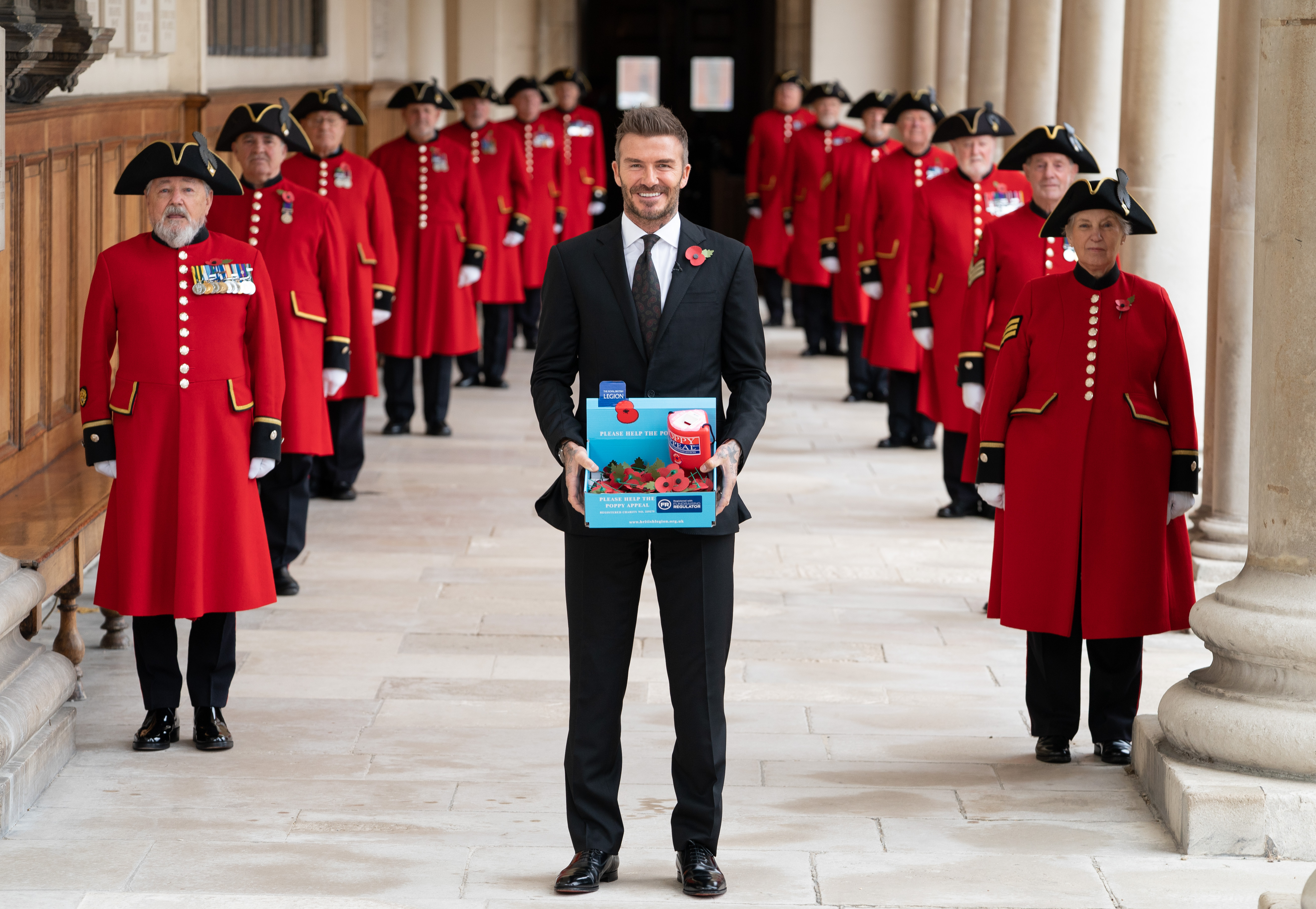 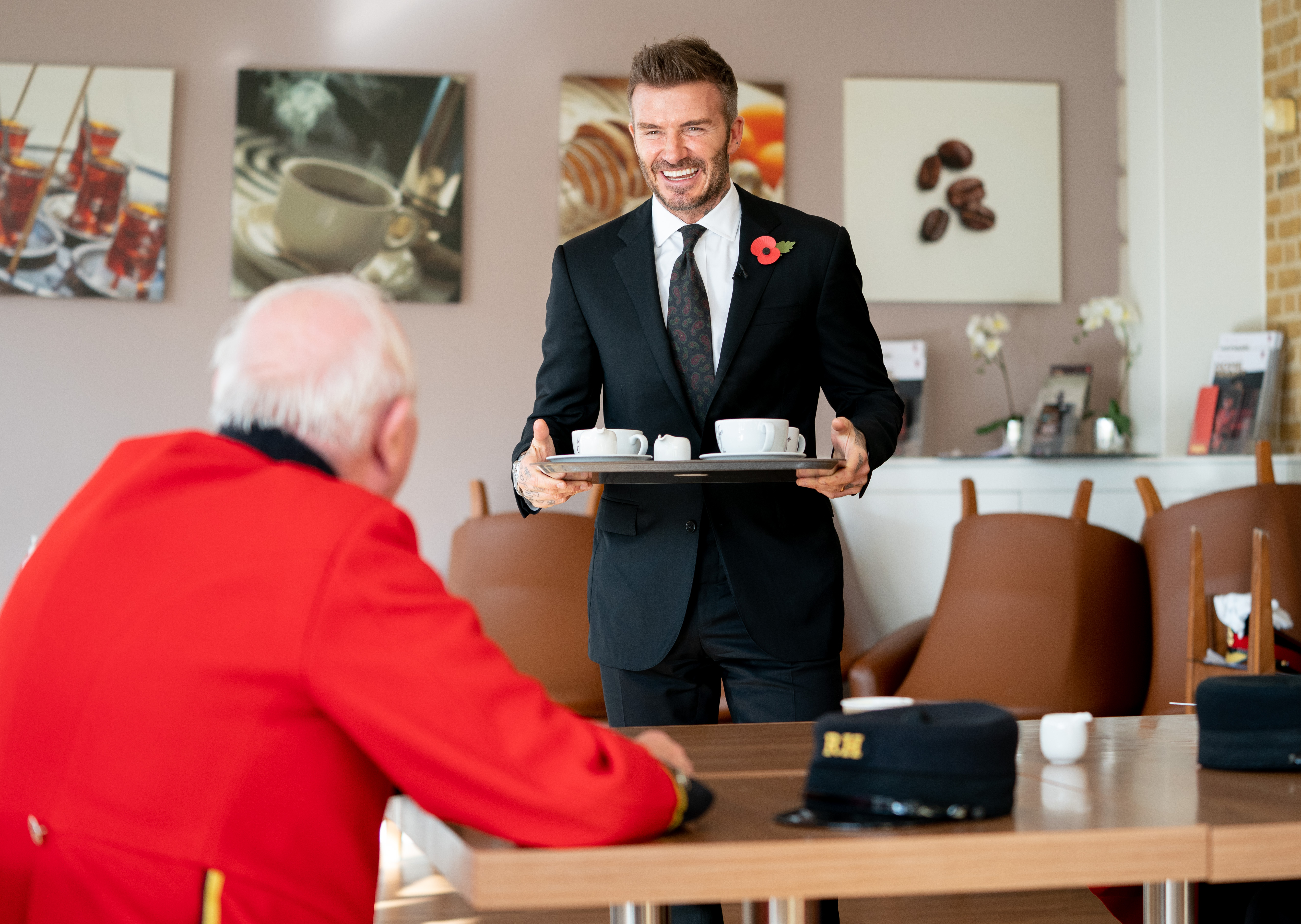 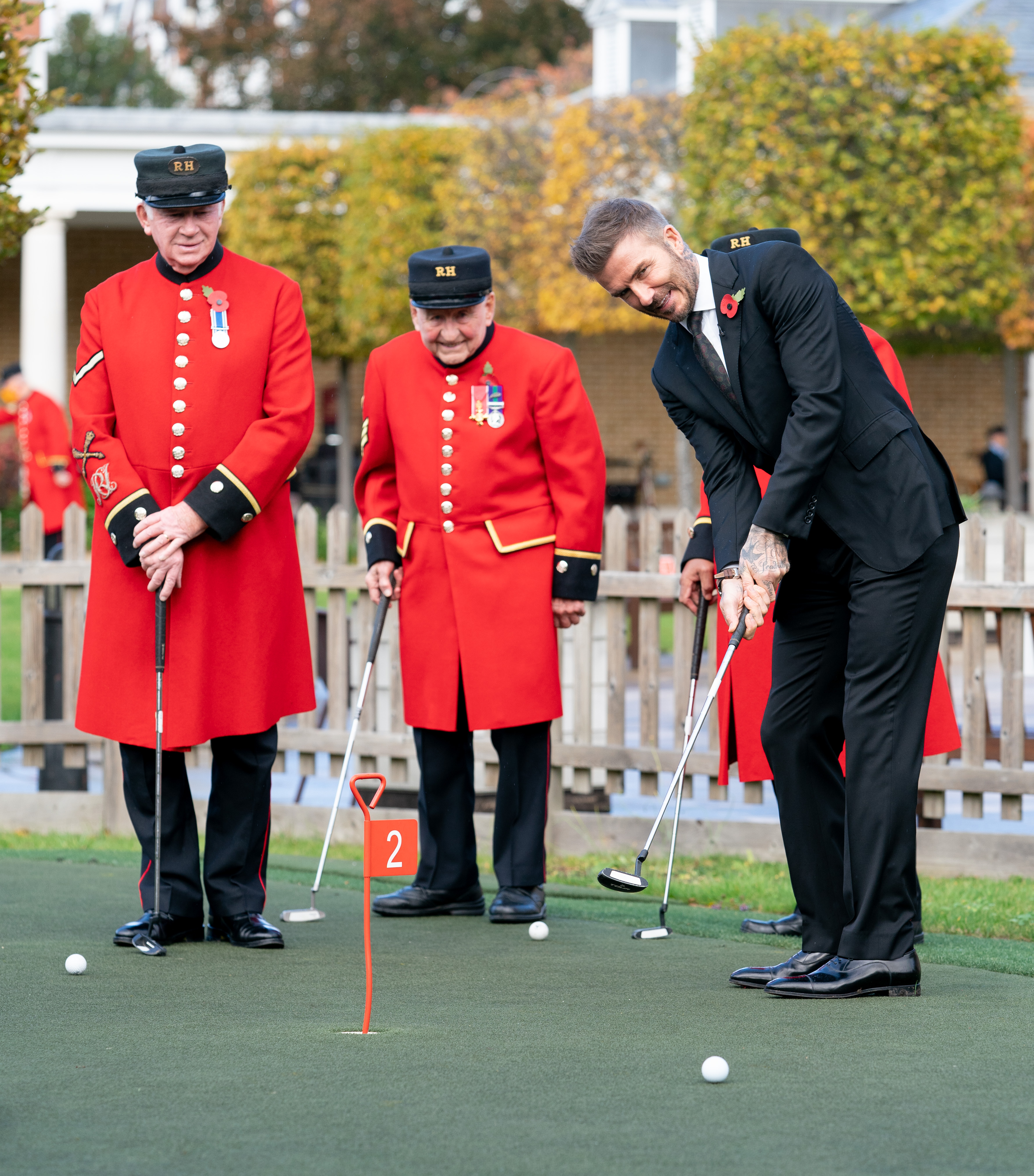 Becks today urges everyone to buy a poppy on the eve of lockdown, and said of our war heroes: “We owe that generation everything.”

The former England football captain championed The Sun’s campaign to save this year’s Poppy Appeal with a special delivery to the awesome Chelsea Pensioners.

They normally sell tens of ­thousands of poppies but have been banned from street selling ahead of this year’s Remembrance Day because of Covid-19.

But Becks called on Sun readers to find a way to buy one as he spent a fun and emotional day with the Pensioners, which stirred happy childhood memories.

He said: “With another lockdown coming it is more important than ever that we support our veterans.

Show your support at rbl.org.uk/poppyappeal

“A lot of them may be isolated or worried about the pandemic.

“That is why I am so glad to be able to support this campaign. That’s the reason I am here. This is a great campaign.”

David revealed he was “in awe” of the Pensioners as he spent time with more than 300 of them on Monday at their Royal Hospital Chelsea HQ in West London.

He told them how his grandad, World War Two veteran Joseph West, taught him the significance of the poppy as a kid.

Becks now does the same to his four children with wife Victoria, 46.

He said: “Remembrance Day is always special to me because my grandfather was in the Scots Guards and it was always a big deal in our household. 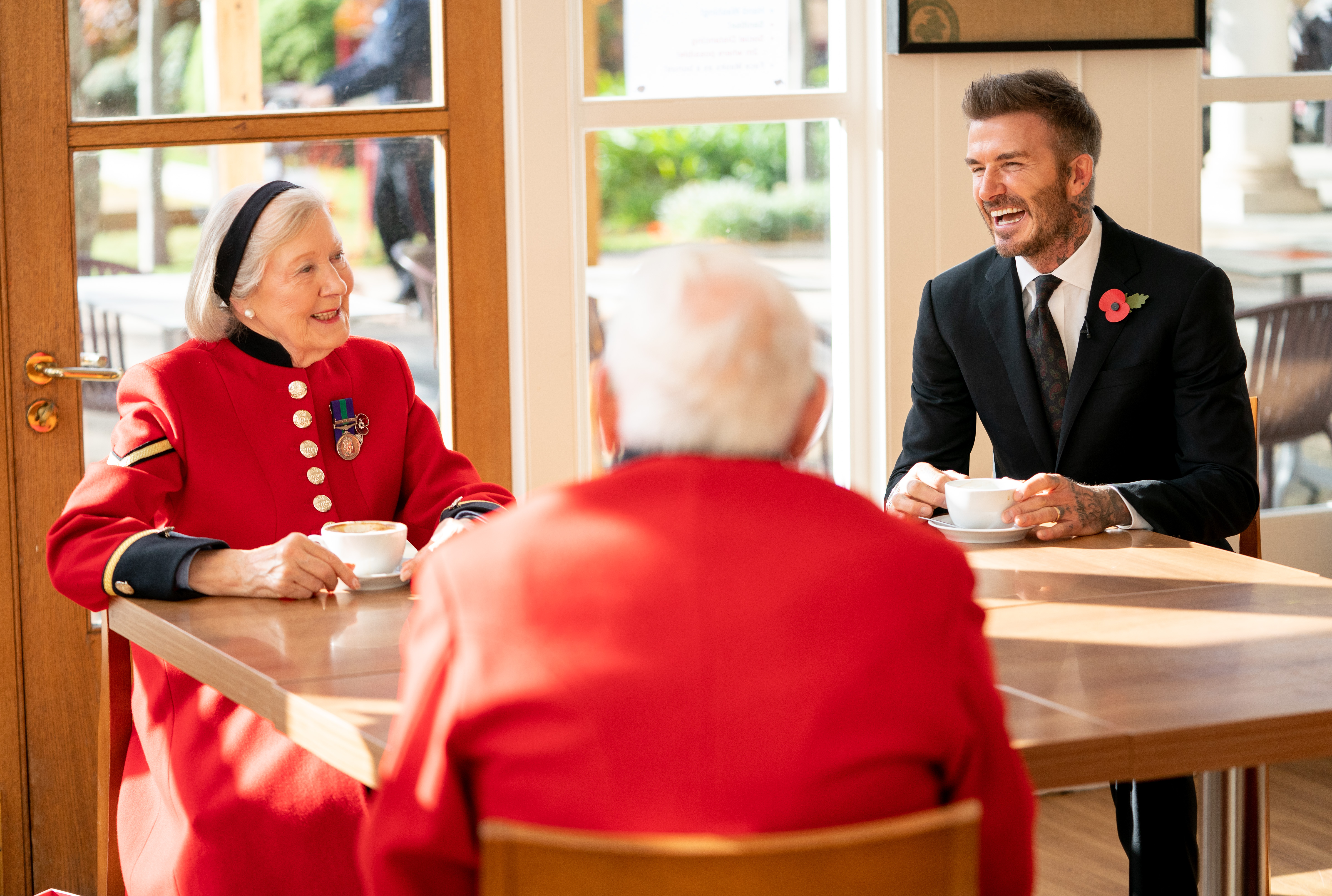 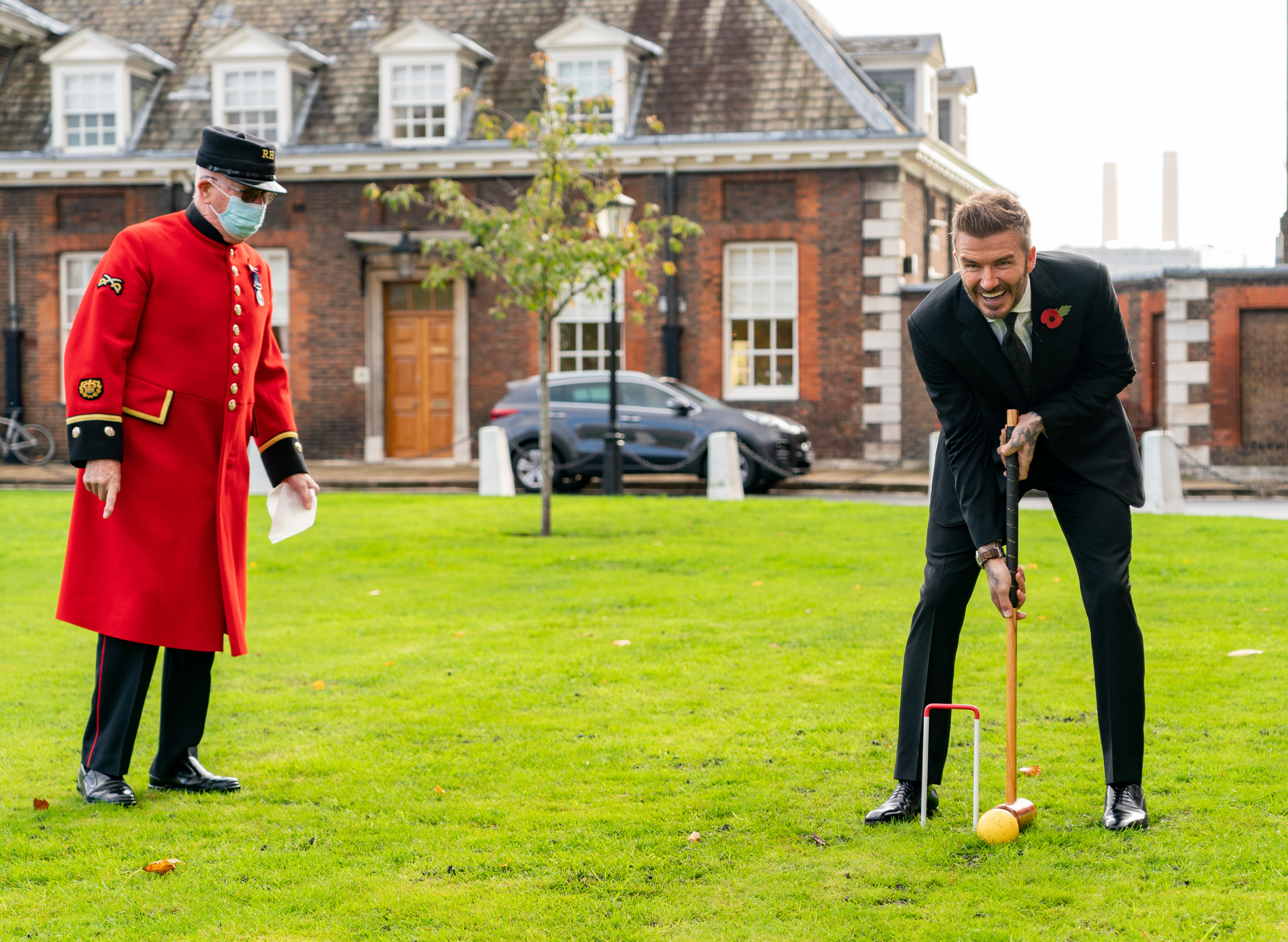 “When the poppies came out my grandad was the first to get us all one. He would say, ‘There’s your poppy. Wear it to school.’ It was a really exciting moment.

“It is so important we remember the sacrifice that our Armed Forces have made for us, as individuals, as families, and as a country.

“It is such an important part of our history to remember. And it is part of our future too.”

Scores of Chelsea Pensioners traditionally sell poppies on the streets each year to raise money for the Royal British Legion ahead of Remembrance Sunday.

The Sun launched a campaign to save the Poppy Appeal after the Legion revealed that a third of its 40,000 sellers would have to stay indoors amid virus fears.

We have to do everything we can to respect Remembrance Day

The Legion has been posting out poppies which are also available at stores including Sainsbury’s, Tesco, Asda, Aldi and Lidl.

In a role reversal, Becks delivered some to the Pensioners and insisted: “We have to do everything we can to respect Remembrance Day.

He took a Covid test before his visit, to ensure he was virus-free.

He also stuck to social-distancing rules at the Pensioners’ HQ on the banks of the Thames, but still managed to play croquet, a bit of golf — and dish out the teas.

He said the Pensioners’ tricorn hats and red frock coats brought back happy boyhood memories of his upbringing in East London. 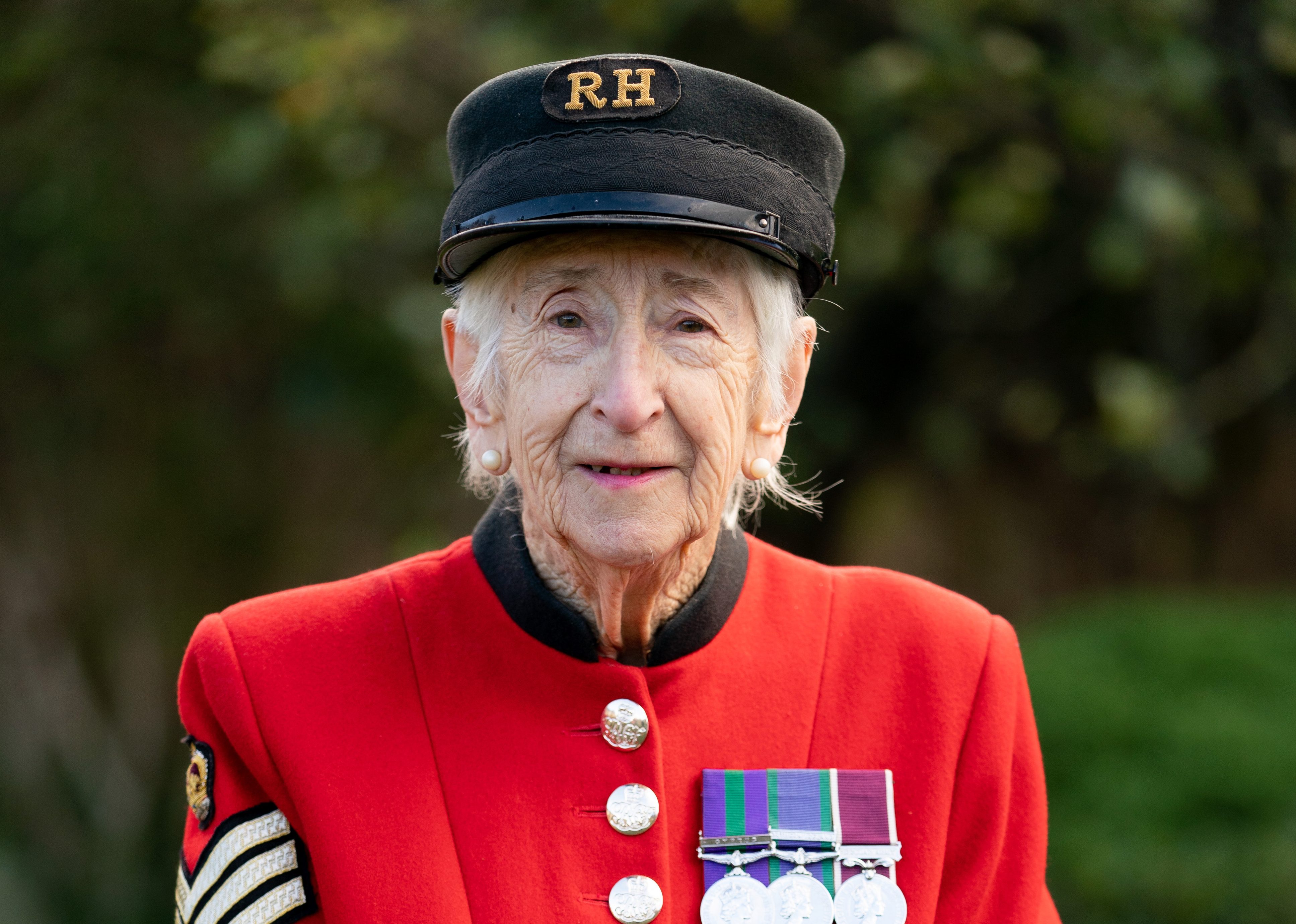 The ex-Royal Military Police officer said: “Hello David, I am an Arsenal supporter. Now where’s The Sun? I want to be on Page 3.”

The former Red Cap, known as Bimbo, has two titanium knees but recently completed a bungee jump and a wing walk to raise money for the Royal Hospital Chelsea.

Daredevil Charmaine, who served 23 years in the Army, now wants to abseil down the Shard.

Asked what she thought of Becks: “Yeah, he’s quite good looking. Thank you for coming and seeing us all.”

Becks, wearing a smart suit and tie and proudly sporting a poppy, explained: “To come down here and see you has really brought back memories from my childhood that has been so special.

“My grandad and my nan used to take me to the Changing of the Guard, the Royal Tournament and the Trooping the Colour and I used to see Chelsea Pensioners there.

"Then, being a footballer, from a very young age, when we used to play against Chelsea, or in the FA Cup Final, the Chelsea Pensioners were always in the crowd.

“It takes me back to those times and it is really special to be here.”

Becks asked how the lockdown had been — and the Pensioners were upbeat and uncomplaining.

Leo Tighe, 77, a former Sgt Major in the Irish Guards, said: “We are where we are. Remembrance is going to be totally different this year.

We really miss going out Poppying. Walking around in your scarlets is part of what being a Pensioner is all about

"I have done every Cenotaph parade since I came here but we won’t be able to this year.

“It’s a bit sad, but I understand why they are doing it.”

He told how he once took his daughter to see the Changing of the Guard and joked: “She said, ‘What’s wrong with the old ones?’”

The Pensioners are banned from going outside in their uniforms and are not supposed to travel further than their local Tesco, which is 300ft from their front door.

He went on: “We really miss going out Poppying. Walking around in your scarlets is part of what being a Pensioner is all about. But it is a lockdown. It is what it is.” 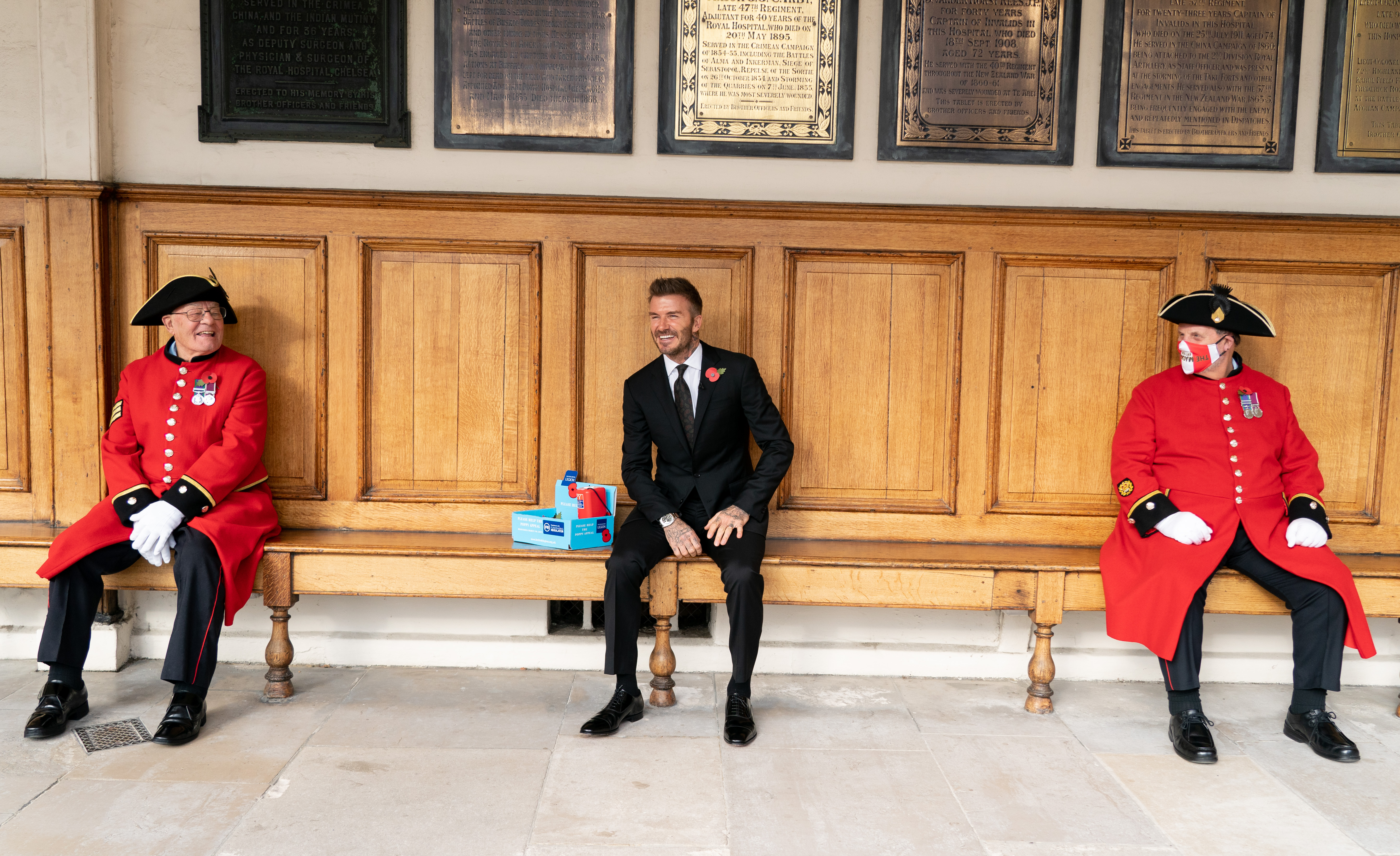 John Byrne, 70, said he missed visitors, adding: “My favourite were the Women’s Institute. The older ladies.

"They have their own banter and I don’t have to be politically correct when I show them round.”

Becks revealed his biggest ­struggle during lockdown had been home-schooling their young children.

David was also teased about playing for Manchester United by the Pensioners, many of whom support Chelsea, Spurs or Crystal Palace.

Lifelong Spurs fan Anthony Hunt, 81, said: “I remember you from our youth team, but you deserted us.”

BRITS have been urged by the Royal British Legion to stand in their doorways and windows for this year’s two-minute silence.

Lockdown has scuppered the wreath-laying ceremonies which would have been held around the country at 11am on Remembrance Sunday.

A second silence honouring our war heroes will be held next Wednesday to mark Armistice Day.

Becks said he also tried out for Arsenal but chose Spurs as an eight-year-old because it was his grandad’s team.

Roger Chapman, 84, a former para, revealed he was a Coventry City fan because he had been evacuated there as child in the war.

He said: “It was just in time for the Blitz. I was in Coventry so I support Coventry.

"Not like my grandson who supports Man United, but he has never been there.”

Becks also bonded with some of the Cockneys over their shared roots.

Terence “Ted” Heath, 68, who served in the Queen’s Regiment, revealed that he used to be a regular punter at the Walthamstow dog track. 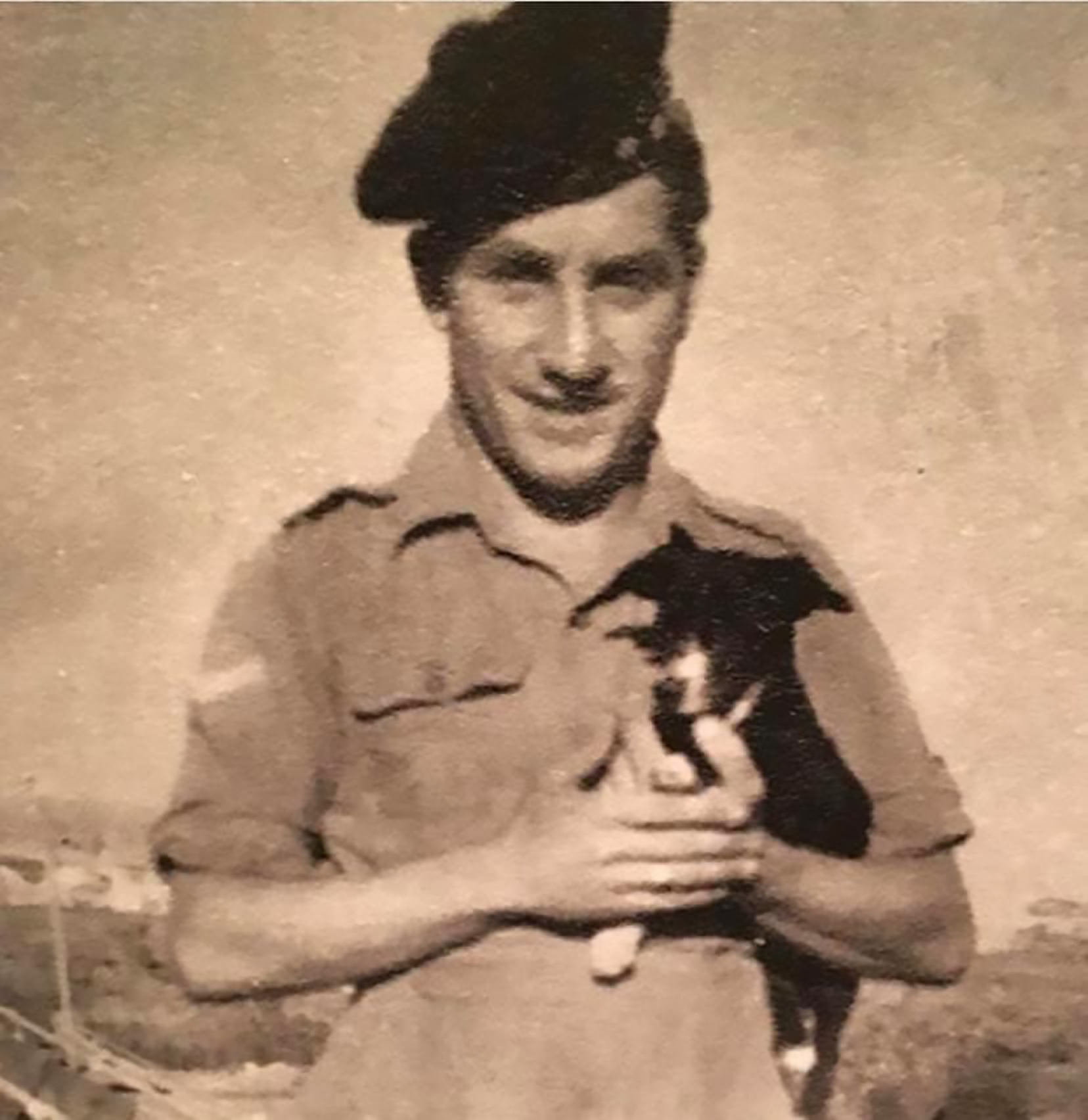 Becks then replied that he worked there as a kid, adding: “I probably collected your glasses.”

There were also connections outside of London. Ex-Lance Corporal Ray Patrie, 81, who spent nine years in the Royal Signals, said he worked as a security guard at an apartment building where Posh and Becks lived.

He added: “It was the posh bit of Manchester.”

The tour included visits to the Pensioners’ allotments and gym. Becks also showed off his skills with a golf putter — and on the croquet lawn.

When he took his first shot with a mallet, Roy Palmer, 81, said: “Eh! You’re all right with a ball.”

WHAT a superstar David Beckham still is­­ — charming the Chelsea Pensioners and backing The Sun’s campaign to save the Poppy Appeal.

With lockdown looming, today is your last day to buy a poppy in person. But you’ll still be able to donate online.

And, even locked down, we can still hold a two-minute doorstep silence for our fallen heroes on November 11.

As Becks says, we owe so much to our veterans . . . and it is vital the British Legion can carry on supporting them.

It must not become a Covid casualty.

Becks also served tea in the cafe before the Pensioners gave him a teddy bear gift for Harper.

Ross Martin, the hospital’s Sergeant Major, said it was a great morale boost for the Pensioners, who he called “living poppies”.

He added: “They’re looking forward to being back on parade as soon as it’s safe.”

How to be a poppy star

THE pandemic may have stopped thousands of sellers from hitting the streets — but it doesn’t have to stop you from buying a poppy. MIKE RIDLEY looks at some of the ways you can do your bit for the appeal by going to:

…OR POP INTO YOUR LOCAL SAINSBURY’S, TESCO, ASDA, ALDI OR MORRISONS AND BUY A POPPY