If you stand back far enough, the view is deeply troubling. The crackdowns, the bans, the intimidation, the jailings. These are being done by a country self-assured in its destiny as a global superpower, confident that control is the only way to stave off criticism. How China exerts that control is increasingly on display to the world.
The refusal to allow Australian MPs Andrew Hastie and James Paterson to join a Beijing study tour because of their past comments on human rights, the leaked internal documents exposing China’s crackdown against Muslim minority groups in its western Xinjiang province and the increasingly violent crackdown on protests in Hong Kong are just recent examples. 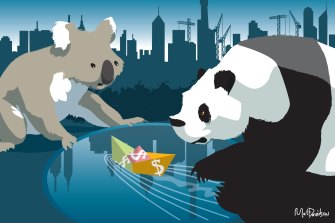 China has not been afraid to freeze relations for what it considers fear mongering over its influence in our domestic affairs.Credit:Matt Davidson

Many have felt the wrath of criticising China.
A US basketball team was banned from Chinese TV after its general manager sent a single tweet supporting Hong Kong protesters, Beijing ordered Cathay Pacific to stop aircrew who supported the protests from operating flights to mainland China or using Chinese airspace, Mack Horton lost a sponsorship deal with a global company that sells into China after his protest against Chinese Olympic swimmer Sun Yang, who is facing doping allegations. The full list is much longer.

In response, while some have dared to criticise, others have been cowed. China’s economic might casts a long shadow. It has steadfastly kept an iron-fist control over its political and cultural institutions. Its leaders have long memories, and a historical lesson it took to heart was the utter chaos that followed the collapse of the Soviet Union. For China, keeping control is paramount to keeping the country together.
Which leaves Australia forced into two-track diplomacy illustrated in the past week by the federal government green-lighting the proposed $1.5billion takeover of Tasmanian infant formula company Bellamy’s by a Chinese company, while at the same time Foreign Minister Marise Payne criticised China for the revelations about mass internment of Uighurs in Xinjiang.
The upside of this should not be forgotten – a point made in a controversial speech by former prime minister Paul Keating yesterday.
China shedding its communist legacy to lift more than 300 million of its people into the middle classes has been a remarkable success story and Australia is stronger and wealthier for the transformation. But it’s an uncomfortable position for Australia to be in, and one that leaves it open to criticism for either being too alarmist about China’s bad behaviour or too accommodating of its human rights record.

And while China is mostly happy to trade goods while swapping the occasional barbs, it has not been afraid to freeze relations for what it considers fear mongering over its influence in our domestic affairs.
How does Australia move forward with such a complex web of priorities? Our principles must be explicit: Australia should never stop reminding China of its human rights obligations. Australia should never allow foreign countries to interfere in our political system. Australia should never forget that strong economic ties have provided substantial real benefits to many millions of people.
But talking trade without, at the right time, taking a stand on issues we believe in will land us in the transactional world of US President Donald Trump in which everything is measured by financial benefit. That is not a world Australia should accept.