A string of bad debts has brought down one of Melbourne’s most celebrated pizza empires, Woodstock Pizzicheria, which was once the target of repeated mafia-linked drive-by shootings.

Woodstock survived Melbourne’s infamous 2013 mafia pizza wars, but champion pizza maker Anthony “Tony Woodstock” Cannata and his family have shuttered five restaurants since 2020 after businesses in the group racked up debts of more than $6.4 million and in some cases failed to file tax returns or pay superannuation for years. 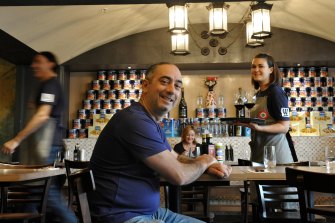 In an apparent last ditch bid to stay afloat, Cannata and his elderly parents have also turned to private moneylenders for $4.7 million in loans at interest rates of up to 29 per cent that are set to come due in just two months, according to mortgage documents filed with the Victorian land titles office.

Cannata, who was elected Australian president of the Federation of Italian Pizza Makers in 2018, is widely credited with introducing Melbourne to wood-fired pizza after the family opened its first restaurant in Fitzroy North in 1994.

But his ambitions to found a new pizza empire made him a target of Melbourne’s powerful ’Ndrangheta mafia clan which part owned a competing chain and allegedly runs an extortion-protection racket in the hospitality industry and wholesale fruit and veg market.

Woodstock’s Brunswick East, Essendon and Fitzroy North shops were hit in a triple drive-by shooting shortly after customers left one night in November 2013. Months later a gunman fired multiple rounds into the windows of the Essendon outlet in another attack. 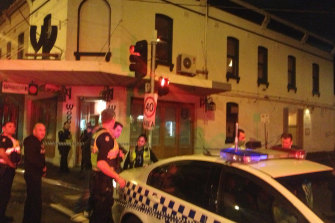 Police outside Woodstock Pizzicheria in Brunswick East after shots were fired into the building in 2013.Credit:Chris Vedelago

Victoria Police’s Purana anti-gangland taskforce has since linked senior Calabrian mafia figure Francesco “Mad Frank” Madafferi to the shootings, according to intelligence reports and court documents. At that time, Madafferi was a part-owner of the La Porchetta restaurant chain.

No one has ever been arrested over the attacks. Madafferi is currently in jail for drug trafficking but is appealing his conviction because police had been obtaining information about him from his former lawyer, murdered solicitor Joseph “Pino” Acquaro. 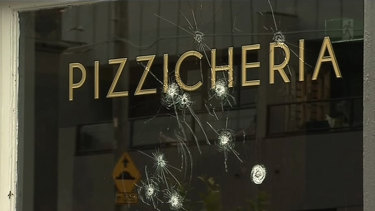 The Woodstock group went on to open more restaurants in Chadstone, Doncaster and Moonee Ponds, with Melbourne’s foodie culture lionising Cannata as the “prince of pizza”.

“From Australian Pizza Champion to competing in the World Pizza Championships in Napoli, Parma and Las Vegas, he’s been ranked consistently in the top 10 in the world. He’s bloody good at what he does, and does it with that classic, authentic Italian charm,” according to Woodstock’s promotional materials. 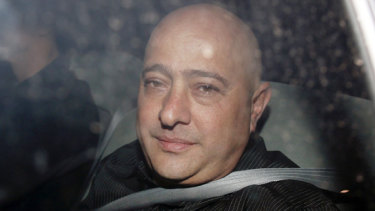 But with four of the restaurants — Fitzroy North, Essendon, Chadstone and Doncaster — now in the hands of liquidators and the family’s commercial property portfolio in Fitzroy North locked into a series of high-interest loans about to come due, Cannata’s current location is something of a mystery.

Sources familiar with the business but not authorised to speak publicly have claimed that Cannata is currently in Italy, while another former employee said the 54-year-old was hiding in Queensland.

Liquidators GS Andrews Advisory, which did not respond to a request for comment, told creditors in March that Cannata had gone overseas, “owes substantial sums pursuant to personal guarantees and is involved in a marital dispute”, documents show.

Cannata did not respond to requests for comment. A family spokesperson, who asked not to be identified, also declined to comment on the collapse of the business, or where Cannata is currently residing.

According to reports filed with the Australian Securities and Investments Commission, Cannata has claimed his pizza empire fell victim to “COVID-induced lockdowns”.

But the Australian Taxation Office alleges that some entities in the Woodstock group have failed to pay any staff superannuation since 2014, or file income tax returns and GST activity statements since 2018. The ATO is owed more than $900,000, according to documents filed by the liquidators.

The Age has also spoken with several employees who have been pursuing the company since 2017 over unpaid superannuation and other entitlements.

“Everything was done in cash, and at one point he had to get a loan to cover the superannuation that he owed us,” a former employee said.

Another Woodstock outlet in Moonee Ponds has also been closed.