The calls for Daniel Andrews to be hauled before Victoria’s anti-corruption commission to face coercive questioning in a public hearing about the alleged misuse of taxpayer funds for political purposes are misguided.

The Independent Broad-Based Anti Corruption Commission (IBAC), much like its more aggressive counterpart in NSW, tends to hold a public hearing only if it has strong evidence of alleged wrongdoing. This is for good reason. 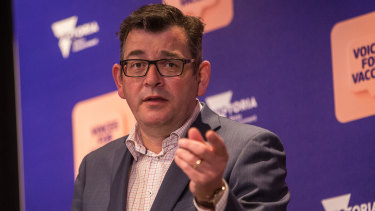 There has not been any hard evidence that Andrews has directed public resources be used for dodgy political conduct.Credit:Scott McNaughton

The public hearings are an inquisitorial process seeking to reveal serious corruption to the public and to prevent it from happening in the future. The hearings are not criminal prosecutions and cannot produce criminal convictions or lead to jail sentences. That is the job of the courts.

The reason state governments have agreed to give corruption watchdogs such extraordinary public hearing powers is because they (mostly begrudgingly after major scandals) have recognised that public sector and political corruption is hard to detect and even harder to successfully prosecute through the traditional court system. Yet corruption is such a poison in our community, extreme measures such as public coercive hearings are required to expose it.

To be called to a coercive hearing is an unpleasant thing. I know because I’ve been hauled before several of them, thankfully in private, to share my knowledge about police and political corruption. The “coercive” part of a hearing involves laws that make it an offence to refuse to answer questions truthfully. This involves the removal of a fundamental legal right to refuse to answer a question if it could incriminate you.

As I was called to testify about others, this wasn’t a concern for me, but in one hearing I was asked to reveal a source. I refused, the hearing was shut down, and I was told I would be charged. I’ll never forget the experience. It was so distressing that I vomited. I was lucky that senior officials decided not to authorise the criminal brief against me, but it gave me an insight into just how powerful coercive hearings are, even more so if they are held in public.

Still, I support public hearings when a corruption agency has found enough evidence of serious alleged corruption to warrant them. In the case of former Victorian minister Adem Somyurek, some of that evidence has already been exposed. Last year, The Age, The Sydney Morning Herald and 60 Minutes published secret recordings of the politician directing the abuse of taxpayer resources.

There have been only three days of IBAC’s scheduled five-week public hearing into the Somyurek affair, but it is already obvious that the commission gathered a lot of evidence about taxpayer rorting before deciding to go public. In NSW, it is also clear that ICAC has strong evidence, including phone tap material played at previous hearings and documents raised in Parliament, that have raised serious questions about the conduct of former premier Gladys Berejiklian.

To date, there has not been any hard evidence that Andrews has directed public resources be used for dodgy political conduct, such as branch stacking. If IBAC has such information, it should act. In respect of the Premier, I’ve tried to dig it up myself because I was tipped off that it may be out there. But I haven’t found it. Neither, apparently, have those calling for Andrews to be hauled before IBAC to face a public grilling.

Don’t get me wrong – I believe that it is likely Andrews at least knew of historical branch stacking in the 1990s. But it’s not IBAC’s job to investigate branch stacking, which is not illegal. Rather, the commission is examining the abuse of public resources, which might have been used for branch stacking or to pay a relative a salary for a job they never actually performed.

Andrews can be held accountable for turning a blind eye to the suspected abuse of public resources by those in Labor’s various factions, including his own. This is especially so because Labor was put on notice by the media, especially the Herald Sun, and the Ombudsman between 2014 and 2018 about similar rorting.

Without compelling evidence of Andrews engaging in, or supporting, Somyurek-style taxpayer funded alleged rorting, the proper place for scrutiny about whether he ignored such goings-on is in the media, the Parliament, the community and ultimately at the ballot box. There is, as yet, no case for Andrews to go before an IBAC coercive public hearing.

Some of those demanding Andrews face a public grilling, including commentators and politicians, have not produced any credible evidence of Andrews’ abuse of public funds.

After Somyurek was caught out on hidden cameras last year, some of these same voices gave Somyurek a fairly uncritical platform to attack Andrews and his other enemies. They included federal MP Anthony Byrne, who was appropriately called to IBAC this week to account for his actions and, most disturbingly, another staffer who Somyurek suspects did much to expose his alleged corruption.

The most impressive backflipping is being performed by political operatives and journalists who previously dismissed taxpayer-funded branch stacking as no big deal because every party did it, but who now clamour for Andrews to be served a coercive questioning summons.

Last week, The Age revealed that IBAC was examining Andrews’ behaviour in connection to another scandal, that involving the United Firefighters Union. After much debate, it was decided that the reporting of this was in the public interest because we had confirmed that IBAC’s investigation had progressed to direct scrutiny of the Premier’s interactions with a union boss over a deal that had major taxpayer and public policy implications.

Yet, there was a clear distinction made with Berejiklian’s NSW ICAC scrutiny, because Victoria’s IBAC had not yet called a public hearing into Andrews in respect of the United Firefighters Union affair. This suggested that IBAC was yet to dig up enough hard evidence of alleged corruption to justify it using its public hearing powers. Perhaps that day will come. But until then, IBAC should keep using its extraordinary powers behind closed doors to examine the Premier’s role in the union affair.