Desmond Clark entered public life as a Melbourne City councillor in 1985 and was actively involved in making a difference to the civic and cultural life of the city he loved. A distinctive figure, tall and elegant, he was known for his dry wit and outgoing personality, respected for his strong values and capacity to manage complex change.

Janet Whiting, lawyer and president of the NGV trustees who worked with Clark at the film festival, reflecting on Clark’s life, claims his passion for the cultural sector was accompanied by sustained clear leadership. “He had great ambition for the sector, facilitating growth through infrastructure, artistic support, high quality and an expanded reach, most particularly in the film and music sectors. While more committed to the arts than sport, he also understood the value of that sector to much of the community. This was reflected in his role as one of the foundation trustees of the National Tennis Centre Trust (now Melbourne Park).”

Clark was one of five children. His father was a station master whose work involved regular family moves throughout Victoria with the attendant changes in schools. On completing his secondary education, Clark qualified to study law but the necessity to be self-supporting led him to accept a teaching studentship with the Victorian Education Department, attending Melbourne Teachers’ College, RMIT and finally the University of Melbourne, where he studied fine arts. It was at a life drawing class at RMIT where he met his future wife, Irene, an artist who would go on to greatly support him throughout his career.

After their marriage, the Clarks travelled in Europe and lived for a time in the London of the ’70s. On returning to Melbourne, Clark taught art and graphic design in several high schools. Initially, the couple settled in Canterbury but in 1980, bought a Victorian terrace house in East Melbourne. It was a move that changed Clark’s life.

Increasingly frustrated with local development issues, Clark joined the East Melbourne Group, a powerful residents association formed in 1953 to protect the outstanding historic integrity of the area. It was the first such citizens’ group established in Victoria. Clark was president from 1983 to 1985 when the major issue was the erection of 85-metres light towers at the Melbourne Cricket Ground – taller than the nearby Hilton Hotel.

The East Melbourne Group’s opposition to the towers was supported by the late Norm Gallagher and his Builders Labourers Federation, which placed a ban on the project. Clark joined the picket line in a protest he found to be “fairly scary”. He successfully negotiated with the MCG trust and the state government to modify the height of the towers. The subsequent completion of the multimillion-dollar refurbishment at the MCG resulted in a greatly expanded cricket, football and live-music program. Clark worked in conjunction with the MCG trust and state government to minimise the environmental and social impact on the surrounding area and community.

His experience with the East Melbourne Group exposed Clark to local government and gave him the scope to engage in a very different world from that of teaching. He found within himself a capacity to negotiate, to compromise, to get things done.

He stood for the Melbourne City Council in 1985 and served three terms, engaging in a range of issues concerning the city and his local community. He was central to the planning of the redevelopment and construction of the tennis centre complex. Another initiative to which he was enthusiastically committed was the renewal of the city’s public parks and gardens.

In 1992, Des Clark was elected lord mayor of Melbourne and presided over some complex and controversial matters including the council’s mode of operation and its workforce. He prevented the demolition of the Regent Theatre which the National Trust had refused to save. Without Clark’s support, David Marriner’s magnificent redevelopment would not have happened. 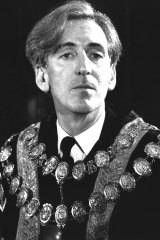 Perhaps the most exciting initiative during his time as lord mayor was “Postcode 3000” aimed at revitalising the CBD after the late 1980s property crash. The city, especially at night and during weekends, was moribund. “Postcode 3000″ brought new life, introducing residential development which in time attracted a vibrant cafe and restaurant culture.

In late 1993, the newly elected premier of Victoria Jeff Kennett ordered a complete restructure of local government across the state. All local councils were dismissed leading to bitter division. Clark’s pragmatic position in accepting the inevitability of local government reform, however, was generally opposed by other councillors.

His year in office completed, in 1994 Clark was appointed chief commissioner at the City of Port Phillip, the most politically and financially difficult of the local government mergers, amalgamating Port Melbourne, South Melbourne and St Kilda. During his two years as chief commissioner, Clark represented the local community in negotiations with the state government over the grand prix and redevelopment of Albert Park; negotiated a partnership with the state government to establish the Melbourne Sports and Aquatic Centre and the creation of a home for the National Academy of Music at the South Melbourne Town Hall. `

Particularly rewarding to Clark, given his love for the arts, was his work with film. In 1993, he joined the Melbourne International Film Festival and was chairman from 1996-99. At the time, the festival was located in the Astor Theatre, St Kilda, and was losing money and audiences. Clark brokered a deal (part sponsorship, part commercial) with Village Cinemas whereby the festival moved to several Village cinemas in the city. Box-office earnings and sponsorship trebled, and the festival was to become one of Melbourne’s premier cultural events.

For the rest of his working life Clark’s career continued to focus on film. In the 1990s, he was influential in the establishment of the Australian Centre for the Moving Image. In 1998, he became deputy director of the Australian Film Commission and two years later was appointed by the Commonwealth Government to run the Office of Film and Literature Classification, formerly known as the chief censor’s Office, located in Sydney.

After seven years in this position, during which he introduced a more comprehensive and wider community involvement in censorship, Des and Irene Clark returned to Melbourne, where he continued to be actively involved with the arts. He sat on the boards of the Melbourne Recital Centre, the Australian Centre for the Moving Image and Docklands Film Studios.

In 2011, they bought an apartment in Berlin and spent six months of each year there relishing the energy of the revitalised city, which, in some respects, was a mirror image of their life in Melbourne.

Clark died in November 2020 after a long illness. He is survived by his wife Irene.