Another day, another record. The 230 majority against the motion to approve Theresa May’s withdrawal agreement on the UK’s exit from the EU smashes pretty much any parliamentary record one cares to discover. 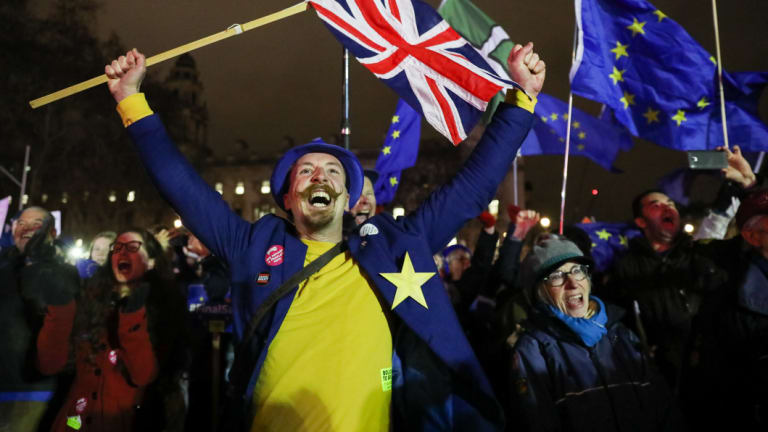 Anti-Brexit protesters react to the historic vote outside parliament.Credit:Bloomberg

That May’s immediate response was to make time for the house to debate and vote on Labour’s motion of no-confidence in her the day after her loss was thus hardly a surprise: how else to respond to such a heavy blow against the central platform and policy of the government?

And yet the abiding impression of these events was of avoiding a resolution, for as long as possible. Most obviously, May did not offer her resignation. That was a reflection not of her principles but rather her analysis of the situation. As she noted in her statement, a lack of majority for her deal doesn’t mean there’s a majority for another course of action. Without that alternative majority, she clearly feels there is still everything to play for and she is the right person for the job.

In essence, what May offered parliament was a “put-up or shut-up” proposition. Should the government win the confidence motion – which looks very likely indeed – she will hold a series of cross-party talks, inviting parliament to bring ideas and suggestions about how to build a majority position. The results will then be put to the EU for negotiation and agreement. 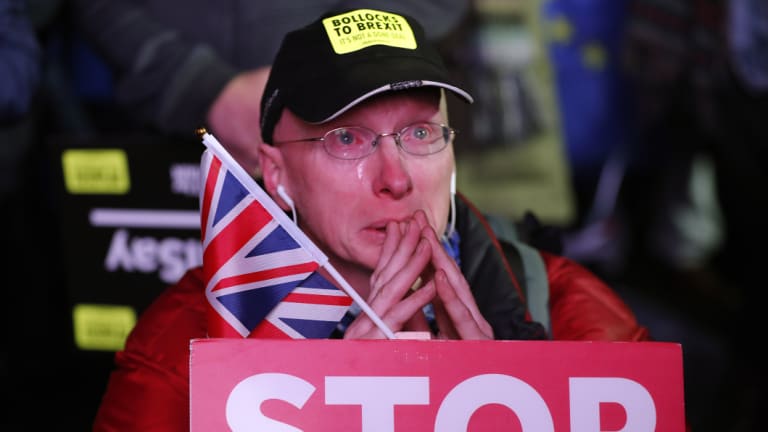 An anti-Brexit demonstrator cries as he gathers in Parliament square in London.Credit:AP

The only two changes that might win over the kinds of numbers of MPs to secure a majority both look problematic. For Tory backbenchers or the DUP, the big bone of contention is the backstop arrangement on Northern Ireland. A limit on its application or the power for the UK to decide alone not to use it would have a very big impact on the support the government could get. Yet this is clearly not going to gain the support of the EU, which sunk very deep red lines around that part of the agreement. It cannot move those lines without compromising the interests of one of its own member states.

Much more acceptable to the EU would be the other possible change: a commitment to a much softer Brexit, staying in the single market and the customs union, which would bring a lot of opposition parties on-side. In this case, the problem would be domestic: does May want to be propped up by the opposition; does the opposition want to prop up the government; and can May give up the one thing that has been central to her Brexit plans – an end to free movement?

In short, the offer to parliament is intended to demonstrate that despite all its faults and Tuesday night’s hammering, the withdrawal agreement is still on the table, agreed by the EU and there to potentially be put to another vote following further discussions and guarantees.

Thus we might find ourselves repeating this vote, with no substantive changes to the text and ever greater uncertainty about what will happen on March 29.

May’s withdrawal agreement might still have a future, but this vote means that it is unlikely ever to become a popular and positive choice for parliament, or for the public in general. Being the least-bad option could yet it over one hurdle, but it points to the bigger questions that the UK still has to face – what does its future relationship with the EU actually look like?

Simon Usherwood is a Reader in Politics at the University of Surrey. This article is republished from The Conversation under a Creative Commons license. Read the original article.