It would hardly surprise many that Melbourne has fallen down the rankings in The Economist’s 2021 global liveability index, dropping from second to eighth. Coming out of the city’s latest two-week lockdown, the fourth since the pandemic began, many of Melbourne’s most notable strengths – its culinary and cultural sectors would top the list – have been hit for six.

Melbourne will be a different city post-pandemic. People’s work, shopping and entertainment habits have been so upended for such a long time that returning to any form of “normal” will, in all likelihood, not reflect what once was but, rather, a new reality. 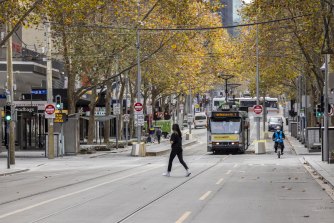 Melbourne’s CBD has been hit hard again by the latest lockdown.Credit:Wayne Taylor

The most conspicuous fault line that has materialised since COVID-19 is the central city-suburban divide. As people have stayed closer to home, they have, in many instances, given fresh life to local businesses. Adele Hegedich, mayor of Wyndham in Melbourne’s far west, said it best when she remarked that “the virus has inadvertently, finally, realised the 20-minute neighbourhood”. But it has come at a cost.

While people had started returning to the CBD prior to the latest lockdown, foot traffic was still down by 45 per cent compared with the pre-COVID average, despite city workplaces being able to bring back 100 per cent of staff.

The state government and Melbourne City Council have offered an array of financial incentives for people to return to the city, but each lockdown has put a dent in that process. A lack of tourists and the inability of foreign students to enter the country have not helped.

Melbourne is hardly alone. London’s tourist board recently rolled out its biggest ever domestic marketing campaign in an effort to woo people back to the city’s major tourist attractions. Britain’s domestic tourism revenue dropped by nearly two-thirds last year and, to make matters worse, most British people who did holiday headed for coastal and rural destinations over the city.

Melbourne’s future is at a crossroads. Government policies will play a role in shaping the future of this city, but it will be some time before their effectiveness can be gauged. There is only one sure bet: Melbourne will not snap back to its previous incarnation. Too many businesses have shuttered, new ones have come to life and most people’s work lives have indelibly changed.

That is to be expected. Since the town of Melbourne was granted its city status in the late 1840s by Queen Victoria, its fortunes have waxed and waned on the back of wars, a gold rush, its boom and bust property market and industrial sector, and, in later years, its ability to transform itself into a vibrant and cosmopolitan city worthy of its reputation as a highly desirable place to live.

At the risk of being accused of parochialism, it should also be noted that, despite the number of lockdowns Melbourne has suffered through, on the global liveability index it still came out ahead of a certain capital city best known for its harbour views. Sydney has fallen out of the top 10, dropping more places than Melbourne.

As Melburnians prepare to venture out from their homes again for more than the designated “five reasons”, we should remind ourselves that, for all of its shortcomings, it is a wonderful place to live.

Gay Alcorn sends an exclusive newsletter to subscribers each week. Sign up to receive her Note from the Editor.