After the sudden death of Dog the Bounty Hunter’s co-star – Dailymail.com dives back into the long list of tragedies that have haunted the show: From two dead children, four divorces and domestic abuse to a drug deal ending in murder

Duane Lee Chapman, better known as Dog the Bounty Hunter, has barely spent a moment out of the spotlight since sky-rocketing to fame in 2004.

His reality TV shows where he and his family hunt down fugitives were an instant hit – as was his signature long blonde hair, leathery tanned skin and wraparound sunglasses.

But despite his early success, the famous tough guy’s personal life has been tinged with more than his fair share of tragedy.

Most recently, he bid an unexpectedly early farewell to his former ‘right-hand man’ and co-star David Robinson.

Robinson, 50, died suddenly on Wednesday after collapsing during a Zoom call at his dining room.

He and Dog had started working together on the short-lived WGN show Dog’s Most Wanted in 2019. At the time, Dog was shown struggling to balance his career with his then-wife Beth’s cancer diagnosis.

In a statement to TMZ, Dog said he was ‘shocked and saddened by the sudden loss’. No official cause of death has yet been determined, and Robinson’s wife, Brooke, told TMZ her husband had been ‘very healthy’.

But this is just latest in a long line of tragedies to plague the popular TV personality. Here Dailymail.com looks back at the turmoil the 69-year-old has encountered over the decades. 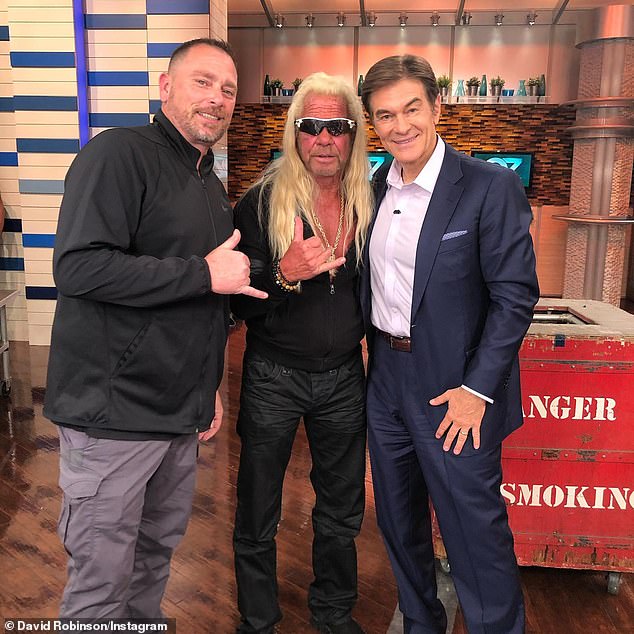 David (left), Dog and Dr. Oz.  David Robinson and Dog starred together on the short-lived Dog’s Most Wanted series, in which the two hunted fugitives 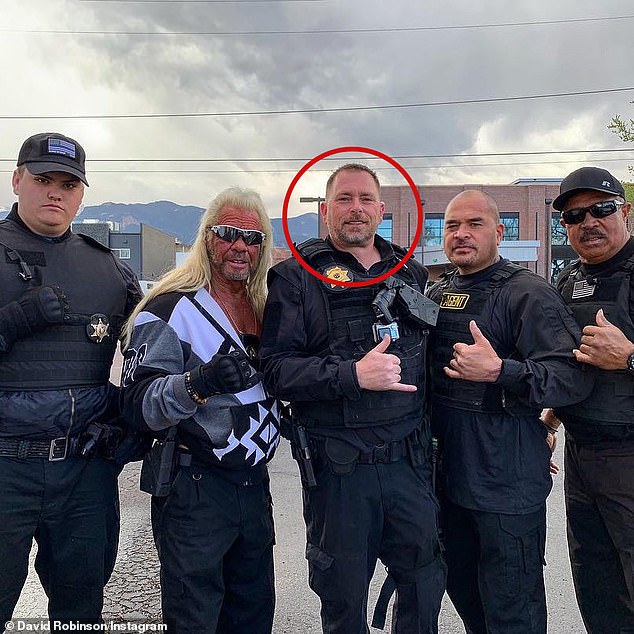 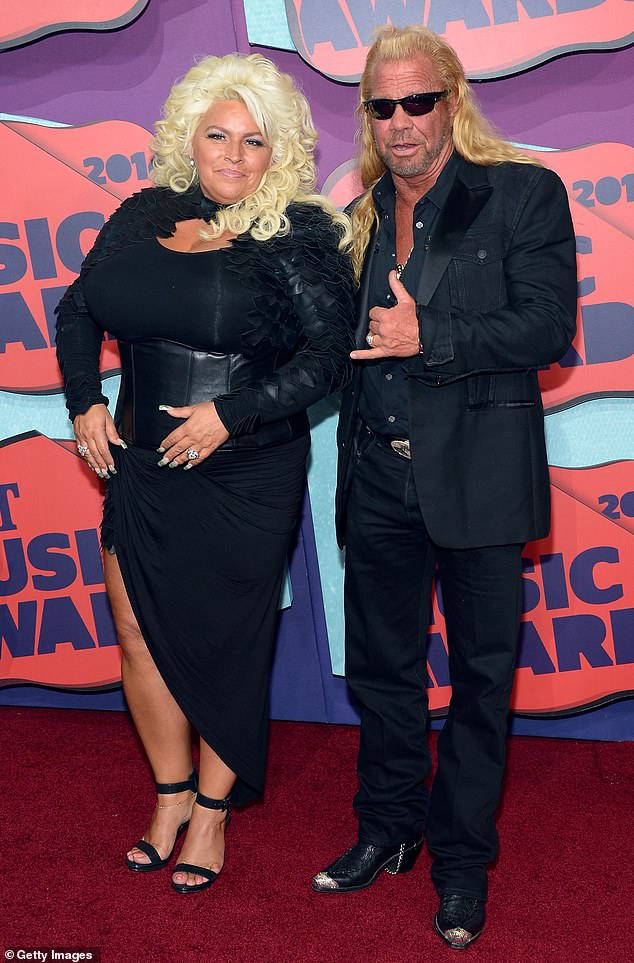 Dog and his beloved wife Beth, to whom he was married from 2006 until her death in 2019 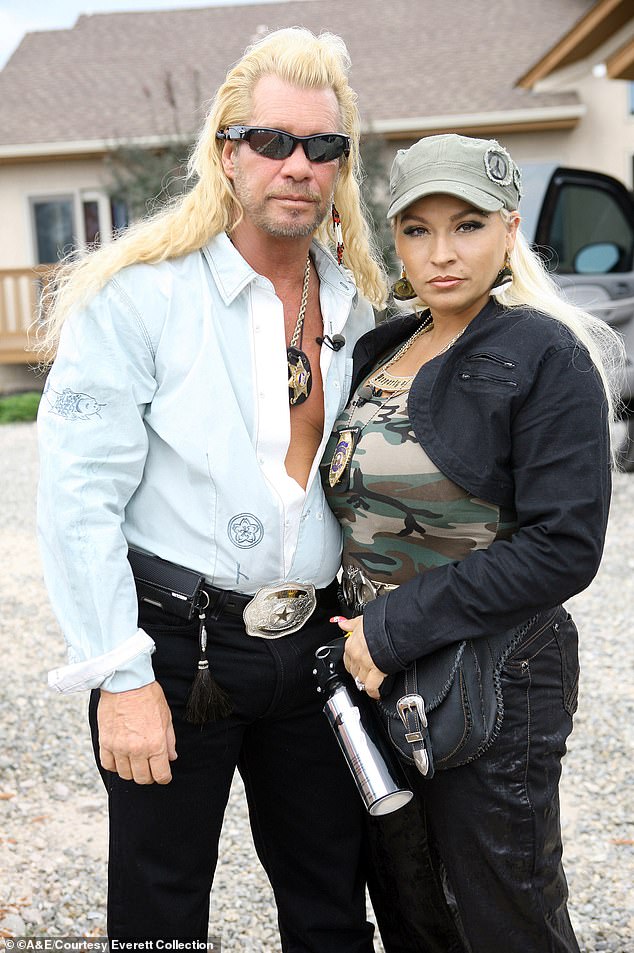 Beth, who died in 2019, called Dog the love of her life. The pair wed in 2006 after having an affair for years beforehand

RISE TO FAME AND THE LOSS OF HIS ONE TRUE LOVE

Dog rose to fame in the early 2000s after successfully tracking down convicted serial rapist Andrew Luster, the heir to a cosmetics fortune.

Luster had vanished during his trial for a series of rapes, in which he was alleged to have drugged his victims and then filmed himself having sex with them. Dog eventually captured him in Mexico.

This led to the launch of his reality TV show Dog the Bounty Hunter, in 2004, and his slogan was: ‘Born on a mountain, raised in a cave, arresting fugitives is all I crave.’

But during later show, the audience watched him struggle to cope with his wife’s cancer diagnosis and ultimate death in June 2019.

Beth Smith – Dog’s fifth wife – had been diagnosed with a stage two cancerous tumor growth on her throat in 2017. She underwent a 12-hour surgery to remove the plum-sized tumor, which was documented in the A&E special Dog & Beth: The Fight of Their Lives.

After being declared cancer-free following the surgery, it returned in November 2018 and she died aged 51 some eight months later in Hawaii. 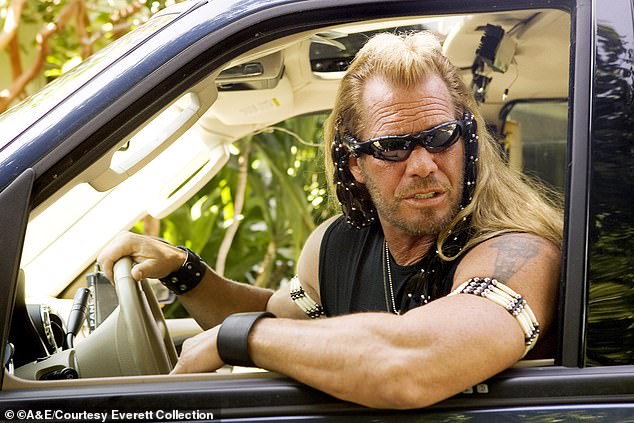 DAUGHTER WHO DIED IN A CAR CRASH DAY BEFORE HIS WEDDING

In 2006, just one day before his wedding to Beth, Dog’s eldest daughter – Barbara Katy – died in a car crash.

The 23-year-old was killed when the SUV she was travelling in, which turned out to be stolen, rolled and crashed into a tree. The driver of the vehicle, Scott Standefer II, was also killed in the accident, which occurred near Fairbanks, Alaska.

Barbara was the eldest girl among Dog’s dozen children and had reportedly attempted to use a stolen credit card to rent a room at a hotel about 50 miles outside of Fairbanks before the fatal crash.

Investigators said at the time that they did not have a good understanding of why the car suddenly turned off the road.

‘There are absolutely no skid marks on the road. They just went off the road, hit and embankment and launched,’ authorities said.

The remaining children of Dog gathered with their father and a minister to determine whether they could or should go on ahead with his planned nuptials the next day.

The wedding party did go continue as planned and doubled as a celebration of his daughter’s life.

Dog had also previously lost a son, Zebadiah Chapman, who he had while with his second wife Ann Tegnell. The boy, who was born on January 1, 1980, died just 30 days later. The cause of death has not been reported. 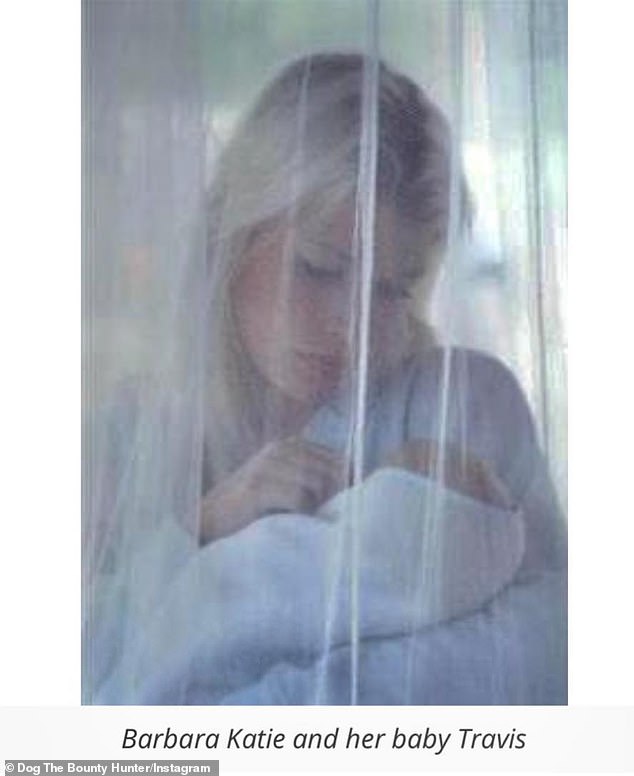 Dog’s eldest daughter, Barbara, tragically died in a car accident at the age of 23 just one day before Dog was set to marry Beth in Hawaii 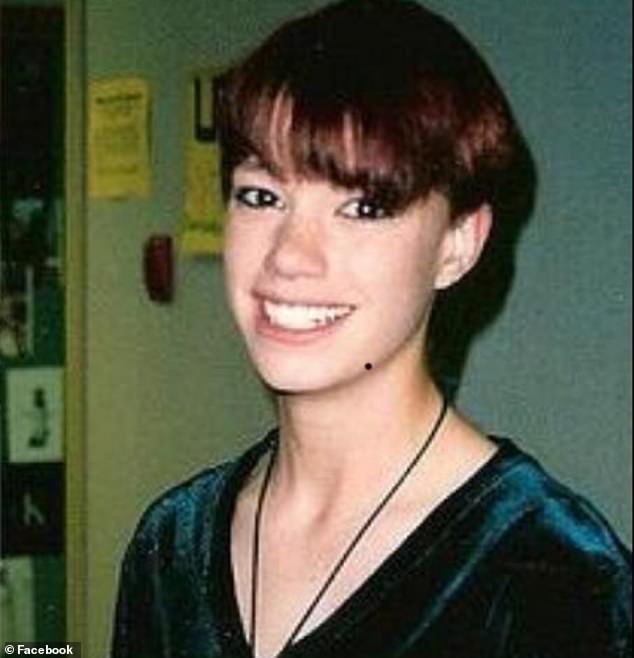 Barbara died after the stolen SUV she was riding in flipped and crashed into a tree. It was later discovered that she and the man she was with had attempted to use a stolen credit card to check into a nearby hotel in Alaska 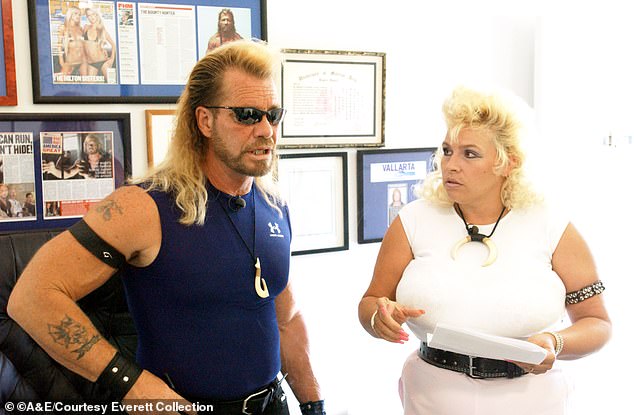 Beth and Dog during an early episode of their initial A&E reality show, which documented the family’s bounty hunting lifestyle

FORCED TO STEP IN TO PROTECT HIS GRANDSON FOLLOWING ABUSE CLAIMS

Half-a-decade after his daughter’s tragic passing, Dog was awarded temporary custody of then-nine-year-old Travis, after a judge heard a shocking audio recording of the boy’s father allegedly beating his son.

Dog said that listening to the tape of his grandchild being pummeled ‘was torture.’

‘I was beaten by my father, too,’ he said. ‘But we have to break that cycle.’ Dog had first revealed he was abused by his father in childhood in his 2007 autobiography You Can Run But You Can’t Hide.

‘As a young boy, I never knew other kids didn’t get hit by their dads,’ he wrote.

Physical abuse at home was something he viewed as a ‘rite of passage’ that all sons endured. ‘I simply didn’t know anything different.’

‘Just thinking of the abuse I endured can make me cry…I was expected to take it like a man. But I wasn’t a man. I was a young boy looking for love and approval from my father. I was desperate for his affection, so I ignored the pain,’ he wrote. 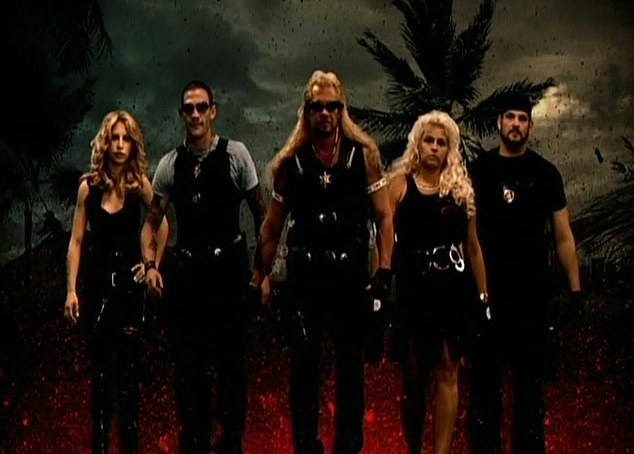 Time and again tragedy befell the reality show family, with Dog losing his daughter, wife, and dealing with a series of tumultuous personal matters, many of which air out in public

THE DRUG DEAL THAT LED TO MURDER, JAIL TIME AND ONGOING STRUGGLES

Dog’s tumultuous childhood led to an early life of crime and imprisonment. In Texas in 1976, Dog found himself waiting in a car while his friend purchased marijuana.

Everyone involved in the incident was charged with murder and ultimately found guilty.

Despite appearing to recover personally from his 18-month imprisonment, his criminal record is something that follows him around to this day.

A few years ago, when Dog was cast on the UK version of Celebrity Big Brother, he found himself unable to compete after his visa request was denied by the foreign country.

Following Beth’s tragic passing, Dog was also handed some challenging medical news of his own after suffering alarming chest pains at his Colorado home.

He was later diagnosed with a pulmonary embolism, a potentially fatal blockage of the arteries. He revealed doctors advised him to stay in the hospital and receive treatment, but he refused and fought his way past an orderly to check out.

In the same interview with the New York Times, Dog, who was for the first time in a decade-and-a-half without a TV contract, also admitted he had run out of money.

Though his net-worth was at one time estimated to be in the millions, it seemed his late wife’s extensive medical treatments had wiped him out and he was on the precipice of losing his Colorado home.

On his television show, Dr. Oz later told Dog that he was doing himself and his loved ones a disservice by ignoring his serious medical issue.

‘You’re a ticking time bomb. You aren’t going to be here with the heart the way it is right now,’ Oz told him.

Here’s to hoping Dog does watch his health because he recently walked down the aisle for a sixth time. In 2021, he married Francie Frane, 53, in Colorado. He revealed his relationship with Frane nearly ten months after Beth’s passing.