New York: Monday was Presidents' Day in the United States – a national public holiday created to mark George Washington's birthday but that now honours all those who have served as president.

Protesters in major cities like Chicago, New York and Los Angeles used their day off to hold rallies opposing Donald Trump's decision to declare an emergency at the US-Mexico border. 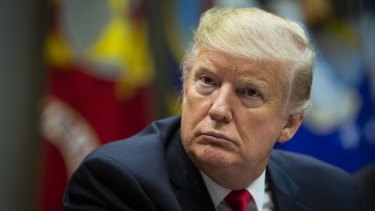 Meanwhile Trump was at Mar-a-Largo, his members-only resort in Florida, where he engaged in two of his favourite pastimes: a morning game of golf and a flurry of dark and angry tweets.

Trump tweeted that he had been the victim of an "illegal coup attempt" by "treasonous" officials in the FBI and the Department of Justice – including a senior official who remains in his job.

The President was responding to a 60 Minutes interview that aired the night before with Andrew McCabe, the former deputy director of the FBI. He is promoting a new book titled The Threat: How the F.B.I. Protects America in the Age of Terror and Trump.

The interview was the first time McCabe has spoken publicly since he was fired by the Trump administration last March. 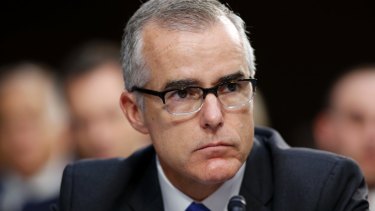 McCabe confirmed reports that, following the firing of FBI Director James Comey in 2017, Deputy Attorney-General Rod Rosenstein had offered to wear a wire to secretly record his conversations with Trump.

He also confirmed that Rosenstein had discussed invoking the 25th Amendment – a clause of the US Constitution that allows for the president to be removed from office by the vice president and a majority of cabinet members.

McCabe said he believed at the time that Trump's decision to fire Comey may have constituted a crime – namely obstruction of justice. 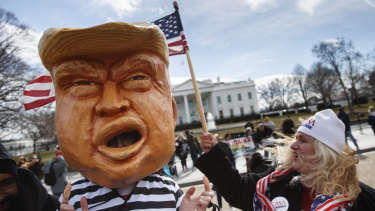 A person dressed to look like President Donald Trump in a prison uniform, and others gather in front of the White House in Washington.Credit:AP

One of Trump's closest allies in Congress, Republican Senator Lindsey Graham, promised to launch a Senate inquiry into the claims.

Rosenstein, who remains in his position at the Justice Department, could be ordered to appear.

"There’s an allegation by the acting FBI director at the time that the deputy attorney general was basically trying to do an administrative coup," Graham said.

Trump tweeted: "This was the illegal and treasonous 'insurance policy' in full action!"

He also approvingly quoted the verdict of Fox News contributor Dan Bongino: "What was laid out last night . . . was a coup attempt on the president of the United States."

In the interview, McCabe also said that Trump had dismissed the advice of US intelligence officials on North Korea's nuclear capabilities, preferring instead to believe Russian President Vladimir Putin.

McCabe recounted a meeting in which Trump said he did not believe North Korean missiles could strike the US mainland because Putin had told him such missiles did not exist.

When told this was not consistent with the findings of his intelligence agencies, McCabe says Trump replied: "I don't care. I believe Putin."

McCabe described the statement as "shocking" and "astounding".

McCabe was reprimanded last April by the Justice Department's inspector general for misleading investigators regarding unauthorised leaks to the media.

Trump has also repeatedly targeted him because his wife ran for a Virginia Senate position as a Democrat and received funding from an ally of Bill and Hillary Clinton.