Police have urged Victorian drivers returning from NSW not to take risks on the roads in a rush to get home.

New Year's Eve turned to traffic chaos after the state government announced the border would close from 11.59pm on Friday in response to a growing number of coronavirus cases across both states. 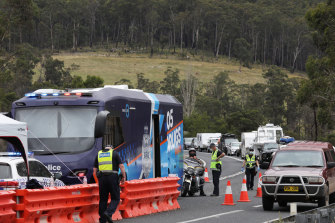 Long lines of traffic at the border checkpoint in Genoa in eastern Victoria on Friday.Credit:Rachel Mounsey

Assistant Commissioner Libby Murphy said she had significant concerns about the impacts of fatigue and drink driving on motorists.

"My advice to anyone is do not risk going to jail, do not risk maiming your family for the sake of getting across a border town when there's other options open and available to you," she said on Friday.

Deputy Commissioner Rick Nugent said no incidents of drink driving had been reported by officers at border checkpoints.

He said police had received public health advice to wave cars with Victorian number plates through border crossings to alleviate Thursday's traffic crush and deal with the dangers of leaving children and elderly people waiting for hours. 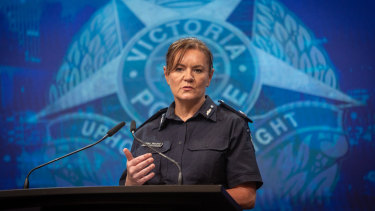 "The concern was for those people stuck and with that anxiety and stress and the health and wellbeing of people there."

"When it's really clear it's a holidaymaker, Victorian plates, a whole family, the risk is low."

Every car with NSW or non-Victorian license plates was checked and by Friday the average wait time to get through a border checkpoint was 15 minutes.

Ms Murphy announced there had been 213 deaths on Victoria's roads in 2020, equalling a record set in 2018 for the lowest number of fatalities since Victoria's road toll records began in 1924.

Despite the lower number of deaths on the road last year, police said that if the reduced amount of traffic was taken into account, there had actually been a major lift.

"In terms of COVID, people may say numbers are down, but per 10,000 vehicles on the road there has been a significant increase, which is a concern for us," she said.

"We saw some significant and concerning behaviours while lockdown occurred.

"Levels of speed over 140km/h were staggering. That has now backed off with more vehicles on the road."

There were 15 road deaths each during May and July, the lowest monthly total for these months on record.

While there were 53 fewer fatalities than last year, Ms Murphy said this was of little comfort to grieving families throughout the state.

"This is not just data, it's actually reflective of a number of people who were very dear to our community," Ms Murphy said.

Provisional data showed 34 per cent of fatalities had been caused by speed and 21 per cent caused by alcohol misuse.

Mr Nugent said a decrease in public activity on New Year's Eve could be attributed to the coronavirus, particularly the announcement of newly confirmed cases.

"It was a reality check for people, I noticed a shift," he said.

"Victorians have been through an enormous amount since COVID started and none of the community want to go back into hard lockdown.

"Last night was one of the quietest New Year celebrations."

A crowd of more than 100 revellers at St Kilda Beach quickly dispersed when police arrived. Across the state 25 people were arrested for drug-related offences and 17 were arrested for being drunk in a public place. Two serious assaults ended with two people hospitalised.

Mr Nugent said the amount of illegal fireworks being let off around the city was consistent with previous years and didn't increase after the pandemic forced the cancellation of official displays.