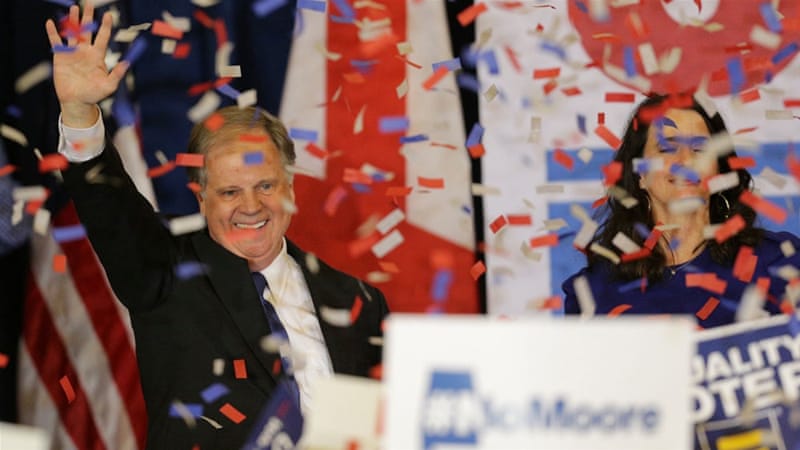 Two Democratic senators have been sworn into office in the United States, reducing the upper chamber’s already slim Republican majority.

Mike Pence, the US vice president, on Wednesday administered the oath of office to Doug Jones from Alabama and Tina Smith from Minnesota.

The ceremony in Washington, DC, came as the US Senate began its 2018 session with the minority Democrats picking up a surprise seat from Alabama – a longtime stronghold of their rivals – and shrinking the Republicans’ majority to a narrow 51-49.

Both Jones’ and Smith’s arrival to the Senate coincides with a campaign encouraging people to share their suppressed stories of sexual misconduct gaining strong momentum. The wave of allegations brought the removal of many men from positions of power in the US, including political figures.

The victory of Jones over Roy Moore in Alabama came after numerous women accused the 70-year-old Republican judge of sexual assault and advances when they were minors.

Jones won with 49.9 percent of a December 12 vote, the first time Alabama has elected a Democratic senator in 25 years.

Scandals on both sides

Controversy not only cost the Republicans a seat, but also prompted the resignation of a Democrat.

Franken, a former comedian, had served as one of Minnesota’s two senators since 2009. He was often touted as a possible candidate for the US presidential elections in 2020.

Numerous women came forward in recent months to accuse Franken of sexual improprieties. His resignation went into effect on Tuesday.

Still, Franken has not completely admitted to the accusations of which he is accused.

“Some of the allegations against me are not true. Others, I remember very differently,” Franken said during a Senate speech announcing his resignation last month.

Smith now plans to run in a November special election in hopes to complete Franken’s term, set to expire in 2020.

“I shouldn’t be underestimated,” she said during a public statement in December.

Both new senators swore to defend and uphold the US Constitution, the country’s founding document.

Democrats have performed strongly in a series of special elections for offices left vacant by appointees to the Trump administration, as well as elections at state level.

This has given the Democrats hopes of taking control of the Senate in the 2018 mid-term elections, after their loss in the 2016 presidential vote.

Their chances are founded on the unpopularity of US President Donald Trump.

The most recent polls from Gallup, the nation’s foremost polling agency, showed Trump’s approval rating at 39 percent among all US adults.

Former president Barack Obama’s approval rating hovered around 50 percent at the same point in his presidency, according to Gallup polls.

At Wednesday’s ceremony, Jones was flanked by former Vice President Joe Biden, who is campaigning for Democratic candidates in the upcoming elections.

Biden’s popularity has seen an increase since leaving office in 2017. It currently sits at 57 percent, according to a December 22 poll conducted by survey research firm SSRS.

The 75-year-old, who has taken to criticising Trump, is often asked if he plans to run for president in 2020. Biden has not said if he will run, but has also not ruled out another campaign.