President Trump has largely ignored the groups of protesters who have greeted his trip to the United Kingdom, even dismissing the demonstrations as "fake news."

But he was powerless to stop one sit-in outside 10 Downing Street Tuesday morning that could have resulted in a diplomatic cat-astrophe.

Larry the Cat, the "chief mouser" of Downing Street, who has been a resident of the most famous address in Britain since 2011, took on an altogether different “Beast” when he decided to relax under the president’s armored limo.

Larry could also be seen tentatively watching from the window ledge outside Downing Street when President Trump and his wife Melania posed with outgoing British Prime Minister Theresa May and her husband Philip.

Larry eventually left his purring place under the car, but it was not immediately clear if he decided to vacate on his own.

The tabby has become something of a celebrity in the U.K. since taking up his residence. His popularity has coined a parody Twitter account, which has more than 260,000 followers. 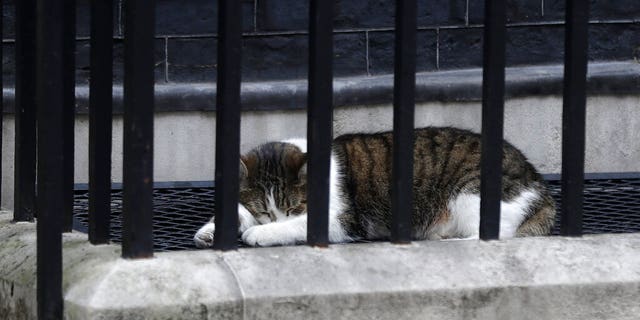 Larry, the 10 Downing Street cat and Chief Mouser to the Cabinet Office sleeps in the street before the arrival of President Donald Trump in central London, Tuesday, June 4, 2019.
(AP)

He can regularly be seen lazing outside May’s official residence, and had to be moved by police ahead of her resignation announcement last month.

Although he took on "The Beast" Tuesday, his arch-nemesis is actually Palmerston, "chief mouser" of the Foreign Office.

The duo has been seen brawling with one another in the street on more than one occasion.

To add insult to injury, Palmerston is reportedly a more successful mouser than Larry. A freedom of information request in 2017 found Palmerston had caught at least 27 rodents since taking up his position in 2016. Larry, however, seems purr-fectly content lounging in the sun.

The duo were both adopted from Battersea Dogs and Cats Home, Larry in 2011 and Palmerston in 2016, according to the Evening Standard.