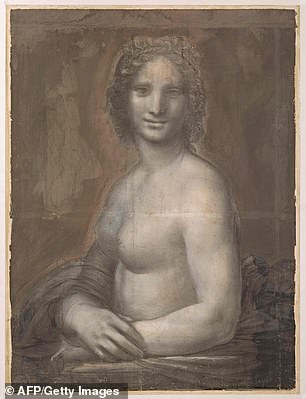 The Monna Vanna may be the work of Leonardo da Vinci, say experts after finding evidence it was created by a left-handed artist

A nude drawing with striking similarities to the Mona Lisa was created in Leonardo da Vinci’s studio and may be the work of the master himself, according to art experts.

Historians and scientists at the Louvre Museum in Paris, where the world’s biggest collection of Leonardo’s work is held, have been examining the Monna Vanna for months.

The charcoal drawing of a semi-nude woman has long been attributed to the Renaissance painter’s studio.

But it may now have to be reclassified as the work of da Vinci himself after microscopic examinations found the Monna Vanna was drawn from the top left towards the bottom right, which points to a left-handed painter.

Leonardo, who died in France in 1519, is the most famous left-handed painter in history.

‘There is a very strong possibility that Leonardo did most of the drawing,’ Mathieu Deldicque, a curator at the Paris museum, said.

‘It is a work of very great quality done by a great artist,’ added Deldicque, who launched the investigation over several months by historians and scientists at the Centre for Research and Restoration of the Museums of France (C2RMF) laboratory under the Louvre.

‘It is almost certainly a preparatory work for an oil painting,’ Deldicque said, with the hands and body almost identical to the Mona Lisa, Leonardo’s masterpiece which hangs in the Louvre.

The large drawing has been held since 1862 in the huge collection of Renaissance art at the Conde Museum, once the home of one of France’s oldest noble families.

The drawing will be shown at a special exhibition at Chantilly later this year to mark the 500th anniversary of the death of the artistic genius, who was born in the Republic of Florence in 1452.

But he was thrown by ‘hatching on the top of the drawing near the head done by a right-handed person’. 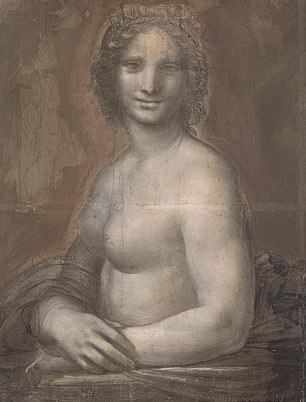 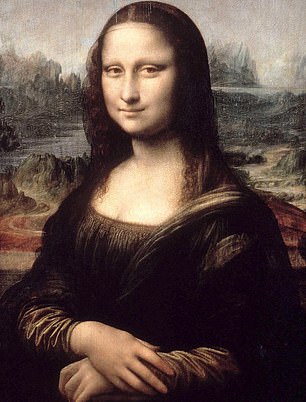 The charcoal drawing of a semi-nude woman bears a striking resemblance to da Vinci’s masterpiece the Mona Lisa. Both were created using his beloved ‘sfumato’ technique

Since then they had ‘discovered lots of new elements’, Deldicque said, most notably ‘left-handed charcoal marks pretty much everywhere’.

Tests had already revealed the drawing on paper, using Leonard’s beloved ‘sfumato’ technique, was not a mere copy of a lost original.

But Deldicque said that ‘we must remain prudent’ about definitively attributing the work to the great polymath.

‘We want to be serious and scientific about this,’ he told AFP. ‘The quality of the drawing, both to the naked eye and under imaging analysis’ shows it was the work of an exceptional hand.

But experts cannot be ‘absolutely certain (it was by Leonardo) and we may never be,’ he admitted.