This is the terrifying moment a racing driver barely escapes death when his truck leaps over an SUV coming towards him on a dirt track.

The footage, filmed by Kyle Douglas, captures the off-road truck as it speeds along a track at the Ojos Negros circuit in Baja California, Mexico.

But on the other side of the road, a black SUV approaches, staying close to the left as the pink and white monster truck draws nearer. 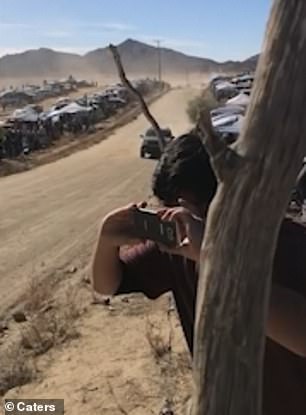 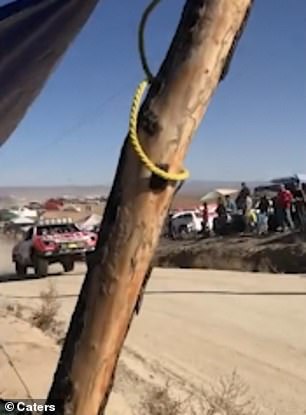 A black SUV and a racer truck speed towards each other at the Ojos Negros circuit in Baja California, Mexico

Moments later, the off-road vehicle hurtles through the air as it heads perilously close to the SUV.

It even appears to clip the top of the car with its two right wheels as it passes the car in front of a crowd of onlookers.

A scattering of debris then flies into the sky from between the two vehicles. 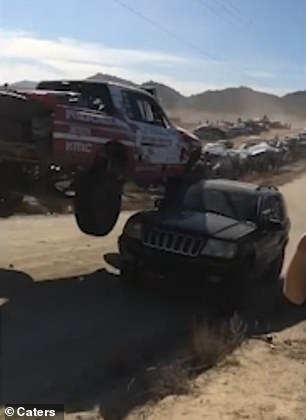 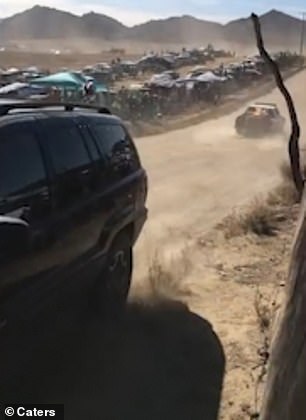 The racer truck then continues down the road at high speed as the SUV begins to slow, appearing to come to a stop as another brightly-coloured vehicle passes.

Mr Douglas said: ‘Several hundred people could have been severely wounded and or dead in the event that the race truck collided with the jeep, instead it merely scraped it.

‘The jeep was headed the wrong way on the racecourse, when the danger was clear people began to back up and scatter.

‘In the aftermath the locals threw beers and objects and shouted angrily.’

It is unclear why the SUV was travelling in the wrong direction.