The family of a triathlete cyclist are outraged after the drink-driver who killed him escaped prosecution due to a police blunder.

An inquest heard how Alan Hall, 57, was believed to be more than double the drink-drive limit when he crashed head-on into superfit Sze-Ming Cheung, 44, who was training for an Ironman race.

Police who smelled alcohol in his grey Nissan Navara truck arrested him on suspicion of drink-driving and causing death by dangerous driving in Swannington, Norfolk. 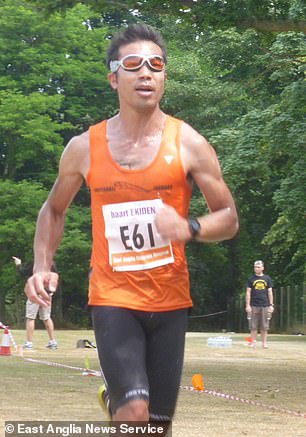 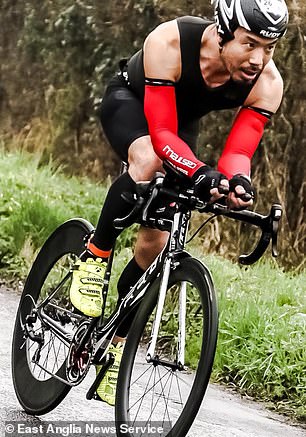 Ironman triathlete Sze-Ming Cheung, 44, was killed when drink-driver Alan Hall ploughed into him in Swannington, Norfolk but a police error meant Mr Hall, 57, could never be prosecuted

But an error by Norfolk police meant that Mr Hall was not summonsed for drink-driving within the statutory six month time limit even though he had failed a breath test and blood test.

No action was taken against him for dangerous driving after it emerged he had hit Mr Cheung while swerving to avoid a van which was overtaking the cyclist on a bend and on the wrong side of the road.

The van driver was never identified, although a suspect was later questioned but was not arrested due to insufficient evidence after he denied being involved.

Norfolk coroner Jacqueline Lake recorded a conclusion that Mr Cheung who was also a keen runner and swimmer had died as a result of a road traffic accident at Norfolk Coroner’s Court in Norwich.

Mr Cheung’s family expressed dismay after the inquest, saying it was ‘beyond belief’ that Mr Hall had not been charged with drink-driving after the accident on June 7, 2018.

His mother Wai-Hing and brothers Jack and Dick Cheung, who attended the hearing, said in a statement: ‘We are all very angry, disgusted and disappointed with the inquest’s final verdict of Sze-Ming’s death two years on.

‘The injustice of the outcome is still very raw and difficult to comprehend and always will be as we have to live with it.

‘How the driver cannot be punished for drink driving when he was clearly over the limit is beyond belief?’

The family, who run the Chung Hing Chinese restaurant in Hellesdon, Norfolk, described the whole case as being a ‘shambles’ and said Norfolk Constabulary ‘handled it very poorly’.

Their statement added: ‘It’s not given us any closure at all and is very distressing every second of every minute of every hour of the day. 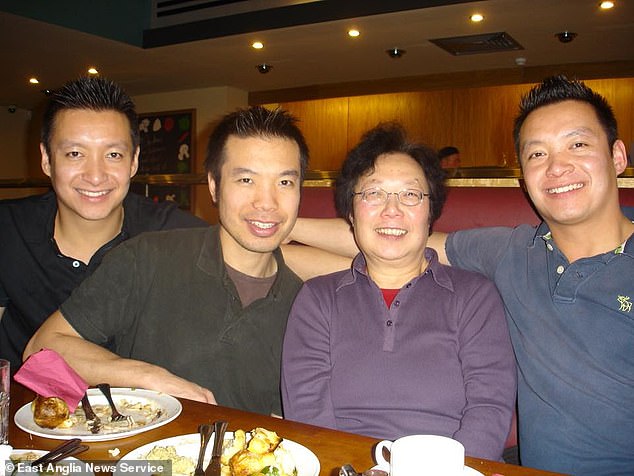 Sze-Ming, second left, with mother Wai-Hing (centre) and brothers Dick (far left) and Jack (right). The family were left outraged by the police blunder and have said pain will not go away

‘We will fight our way through our own lives everyday with hurtful emotions and it (the investigation) will always be open to us.

‘Sze-Ming will never be forgotten and the pain and heartache will never go away for the rest of our lives’.

Dick Cheung added: ‘We have fought hard for justice, unfortunately we haven’t got it and those responsible will not be brought to the courts and they get to live their lives.

‘Sadly, Sze-Ming won’t, we are absolutely devastated and always will be.’

The inquest heard how Mr Cheung who ran a fish and chip shop next to his family’s takeaway had been training for an Ironman race in Italy on a bike he built himself when he was hit by Mr Hall.

The officer went to speak to Mr Hall who told him he had been driving up the hill when a van overtook Mr Cheung on his side of the road which ’caused him to swerve and somehow he collided with the cyclist’.

PC Barker said he noticed that Mr Hall was ‘very subdued’ and described a ‘smell of alcohol’ in his truck.

He said that Mr Hall was drinking from a peach bottle and told him that he had drunk alcohol at about 11.30am that day, around four hours before the crash. 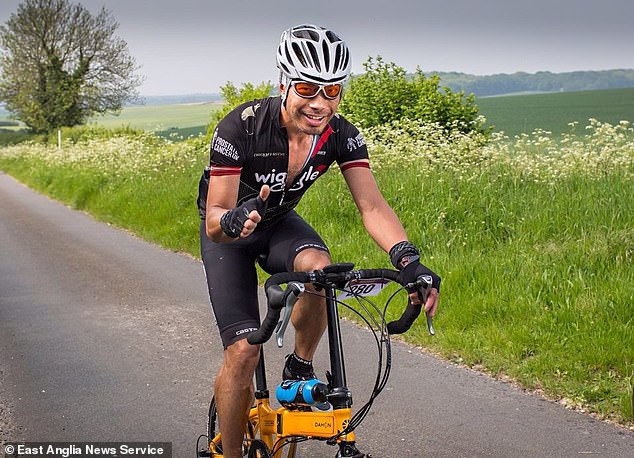 Mr Hall failed a breath test at the scene and a blood test three hours later found he was one and a half times the drink-drive limit, indicating he was more than double the limit at the time of the accident.

Norfolk Police forensic investigator Paul McKay said the unknown van driver had been the ‘catalyst’ of the crash by overtaking Mr Cheung on a bend ‘when it was unsafe’.

But he said that Mr Hall’s alcohol reading may have ‘resulted in him being less able to deal with the rapidly changing situation’.

Mr Hall told police in a statement the day after the crash that he had been driving to Easton College to pick up his daughter when he swerved to avoid ‘a van on my side of the road’.

Mr Hall said in his statement that he was ‘in shock’ and felt sorry for the family of the cyclist. He added: ‘If I could change it I would’.

The inquest heard that Mr Cheung had no chance of avoiding the collision.

Norfolk Police confirmed its investigation into the collision was completed in June 2019 without anyone being prosecuted,

Mr Cheung’s family challenged the decision under the Victims’ Right to Review scheme.

But the force announced last month that ‘no further action will be taken against either person interviewed in relation to the collision’. 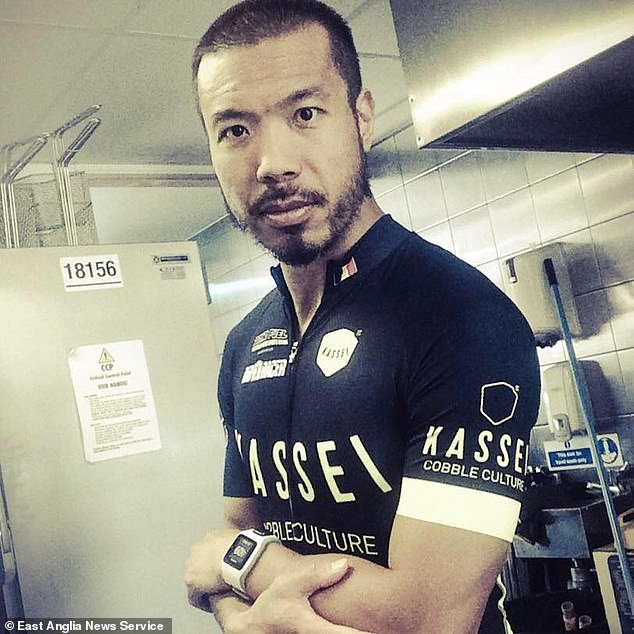 The spokesperson said: ‘In this case the officer failed to complete this and because the case is over the time limits, we cannot prosecute.’

A Norfolk Police statement added: ‘This is a tragic case in which a man lost his life and our thoughts remain with Mr Cheung’s family and friends at what we know continues to be a difficult time.

‘We acknowledge that elements of this investigation fell below the standards expected and the failure to prosecute a drink driver involved in the crash was unacceptable.

‘We take a firm stance on drink drive offences which is why it is all the more disappointing for an opportunity of justice to be missed.

‘We have met with Mr Cheung’s family to explain this and offer our apologies. The officers involved have been given management advice.

‘We understand this offers limited comfort to the family of Mr Cheung in their pursuit for justice.

‘However, while no action has been taken against people interviewed in this case, it remains open and should further information come to light, we would review this and respond accordingly.’