Speeding driver, 40, who was high on cocaine and using his mobile when he killed ‘sweet’ grandmother, 85, as she crossed road is jailed for five years

A speeding driver was high on a cocktail of drugs and on the phone when he killed a grandmother as she crossed the road.

Adrian Fasan, 40, was doing 45mph in a 30 mph zone and under the influence of coke and speed when he crashed into Catherine Akehurst- killing her instantly in September 2017.

The ‘sweet’ 85-year-old grandmother had stopped at the central island to check for oncoming traffic before crossing the road in Hove, East Sussex around 1pm.

However Fasan, who had consumed a cocktail of cocaine and amphetamine, failed to brake before he hit the grandmother in broad daylight. 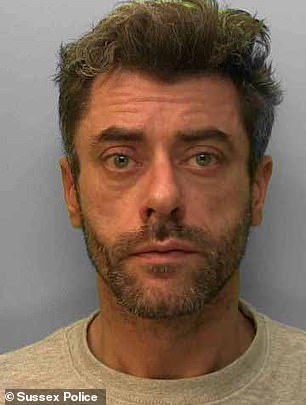 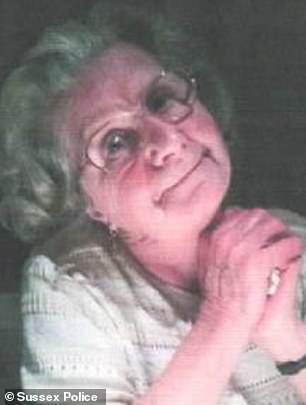 Adrian Fasan (left), 40, from Brighton in East Sussex, was doing 45mph in a 30 mph zone and under the influence of coke and speed when he crashed into Catherine Akehurst (right) in September 2017

The windscreen of his Toyota Celica was smashed in and the bonnet crumpled by the impact.

Police investigators later discovered the ABS system was not working and a warning sign was flashing on the dashboard.

Moments before Ms Akehurst’s death, Fasan was also caught overtaking and undertaking other vehicles and swerving to avoid the traffic.

CCTV from businesses and a bus caught him having to swerve to avoid a collision with another car when it pulled out.

He also ignored the flashing ‘slow down’ sign on the road while phone records showed he had been on a call that lasted for 18 minutes,

A tribute from Ms Akehurst’s family read: ‘Catherine was a well-loved mother and grandmother with a very dry sense of humour, and we will cherish our wonderful memories of her.

‘She was a fiercely independent, sweet and capable 85-year-old woman who regularly crossed the road outside her house to catch the bus. 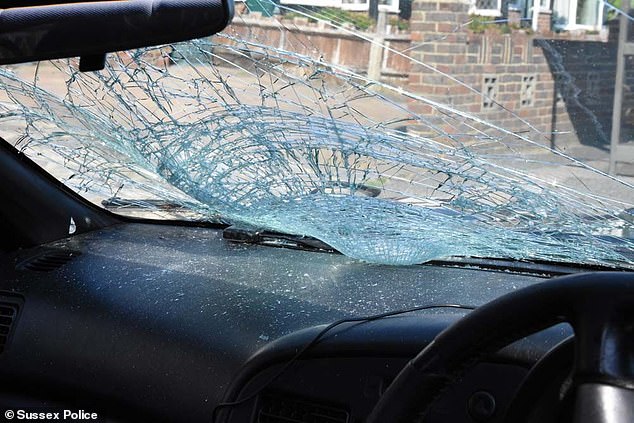 Following the crash, Fasan was jailed for five years and banned from the roads for nine years at Lewes Crown Court. Pictured: Fasan’s windscreen after the crash

‘We would like to deeply thank all the emergency services involved and the members of the public who tried to help and comfort Catherine at the scene.’

Fasan of Brighton in East Sussex, admitted to careless driving but denied the more serious charge of dangerous driving.

But on the day of his trial Fasan admitted dangerous.

He was jailed for five years and banned from the roads for nine years at Lewes Crown Court yesterday.

PC Chris Welsh from the Serious Collision Investigation Unit said: ‘This collision was another tragic case where a life has been needlessly lost.

‘Mr Fasan’s attitude that day to get behind the wheel of a car having recently consumed the type and amount of drugs he had, was nothing short of dangerous.

‘Combined with his manner of driving, mobile phone use and apparent lack of concentration, he has failed to react in any way to Catherine crossing the road in front of him.

‘This case is another stark reminder of the dangers of exceeding the speed limits, using a mobile phone while driving and driving while under the influence of drink or drugs.

‘His actions, just one person’s decision, has had a huge impact on so many people’s lives.

‘I would like to thank all those who stopped to help at the scene and those who came forward as witnesses which were invaluable to our investigation.’

Ms Akehurst’s family are now petitioning for a crossing to be built along the road close to where she was killed.

The family said: ‘Her local neighbours and councillors are currently petitioning for a crossing to be built along Old Shoreham Road near where Catherine was killed.

‘We regularly see motorists exceed the speed limit along this stretch of road and we would like to encourage everyone to sign this petition as it will enable pedestrians, young and old, to cross safely.’