Meghan is expected to give birth very soon

Police are cracking down on drone flights near Harry and Meghan’s new home amid claims the Duchess of Sussex is due to give birth any day now.

Meghan, 37, and Harry, 34, are on standby while expecting the arrival of baby Sussex, but the Prince still plans to attend the London Marathon in order to hand out medals and support the participants.

Signs warning drone pilots that it is illegal to fly in the area have been erected on the boundary of the northern reaches of Windsor’s Home Park, which surrounds Frogmore Cottage.

It comes after a reckless drone pilot risked disaster by trying to take aerial images of Prince Harry and Meghan Markle’s new home in the middle of Heathrow’s busy flight path earlier this month.

The Duchess has been staying close to Frogmore Cottage, Windsor, with mother Doria Ragland at her side for more than a week.

A royal source told the Sun: ‘It won’t be long now. Meghan’s really excited. Of course she’s nervous like any first-time mum but she and Harry can’t wait. 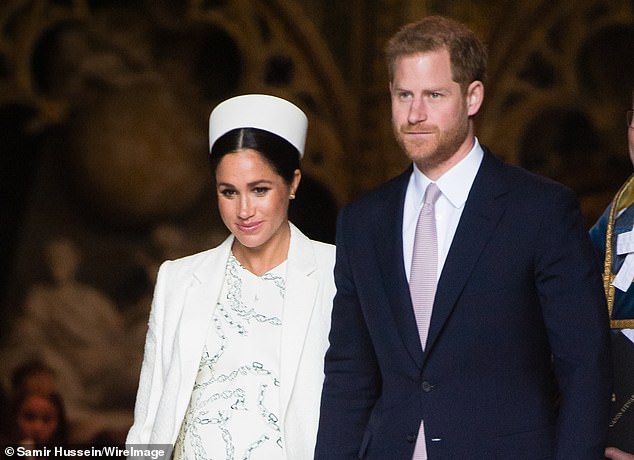 A source claimed that Meghan is taking medical advice on a daily basis, and she wants to stay at home for as long as possible – but if something were to go wrong, she would be taken to hospital

‘She’s been preparing for the birth – she wants it to be as natural as possible – and so has been practising hypnobirthing and breathing techniques with Harry.

‘It’s been a huge support having her mum by her side and now she’s just getting as much rest as she can.’

Surrey’s Frimley Park Hospital, which is just half an hour from the couple’s Windsor home, has been put on standby.

The royal source claimed that Meghan is taking medical advice on a daily basis, and she wants to stay at home for as long as possible – but if something were to go wrong, she would be taken to hospital.

Alan Farthing and Guy Thorpe-Beeston, who oversaw the arrival of Prince George, are involved in the planning of baby Sussex’s birth, the source said. 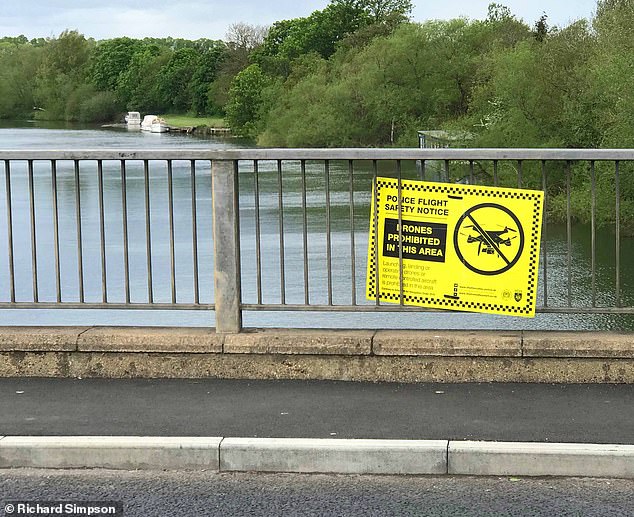 Harry and Meghan recently set up an Instagram account, and it is believed the first picture of their baby will be posted on the social media site.

The signs warning that drones are prohibited were erected by Thames Valley Police on main road through Windsor Home Park.

On April 6, a drone pilot risked disaster by trying to take aerial photographs of Prince Harry and Meghan Markle’s new home, Frogmore Cottage, in the middle of the Heathrow passenger jet flightpath.

A photographer walking in Windsor Home Park that day took photos of the quad-copter soaring hundreds of meters into the air right in the centre of one of the busiest passenger aircraft flightpaths in the world.

The drone flew south to north along the line of The Long Walk – the route Harry and Meghan took in a carriage on their wedding day last year – and hovered over Windsor Castle. 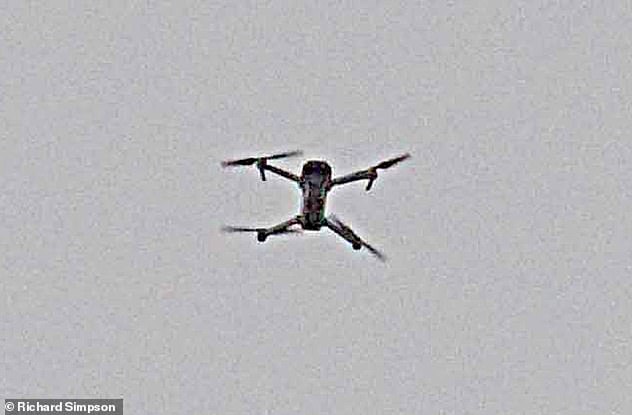 A photographer walking in Windsor Great Park took shots of the quad-copter soaring hundreds of yards into the air. It is seen here in a zoomed-in image

It then returned south down the The Long Walk and swerved east and headed directly to Frogmore Cottage before returning south where it came from and disappearing.

The drone flight took place between 5.02pm and 5.08pm on Saturday April 6.

The photographer, who snapped the drone on a long lens with a professional high-megapixel camera, estimated the height of the drone to be more than 300 meters (more than 980ft). The maximum height a drone can be legally flown, even in an uncontrolled airspace, is 121 meters (300 feet).

The route taken by the drone was within very tightly controlled airspace.

It was in what is called the London Central Zone – tightly controlled airspace over the capital city – as well as being right in the middle of the Heathrow arrivals and departures flightpath. 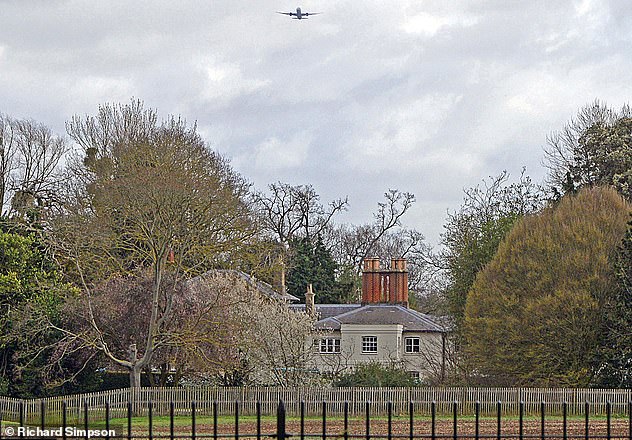 The flight took place right in the centre of Heathrow’s flight path. Pictured is Frogmore Cottage with a passenger jet passing ahead

It as also within close proximity of Windsor Castle, which is a banned zone for drone flights. It is also illegal to fly zones within the confines of Windsor Great Park.

On that day, flights were coming in to Heathrow directly over Frogmore Cottage every two minutes for an eight hour period, flying as low as 1,500 feet, meaning the drone would have been only a few hundred feet from a passenger aircraft coming in to land at one of the world’s busiest airports.

Article 95 of the Air Navigation Order 2006 prohibits drone pilots from flying unmanned aircraft in certain areas unless they have permission from the Civil Aviation Authority.

In recent days, the Royal helicopter has also been seen taking off from the Frogmore Estate – something which might also be endangered by drone activity.

Meghan is currently resident at Frogmore Cottage in preparation for the imminent birth of baby Sussex.

The news comes amid reports that the purported rift between the Sussexes and the Cambridges has been healed.

Another royal insider told the Mail on Sunday that the supposed long-running feud between Prince William and Prince Harry was ended weeks ago.

Since last year there have been reports of a spat between the brothers, and the tensions were said to have been sparked by William questioning whether Harry was being hasty in marrying Meghan last May, less than two years after they met.

Whatever the cause, sources said the rift was healed up to ten weeks ago – at about the same time the Royal households were reorganised.

Harry is setting up a new office at Buckingham Palace, while William remains at Kensington Palace.

Last week Harry sat with the Duchess of Cambridge at Westminster Abbey after making a surprise appearance at an Anzac Day service to honour the sacrifices of Australian and New Zealand forces.

The Duke’s name was not printed on the order of service because of the possibly imminent birth.