The drugs industry is facing a crackdown for encouraging doctors to over-prescribe medicines – many of which may not actually be helping patients.

Health Secretary Matt Hancock has ordered a review into our reliance on prescription drugs, warning that a ‘small army of people’ from pharmaceutical firms was pushing their use.

He said it was up to the NHS to resist that pressure.

In an interview with the Mail, Mr Hancock revealed that 20 prescriptions were written per head of population each year – a rise of a third in just a decade. 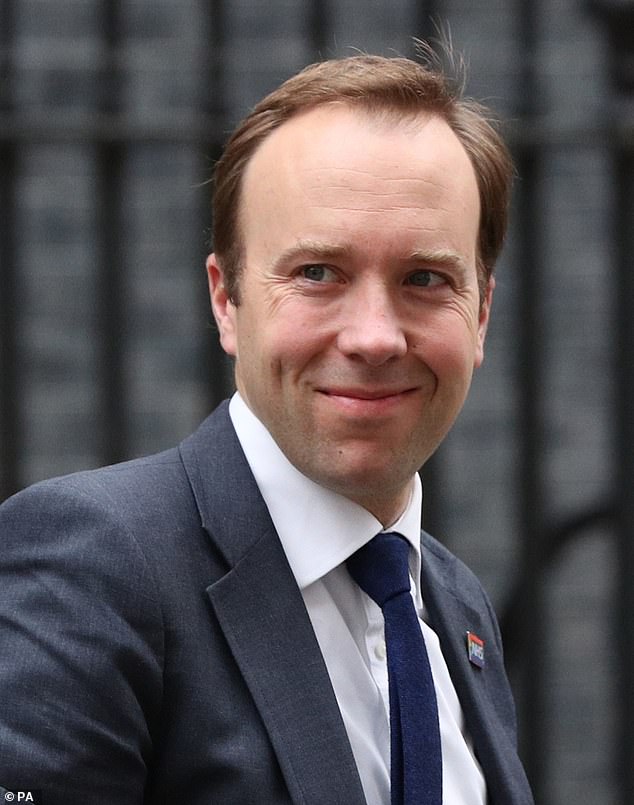 He said half of over-75s were taking five or more prescriptions at a time.

Antidepressants, heart failure drugs, high blood pressure pills and diabetes medication are among the most used.

Announcing his review, the Health Secretary said he wanted GPs to advise more patients to join walking groups, take part in coffee mornings or do some gardening or volunteering.

Such ‘social prescribing’ has been shown to be effective against dementia, heart disease, type 2 diabetes, depression and loneliness.

Mr Hancock said: ‘Because drugs are made by companies who understandably want to sell them, there is a small army of people pushing the use of drugs.

‘There isn’t a countervailing army of people saying you don’t need the drugs, you can change behaviour instead.

‘It’s the role of the NHS to lean against the pressure from drug companies to always use more drugs.

‘I’ve been concerned by the scale of the rise over the past decade, and we’ve got to query whether that’s right.’ 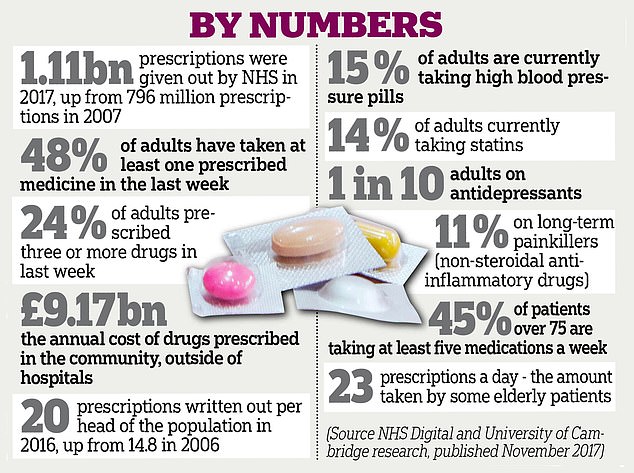 He has instructed NHS England’s chief pharmaceutical officer Dr Keith Ridge to carry out the review.

It will look at reducing polypharmacy – putting patients on multiple drugs, including ones used solely to combat the side-effects of others.

GPs will also be urged to call patients in for medication reviews to see whether there are any pills they can stop taking.

The Health Secretary also wants to doctors to say ‘No’ to patients who demand any unnecessary medication.

Many GPs say they are pressured by patients to prescribe a drug, even when they don’t think it will do any good.

He said: I’ve sat next to GPs who are telling me about the challenge of a patient who says, “I want a prescription”.

‘I want to empower GPs to use social prescribing and advice – nutritional advice, smoking cessation advice or advice on how much people drink – when that’s clinically appropriate.

‘A really good example is type 2 diabetes, where nutritional advice or support to lose weight can get you off diabetes drugs and help tackle the underlying problem, rather than simply manage the condition.’ 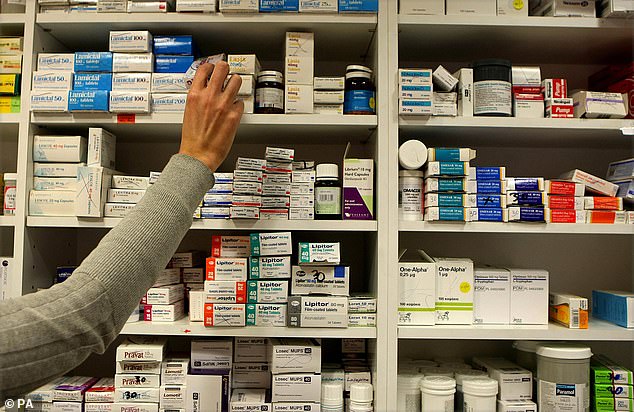 The drugs industry is now facing a crackdown for encouraging doctors to over-prescribe medicines. (Stock photo)

He praised Tom Watson, the deputy leader of the Labour Party, who reversed his type 2 diabetes with diet and exercise alone.

A record 1.1billion prescriptions were written in 2017, up nearly 40 per cent in ten years.

Ten per cent of adults are on antidepressants, and 14 per cent are on statins to lower their cholesterol level.

Mr Hancock said: ‘There are significant concerns amongst clinicians and medical leaders about the risk of over-prescriptions in Britain.

‘Over ten years since 2006 the average number of prescriptions per person has gone from 15 to 20 – a rise of about a third in a time when people have got healthier.

‘Part of that is the development of drugs which improved people’s health, and that’s a good thing. But there’s a concern about over-prescription.

‘There’s a concern that taking too many drugs at once can be a problem, especially if they interact with each other and especially if the people prescribing them are trying to treat individual problems as opposed to the person as a whole.’

In 2016, six experts – including Sir Richard Thompson, former doctor to the Queen – said patients were routinely given medicines unnecessarily, and accused firms of developing profitable drugs rather than ones likely to help patients.