Britain returns to work today… with a blast of icy weather.

But there are signs of brighter things to come with spring flowers bringing an early splash of colour in parts of the country.

Conditions have been so springlike that daffodils were in full bloom by the roadside in Somerton, Somerset, yesterday.

Their arrival comes thanks to the balmy New Year weather which is now being overtaken by bitterly cold conditions. 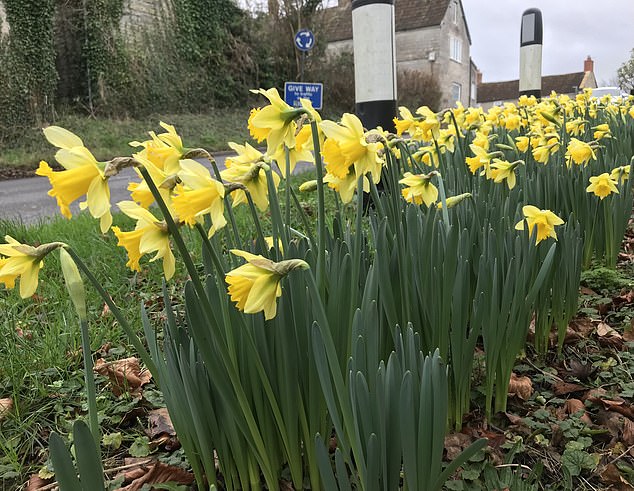 Sub-zero overnight temperatures and wintry showers are expected to dominate for most of the week. A cold weather alert is in place for northern England until Thursday lunchtime, with rain, hill snow and ice set to cross the country.

Temperatures in the North could reach -5C (23F) in the coldest spots tomorrow night and -4C (25F) in the South.

In northern Scotland there is a more serious weather warning for snow and ice today and tomorrow.

In the Highlands winds reaching 60mph and up to 6in (15cm) of snow could cause blizzard conditions. It is a world away from the record-breaking temperatures of around 16C (60.8F) seen in some areas around the New Year.

By this morning the ice and cold will turn the weather positively wintry again. Met Office chief meteorologist Neil Armstrong said the drop in temperatures would spread south from northern England today. He added: ‘This change is being brought on by a cold northerly flow, which brings the risk of some wintry showers in northern England, especially over high ground.

‘Minimum temperatures over the next few days are expected to drop below freezing, heightening the risk of some ice.’

Forecasters expect tomorrow night to be the coldest, with a frost across much of the country and temperatures dropping to -2C (28F) in the North East.

Southern England is also likely to see sub-zero temperatures before rain, sleet and some hill snow sweeps across the country on Thursday.

The UK Health Security Agency urged people to check on the vulnerable in the coming days, including the elderly and those with serious illnesses.