WikiLeaks founder Julian Assange has strained the patience of his hosts since taking up the offer of asylum in 2012. 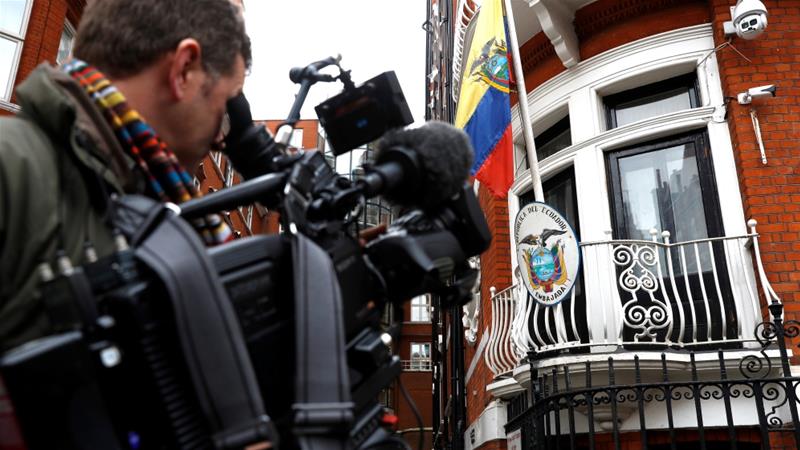 Ecuador’s President Lenin Moreno has described WikiLeaks founder Julian Assange as an “inherited problem” that has created “more than a nuisance” for his government.

Earlier this month, Ecuador announced it had granted citizenship to Assange, in an unsuccessful attempt to provide him with diplomatic immunity and usher him out of its London embassy without the threat of arrest by Britain.

“We hope to have a positive result in the short term,” he said in an interview with television networks on Monday.

Moreno said his country was continuing to seek mediation involving “important people,” without specifying whom he meant.

Assange took refuge in the Ecuadorian embassy in 2012 to avoid being extradited to Sweden for alleged sex crimes. The allegations came after WikiLeaks published, in 2010, a series of leaks that included the ‘Afghanistan War Logs’, ‘the Iraq War Logs’ and ‘CableGate’.

Assange has denied the allegations levelled against him and maintain they are politically motivated. He has remained in the embassy building ever since.

Following the leaks, the US government launched a criminal investigation into WikiLeaks and asked allied governments for assistance.

Sweden later shelved its investigation, but Assange faces arrest by British authorities for fleeing justice in the Swedish case.

He fears British authorities will then allow his extradition to the United States where he is wanted for publication by WikiLeaks of classified information in 2010.

The WikiLeaks founder has strained the patience of his hosts since taking up the offer of asylum made by then-president Rafael Correa in 2012.

He was publicly reprimanded for publishing hacked emails from the campaign team of Democrat Hillary Clinton in the 2016 US election.

More recently, he drew the ire of Correa’s successor, President Moreno, when he used Twitter to send messages of support for Catalonia’s independence drive.

Moreno was forced to respond to complaints from the Spanish government.

Commenting on the move to designate Assange a diplomat, Moreno said: “This would have been a good result, unfortunately, things did not turn out as the foreign ministry planned and so the problem still exists.”

Foreign Minister Maria Fernanda Espinosa has confirmed that Ecuador will maintain the asylum granted to Assange by the government of former president Rafael Correa.