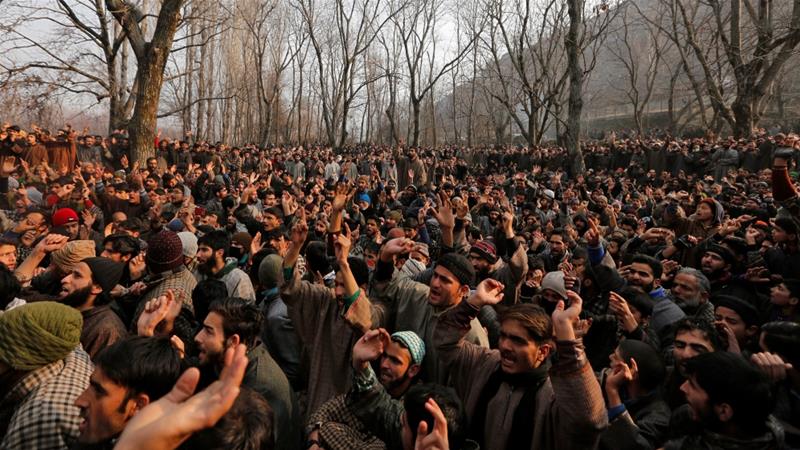 The fighting at the Lethpora-based camp, in southern Kashmir, left five Indian soldiers and three fighters dead, according to officials.

The attack began in the early hours of Sunday when three rebels stormed the vast base, located next to a police commando training centre.

Having taken the camps’ guards by surprise, the attackers forced their way into the premises and took position inside the compound’s buildings.

An intense gun battle ensued, as hundreds of police, army and paramilitary soldiers rushed to the scene.

Officials said one of the gunmen was a foreigner, while the other two were local residents from nearby villages, making them the first Kashmiris to carry out a “fidayeen” attack in seven years.

Those kind of assaults are typically suicide raids against official Indian installations, such as army and paramilitary camps. Heavily armed, the fighters usually engage in long stand-offs with the security forces until being killed.

Most of the “fidayeen” attacks have been carried out by foreigners affiliated with two Pakistan-based outfits – Lashkar-e-Taiba and Jaish-e-Mohammad, which also claimed the raid at the Lethpora paramilitary base

Thousands of people participated in their funerals, which were followed by clashes with security forces.

Anti-India sentiment runs deep among Kashmir’s mostly Muslim population, and most support the rebels’ cause against Indian rule, despite a decades-long military crackdown against the armed rebellion.

The Indian government and its security apparatus have been frequently accused of violating human rights and carrying out extrajudicial killings.

Rebel groups have been fighting since 1989 for the Indian-administered portion to become independent or merge with Pakistan.

The strength of these rebel groups has deteriorated sharply in recent years, though they maintain the capability to mount spectacular and deadly attacks against Indian security forces.