The Tory leadership hopeful, who has come out for No Deal, says the Conservatives lost its reputation as the party of law and order in Britain because of years of cuts.

Ms McVey, who says she is standing as a ‘blue collar Conservative’, also admitted today that parents should be allowed to pull their children out of lessons about same sex relationships.

She is pledging to create a new ‘Police Covenant’ that would guarantee £3billion to inflation-proof pay rises like members of the Armed Forces – and also said that she would find another £4billion for education – all paid for by slashing foreign aid. 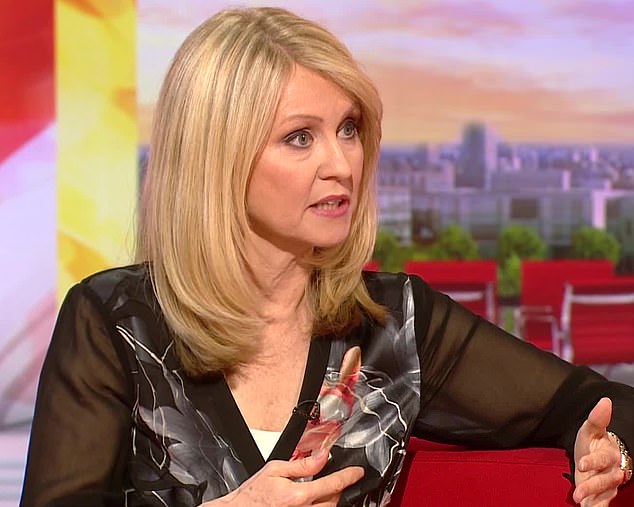 Esther McVey, 51, pictured today, is running in the Conservative Party leadership contest and has promised more money for police and schools

Writing in the Express today she said: ‘We have always prided ourselves on being the party for the police and of law and order. This bond has been broken by cuts to the police budget. 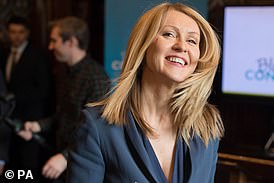 And the stylist in charge of her ‘sassy’ look is a former Gulf War veteran.

Mark Power, 51, has been popping round to the MP for Tatton every six weeks to primp up her blonde locks.

‘I’m not into big, bouncy blow-dries,’ he said this week.

He added: ‘I use straight lines in the cut to create a sexy, sassy look that will lie a lot softer, so she doesn’t need to blow-dry her hair every day.’

Power — who left the Army in 1992 after serving in the first Gulf War and then retrained as a hairstylist — counts the pop singer Sophie Ellis-Bextor among his former clients.

‘She hasn’t asked me to style her hair yet [for her wedding day],’ says Power.

‘I value what the police and our Armed Forces do and recognise the risks they take on our behalf. There can be no better way of showing this than by committing to paying and treating them properly’.

The former work and pensions minister said to fulfill her pledge she would spend £9billion over the next three-years – but would find the cash by reducing the £14billion overseas aid budget each year.

Ms McVey has said the UK must prepare to leave the European Union with no deal.

The former Work and Pensions Secretary, who is standing for the Tory leadership as a ‘blue collar Conservative’ platform.

Ms McVey has said: ‘The EU doesn’t want to move, the UK therefore has to be prepared to leave.  And as we know, with No Deal there is no backstop, so the best thing we can do is prepare to leave with No Deal.

The ‘proud northerner’ has said she said she is standing for ‘regular people who pay into the system, work hard, but want to know they get something back.’

She said the Brexit date of October 31 was ‘now fixed’ adding: ‘We won’t be asking for any more extensions that’s one of the uncertainties that individuals, businesses, and the country don’t want.’

But, she added, the ‘door is open’ if the EU wishes to come back to offer a renegotiation.

On the tortured issue of the Irish backstop, which sank three attempts by Mrs May to pass her Withdrawal Agreement, Ms McVey said an ‘invisible border’ would be possible to put in place even before October.

An invisible border refers to plans to  use number plate cameras and online pre-submission of customs forms to prevent customs checks at the one land border between the UK and the EU, in Northern Ireland.

She said: ‘We know the EU ain’t going to put up a border, we know Ireland won’t be putting up a border and we won’t putting up a border. It is clear to see the public’s view has hardened and it’s time to actively embrace leaving without a Withdrawal Agreement.’ 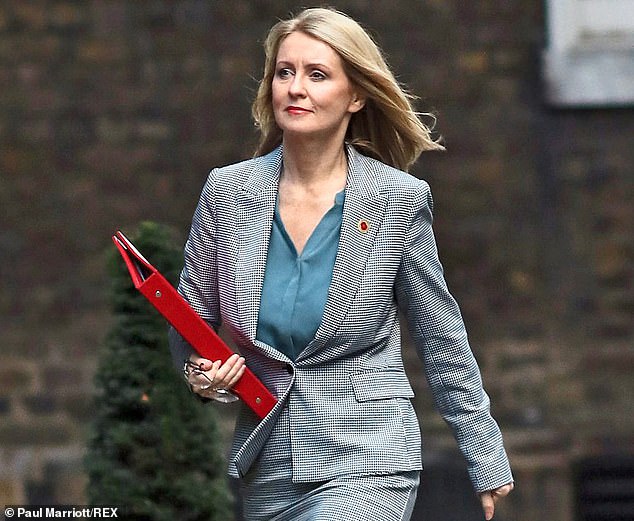 former work and pensions secretary Esther McVey, who is standing for the Tory leadership, said the country should be ready to leave the EU with no deal

Ms McVey, who resigned from Theresa May’s cabinet over  the Withdrawal Agreement, said: ‘It was always a poor deal and I preferred leaving without a deal. I therefore voted against it twice.’

She said the Withdrawal Agreement ‘ship has now sailed’ and should be ‘put out of its misery’, and that paying £39bn for a lengthy implementation period will not ‘cut the mustard’ with ‘an increasingly impatient public.’

She argued: ‘This country needs a genuinely bold, new approach. So we must now leave the EU on October 31 with a clean break.’