Shoppers have reacted furiously to a saucy Valentine’s Day advert for high end lingerie brand Agent Provocateur over claims it promotes the ‘objectification’ of women.

The huge advert, inside the city’s House of Fraser store, shows an underwear-clad model gazing at herself in the mirror in pink underwear.

Local councillors said they were ‘absolutely shocked and appalled’ by the picture, saying it is ‘pornographic imagery of women’ that is ‘not suitable for the high street’.

The poster was used to promote Agent Provocateur’s pop-up stores for Valentine’s Day at House of Fraser branches across the country, including one at Jolly’s in Bath.

Ahead of the opening of the pop-up shops, the lingerie brand’s creative director, Sarah Shotton, said: ‘This Valentine’s Day at Agent Provocateur we want people to remember to love themselves in their body, mind and self-confidence.’ 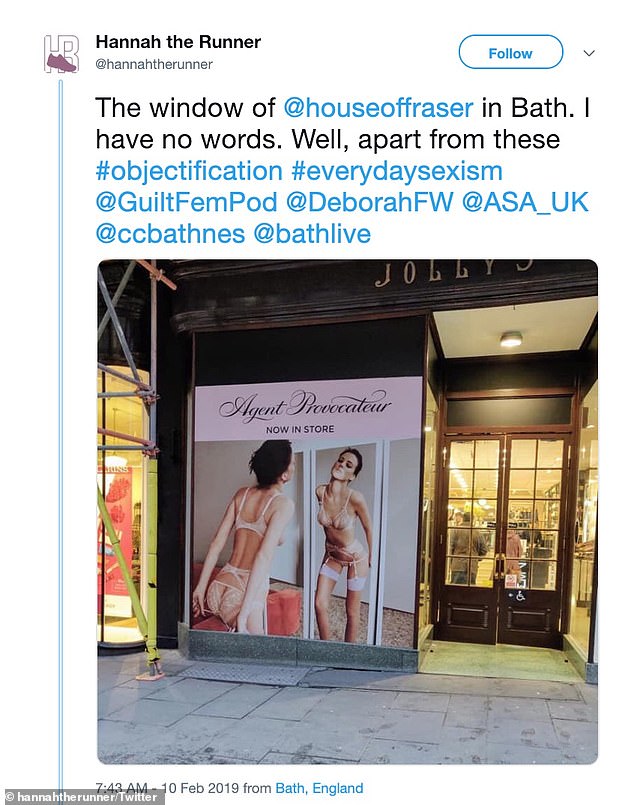 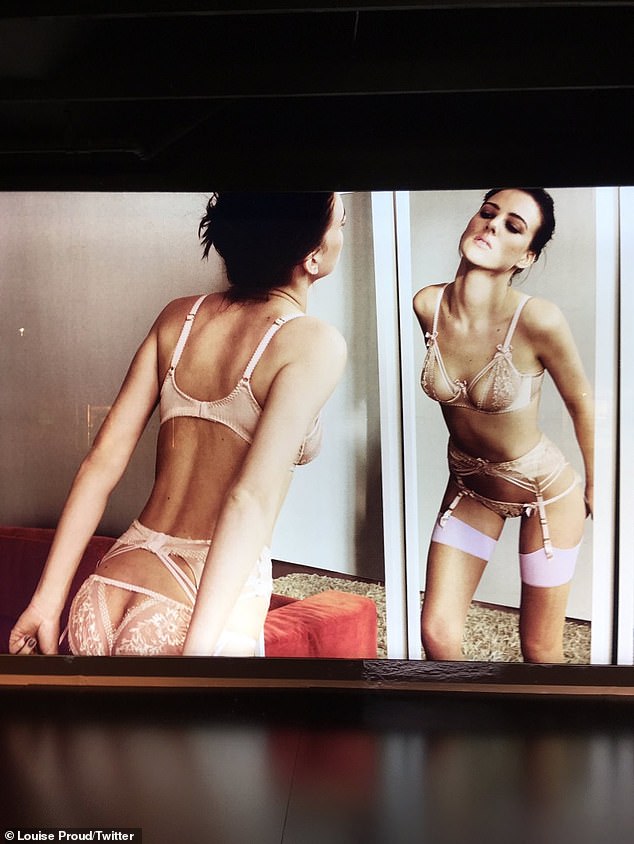 But the picture attracted dozens of complaints on Twitter, with critics saying the women is in a vulnerable position and the shot is taken from behind.

Hannah Lees, who manages a Bath-based running group, tweeted: ‘I have no words. Well, apart from these #objectification #everydaysexism.’

When other Twitter users suggested the pictures were harmless, she replied: ‘She’s not ‘owning her sexuality and her body’ She’s posing as directed by her employer.

‘She could be thinking about how empowered she is or wondering what’s on telly tonight. Bombarding girls with images like this increase eating disorders and other forms of self harm.

‘Exposing girls and boys to this perpetuates the patriarchal hegemonies which damage us all. Your daughter is negatively impacted by this image.’

Local councillor Victoria Atherstone complained about a similar pic in the Cheltenham branch of House of Fraser.

She tweeted: ‘Absolutely shocked and appalled by this @TheMissAP high street store photographic campaign displayed in @houseoffraser #Cheltenham shocking pornographic imagery of women #exploitation NOT SUITABLE for the high street – please take it down.’

But writing in support of the display, one Twitter user posted: ‘I see a sexy woman who’s feeling confident in gorgeous underwear. maybe she got herself the underwear because she loves how it makes her feel.

‘She looks great. Feminism is about choice. That’s her choice. No one should be shamed for their bodies or what they wear.’

Kenneth Durr said he was leaving the cinema with his 12-year-old daughter Hannah and son Alex, ten, when the trio saw the near-naked woman plastered on the side of the shop.

He said: ‘When my children saw it, my twelve-year-old daughter said, ‘that’s disgusting’ and my ten-year-old son was hiding his face.

‘The height of it too, it’s the size of a cinema screen. It’s enormous and provocative.’

Agent Provocateur is a British lingerie brand set up in 1994 by Joseph Corré – the son of designer Vivienne Westwood – and his then wife Serena Rees.

Its first shop was on London’s Broadwick Street, but it now has outlets in 13 countries.

In March 2017 it went into administration but was bought for around £25 million by Four Holdings, a company partly owned by Sports Direct founder Mike Ashley.

Supermodel Naomi Campbell has modelled for the company, along with Kate Moss, Helena Christensen, Daisy Lowe and Rosie Huntington-Whiteley.

Yesterday, a spokesman for the Advertising Standards Authority (ASA) said there had only been one official complaint about the images – but they weren’t in the watchdog’s remit.

He said their advertising rules didn’t extend to shop fittings or in-store material and that it likely fell to local councils. 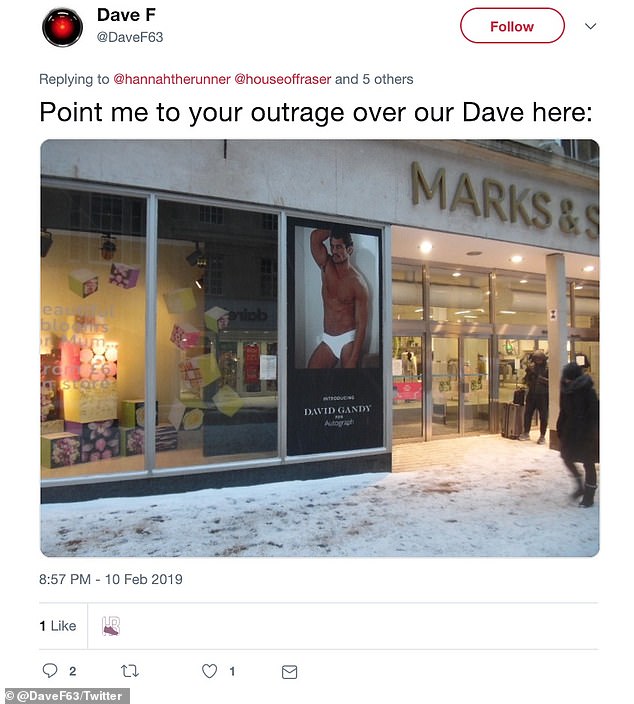