The former head of the UK Border Force has called the queuing carnage at Heathrow a ‘disaster’ and mounted pressure on ministers to get a grip on the crisis.

Tony Smith, who also served as Gold Commander for the London Olympics, said the Government should use technology to lighten the load on stretched officers.

Passengers arriving into Britain have been facing waits of up to seven hours while short-staffed officials process Covid paperwork, such as locator forms.

Yesterday a woman collapsed at the passport control desk after queuing for hours before being told she’d had to pay £1,750 for a hotel to quarantine.

Mr Smith urged international governments and airlines to ‘show leadership’ by getting together to hammer out a solution.

He suggested checking people’s documents before they board flights to avert clogging up the borders. 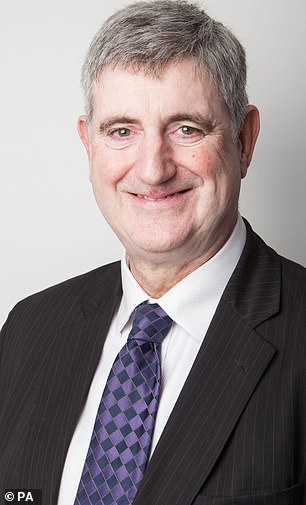 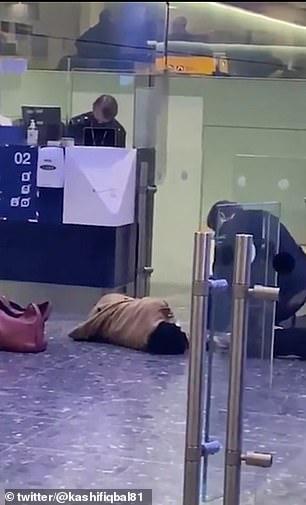 The former head of the UK Border Force Tony Smith (left) has called the queuing carnage at Heathrow a ‘disaster’ and mounted pressure on ministers to get a grip on the crisis. Yesterday a woman collapsed at the passport control desk (right) 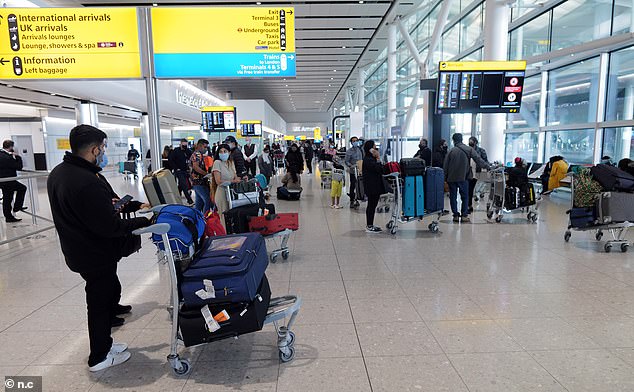 Passengers arriving into Britain have been facing waits of up to seven hours while short-staffed officials process Covid paperwork, such as locator forms (Heathrow pictured yesterday)

He told LBC: ‘This is a bit of a disaster. I managed the borders for all the Olympics, and those was the busiest we ever had in the UK, and at Heathrow – record numbers, high security.

‘And we did work with the airlines, we worked with the airports, with worked with our colleagues. The answer is: why don’t we check these things before people get onboard?

Such pre-flight passenger checks could be easily managed with apps, he suggested, as a way of easing the load on border force staff.

Giving a damning verdict of the current chaos, Mr Smith said: ‘All we’re doing is loading more and more pressure on to our hard-pressed officers at the border, asking them to do more and more things, and they’re getting beaten up every day because “we’re the ones who are the problem”.

‘We’re not the one’s who are the problem, the problem is we’re not opening up our mind and doing what we did after 9/11 and getting the right people to sort this out. We can show leadership and fix this and we’re not doing this – I’m very frustrated about this.’ 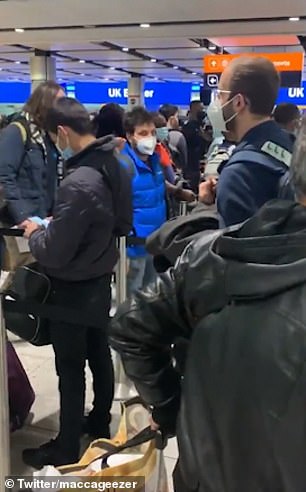 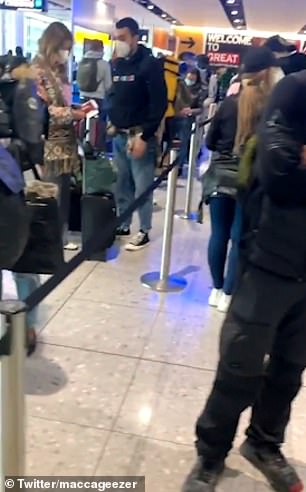 Passengers have expressed their anger over the long delays in the arrivals hall of Heathrow. Some passengers have had to wait for up to six hours to clear the border due to a shortage of Border Force staff

Yesterday the bosses of Heathrow Airport, British Airways and Jet2 lashed out at the ‘inhumane and completely avoidable’ queues.

They called on Home Secretary Priti Patel to step up border guard numbers as there are often ‘hardly any desks manned’ at passport control.

The wider use of electronic passport gates would ensure hassle-free holidays once foreign travel resumes under the Government’s ‘traffic light’ system, the experts said.

Sean Doyle, head of BA, said it had been working hard to ensure it can welcome customers safely but public confidence would be undermined ‘if we are not fully prepared at entry points into the UK’.

Heathrow Airport boss John Holland-Kaye said: ‘Recently, passengers arriving in this country have faced waiting times of over six hours with hardly any desks manned. This is inhumane and completely avoidable.

‘This is a wake-up call for ministers to make sure that when international travel restarts, the processes at the border are automated and every desk is manned.’

Although non-essential travel remains banned – and will remain so until May 17 at the earliest – but thousands are still entering the UK every day.

Chris Garton, head of operations at Heathrow, this week told MPs why the logjams were occurring.

He said: ‘What’s happened is a whole host of new checks – 100 per cent checking of everybody – has been introduced, and that obviously has put a tremendous burden on the officers who work at the border. The Home Office has not provided them with additional officers.’

A Home Office spokesperson said: ‘Queues and wait times will currently be longer, as it is vital that we undertake thorough checks at the border and due to the fact that some passengers have not completed the necessary requirements to enter the UK, such as purchasing Covid testing packages or booking their hotel quarantine in advance.’