Former FBI agent Robert Levinson ‘has died while held captive in Iran’ 13 years after vanishing while on secret CIA mission, family claim – but Trump says he doesn’t believe he is dead

The family of retired FBI agent Robert Levinson said Wednesday that U.S. government officials have concluded that he has died while in the custody of Iran.

Levinson disappeared in Iran’s Kish Island in 2007 while on an unauthorized CIA mission.

The family said in a statement posted on Twitter that it did not have information about how or when Levinson had died, but that it occurred before the recent coronavirus outbreak.

‘It is impossible to describe our pain,’ the family’s statement said. ‘Our family will spend the rest of our lives without the most amazing man, a new reality that is inconceivable to us.’

But when asked about the reports, President Trump insisted while reports aren’t ‘looking good’, he does not believe that the former agent has died. 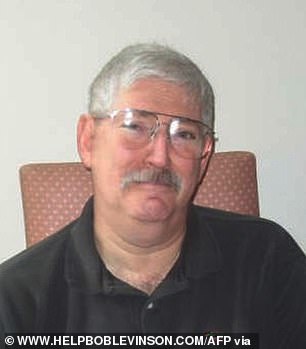 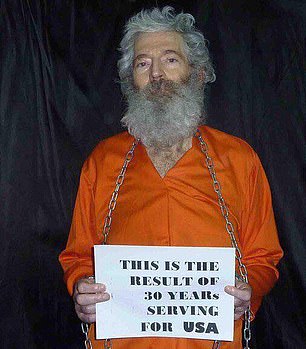 Levinson, pictured left before he vanished in March 2007, was on a secret CIA mission. The only photos and video of Levinson after his capture emerged in 2010 and 2011. He appeared gaunt and bearded with long hair, and was wearing an orange jumpsuit

He added: ‘It’s not looking great, but I won’t accept that he’s dead. They haven’t told us that he’s dead, but a lot of people are thinking that that’s the case.’

The family’s announcement of his death comes just weeks after a federal judge in Washington held Iran liable for his disappearance.

In November, the Trump administration offered a reward of up to $20 million for information about Levinson’s disappearance.

For years, U.S. officials would only say that Levinson, a meticulous FBI investigator credited with busting Russian and Italian mobsters, was working for a private firm on his trip.

In December 2013, the AP revealed Levinson in fact had been on a mission for CIA analysts who had no authority to run spy operations. 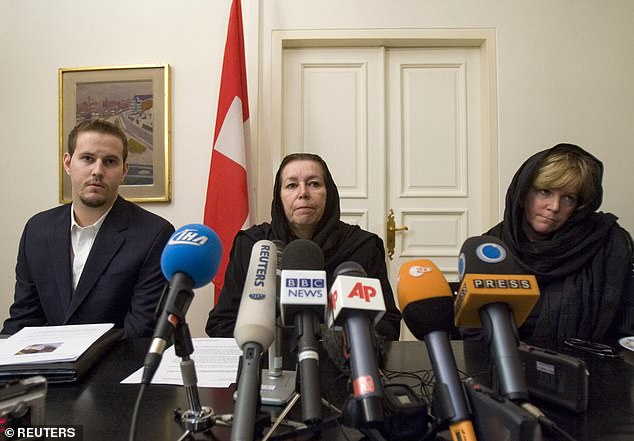 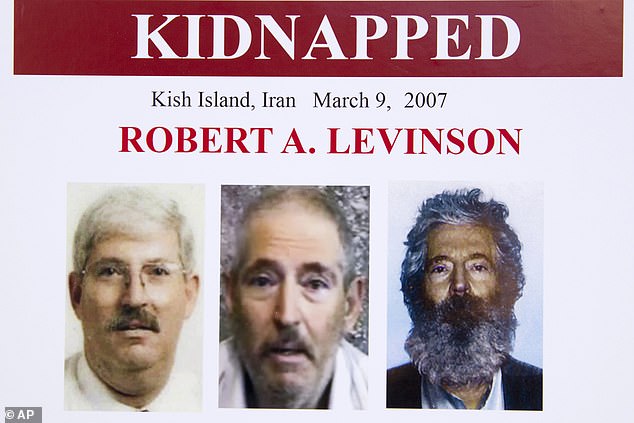 Levinson’s family had received a $2.5 million annuity from the CIA in order to stop a lawsuit revealing details of his work, while the agency forced out three veteran analysts and disciplined seven others.

Since his disappearance, the only photos and video of Levinson emerged in 2010 and 2011.

He appeared gaunt and bearded with long hair, and was wearing an orange jumpsuit similar to those worn by detainees at the U.S. prison at Guantanamo Bay.

In the 2011 video, he pleaded for health, saying: ‘I have been held here for three-and-a-half years. I am not in very good health. I am running very quickly out of diabetes medicine.’

Iranian officials have repeatedly denied knowledge of his disappearance or of his whereabouts. 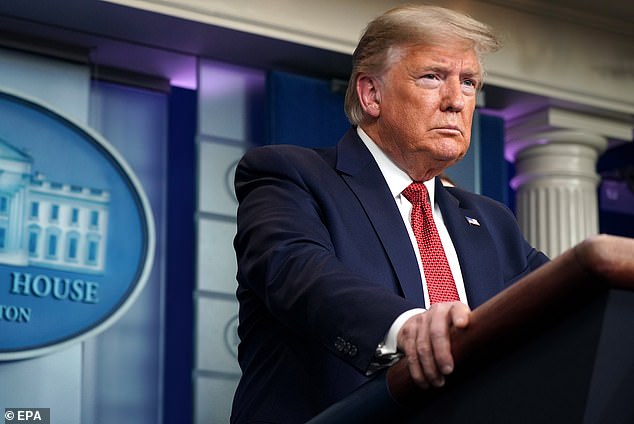 President Trump insisted while reports aren’t ‘looking good’, he does not believe that the former agent has died

In November, Tehran acknowledged for the first time that there was an ‘ongoing case’ in the Public Prosecution and Revolutionary Court related to Levinson, in a filing with the United Nations.

Iran released four US citizens of Iranian descent in 2016 when it concluded a nuclear deal with Obama but relations have sharply deteriorated under Trump, who withdrew from the accord and implemented sweeping sanctions.

Amid the coronavirus pandemic, Iran last week freed a US Navy veteran, Michael White, who had apparently come to Iran to see a woman he met online and was jailed for online criticism of the regime.

Family’s statement about the death of Robert Levinson

Today, with aching hearts, we are sharing devastating news about Robert Levinson, the head of our family.

We recently received information from U.S. officials that has led both them and us to conclude that our wonderful husband and father died while in Iranian custody. We don’t know when or how he died, only that it was prior to the COVID-19 pandemic.

It is impossible to describe our pain. Our family will spend the rest of our lives without the most amazing man we have ever known, a new reality that is inconceivable to us. His grandchildren will never meet him. They will only know him through the stories we tell them.

If not for the cruel, heartless actions of the Iranian regime, Robert Levinson would be alive and home with us today. It has been 13 years waiting for answers. Thirteen years since we last saw him or had any contact with him. How those responsible in Iran could do this to a human being, while repeatedly lying to the world all this time, is incomprehensible to us. They kidnapped a foreign citizen and denied him any basic human rights, and his blood is on their hands.

Bob Levinson should have spent his last moments surrounded by his family and all the love we feel for him. Instead, he died alone, in captivity thousands of miles away, in unbelievable suffering. His body has not yet been returned to us for a proper burial. We don’t even know when, or even if, his body would be returned to us. This is the very definition of cruelty.

Those who are responsible for what happened to Bob Levinson, including those in the U.S. government who for many years repeatedly left him behind, will ultimately receive justice for what they have done. We will spend the rest of our lives making sure of this, and the Iranian regime must know we will not be going away. We expect American officials, as well as officials around the world, to continue to press Iran to seek Bob’s return, and to ensure those Iranian officials involved are held accountable.

To you – the thousands of people who knew and loved Bob Levinson or who have supported our family during this terrible ordeal – we know you mourn with us. We can never thank you enough for your love, and for always being there in ways big and small. Because of COVID-19, we will be holding a memorial service in the future when it is safe to do so. We will let you know when and where.

We extend our deep appreciation to President Trump and the members of his Administration – National Security Advisor Robert C. O’Brien, Secretary of State Michael Pompeo, Acting Director of National Intelligence Richard Grenell, C.I.A. Director Gina Haspel, and FBI Director Christopher Wray – and their staff, who have done all they could to make our family whole again. We are so grateful for their efforts.

To the men and women of the FBI, active and retired, who did their best to bring our husband and father home – we know you, also, are mourning with us. Finding Bob Levinson was a personal mission for hundreds of agents and others who worked on this case over the years. We cannot even begin to describe our gratitude. He will always be one of the FBI’s own.

Bob Levinson was a truly remarkable individual – the best husband, father, brother, grandfather and friend anyone could ever ask for. He was an American hero – a true patriot, and his compassion and kindness knew no bounds. We will miss his warmth, humor, and wisdom, but most of all, we will miss the deep and unconditional love he had for each one of us. He will never be forgotten – we will make sure of it.