Labour MPs who lost their seats at the general election last month have lashed out at posh politicians after admitting they had been to the jobcentre to seek work.

Laura Smith and Karen Lee both spoke of their need to find a new source of income after they lost their Crew & Nantwich and Lincoln seats to the Tories on December 12.

They were among the swathe of Jeremy Corbyn’s MPs who lost their seats as he led the party to its worst election performance since 1935, giving Boris Johnson an 80-seat majority.

Mother-of two Ms Smith, 35, a former teacher, proudly defended her work ethic on Twitter, writing: ‘Someone just took a picture of me at the job centre.

‘Another person said ”are you the actual Laura?”

‘I’ve lost my job and unlike many in Parliament I don’t have a family fortune to fall back on. What do people expect you to do? Bizarre.’ 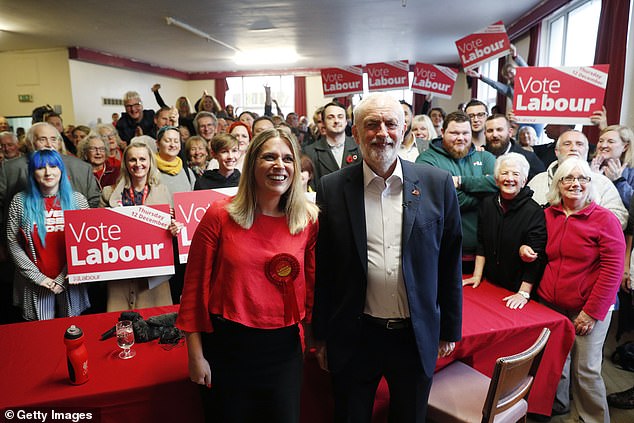 Mother-of two Ms Smith, 35, a former teacher, proudly defended her work ethic on Twitter. She was visited before the election by Jeremy Corbyn (pictured) but lost her seat by 8,000 votes

Her admission prompted a message of support from Ms Lee, 60, who added: ‘Me too, I was at the Jobcentre at 10am this morning.

‘Like you & millions of others I need a job too.

‘It’s weird too how local Tories are really nosey about what I’m going to do next…they seem awfully insecure.’

MPs are entitled to redundancy payments of double the statutory minimum based on their length of service.

Both MPs were elected for the first time in 2017 after taking seats off the Conservatives, before they swung back in December.

Ms Smith had been defending a majority of just 48, one of the smallest in the UK, and was replaced by Tory Kieran Mullan.

Ms Lee lost her Lincoln seat to Karl McCartney, who she had defeated two years earlier.