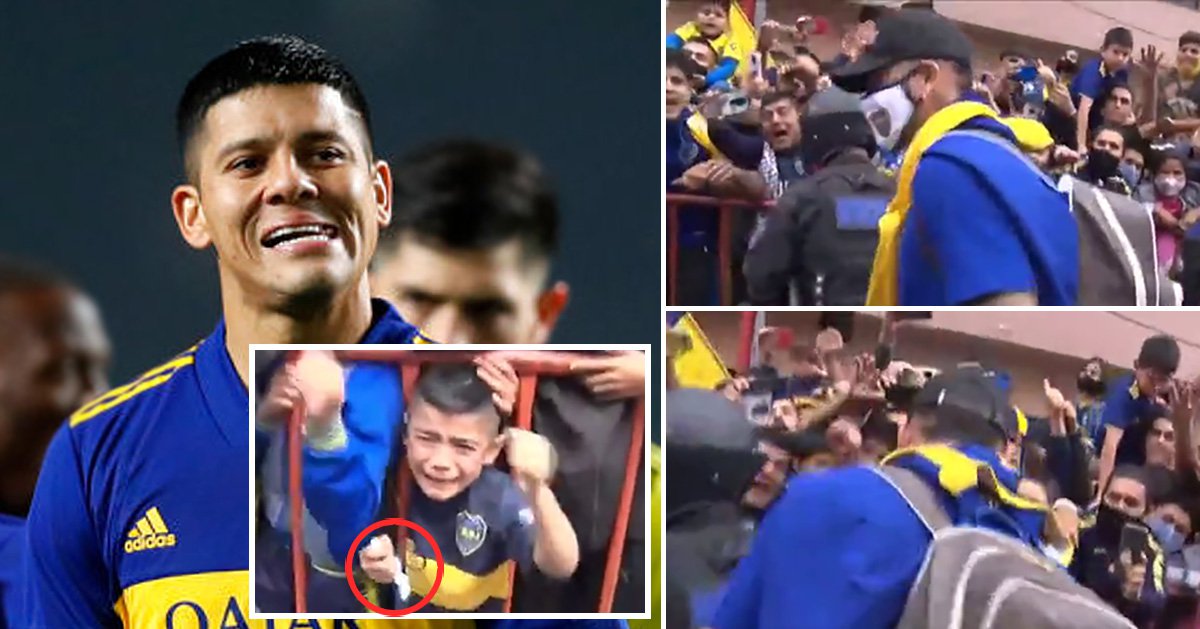 Former Manchester United defender Marcos Rojo has come under fire after whipping his face mask off and giving it to a child.

The footballer, 31, who joined Boca Juniors in February, was making his way to the team hotel ahead of tonight’s Copa Argentina match against Patronato.

Rows of adoring fans gathered to catch a glimpse of the stars and Rojo delighted one youngster with a low-five.

He then took off the mask he was wearing and gave it to the pint-sized supporter, drawing criticism for a breach of Covid-19 protocol.

The boy could be seen on television clutching the Boca-branded face mask close to his chest as he sobbed tears of joy behind barriers in the Argentinian city of Santiago del Estero.

They said: ‘Marcos Rojo passed on all his germs to that boy by gifting him his face mask, unless it’s a special one where your breath doesn’t get left on the fabric.

‘There are players that just don’t get it and need to wake up and realise they are role models. Terrible spectacle.’

Another fan tweeted: ‘Don’t you want to give him your toothbrush as well Marcos?’

But others defended the centre-back. One person wrote: ‘Professional football players live with a swab stuck up their nose. Stop being so nasty.’

Rojo, a dad-of-three, ended his near seven-year stay in England when he joined the Buenos Aires-based club.

The 60-cap Argentine defender was at the centre of a shocking tunnel fight in July after his side was dumped out of the Copa Libertadores on penalties against Atletico Mineiro.

He punched a security guard and wielded a fire extinguisher as players and staff raged over having two goals ruled out by VAR over the two legs.

Ex-Man United teammate Anders Herrera made light of the ugly incident on his Instagram by photoshopping the fire extinguisher into Rojo’s right hand in a snap showing him with his arm around the Argentinian defender after a Red Devils’ victory.