EXTINCTION Rebellion campaigners have blocked London's Tower Bridge with a van and a caravan during another day of chaos.

Eco-warriors lay on the road and mocked cops with a Benny Hill-style video as they boasted of giving officers "the run-around". 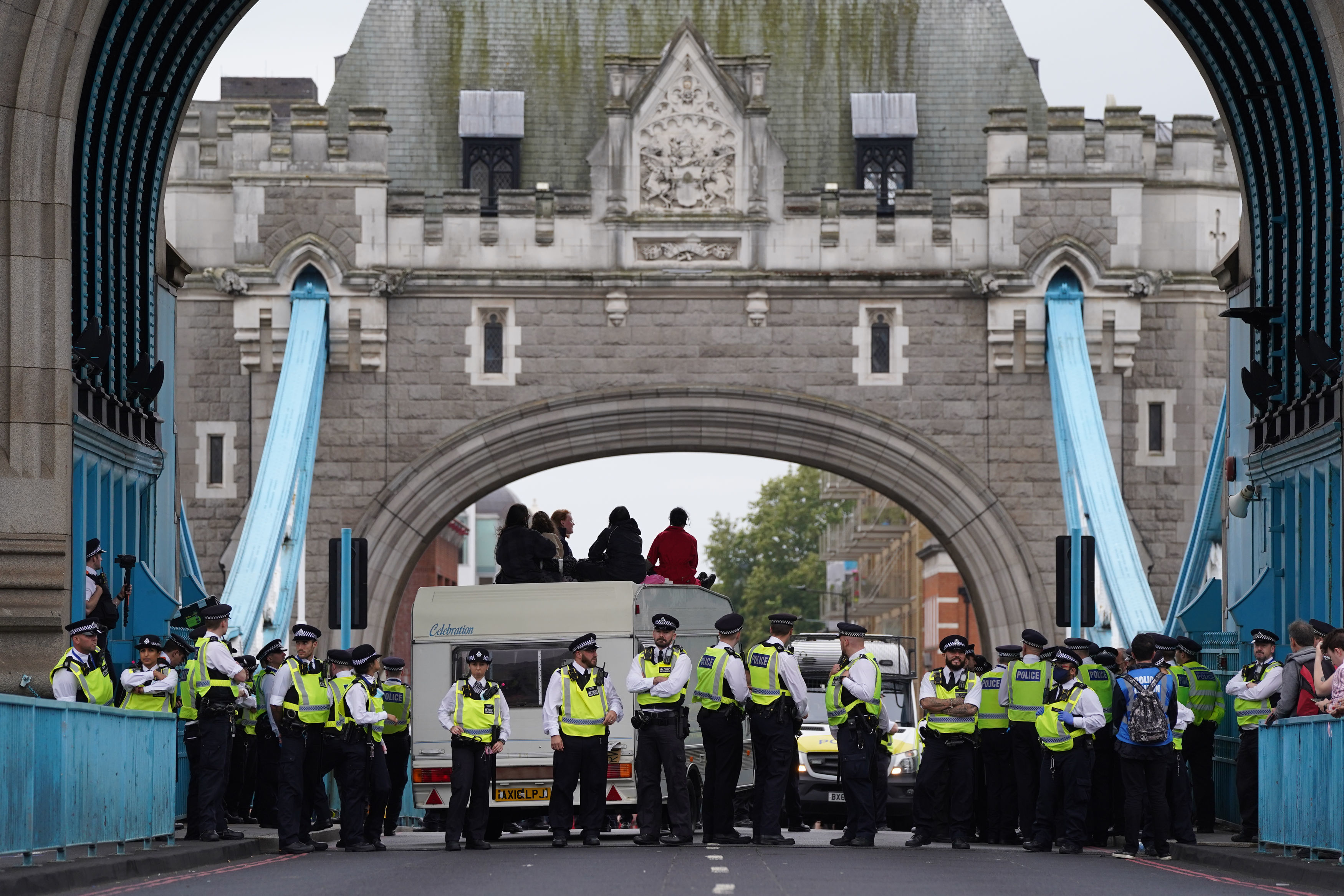 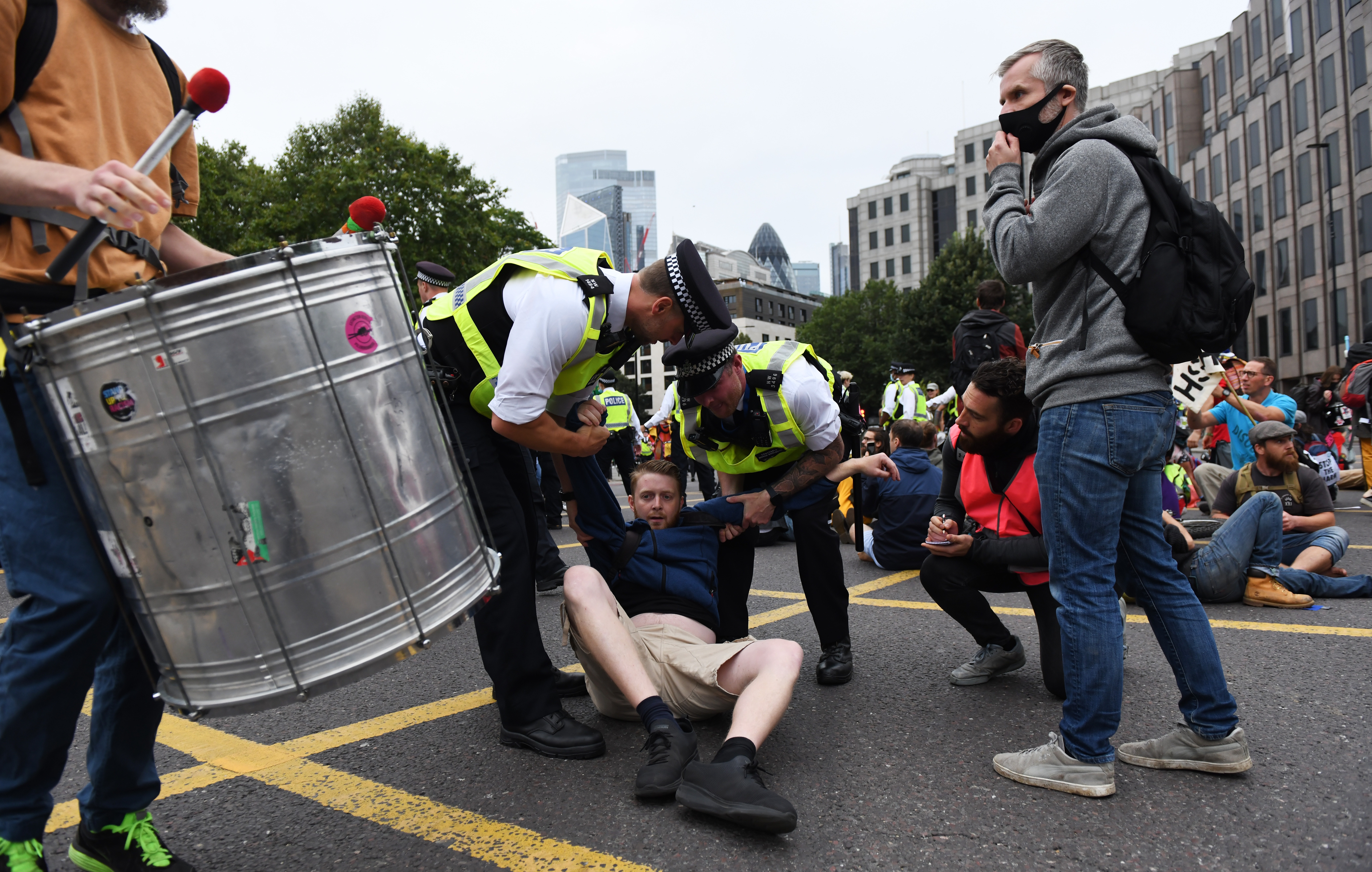 Over the past few days, activists have shut down Oxford Circus, while a group linked to XR smeared fake blood on the Victoria Memorial outside Buckingham Palace.

And in today's stunt, the campaigners recorded speeded-up footage of police grappling with activists as furious drivers waited to cross.

But after they posted the video on social media, police hit back – and say officers "immediately took action" to deal with the mob.

"Officers were on scene almost immediately," the force said.

"We are working with City Police to get traffic moving again. Activists are also laying on the junction north of Tower Bridge.

"This is causing further disruption."

They later warned: "This obstruction of roads is unreasonable and they must disperse. If they do not move, they may be arrested."

Extinction Rebellion tweeted: "Rebels have taken TOWER BRIDGE, and the junction North of there, Mansell Street!

"Tea party is off to a joyous start, with beautiful pink things, come and join us."

The group is carrying out a fortnight-long 'impossible rebellion' which has caused a headache for police and Londoners alike.

On Sunday alone, 34 arrests were made, police say.

Campaigners are demanding the Government stop investing in fossil fuels.

Footage from the scene today shows XR members sitting on top of a caravan parked across the bridge as police run towards then.

A double-decker bus is visible behind the blockade.

Last week, campaigners set up a giant pink table in the middle of Oxford Street, bringing traffic to a standstill.

Some of the activists glued themselves to the structure when police arrived.

The previous day, they blocked roads in Whitehall as part of their protest.

Some set off bright pink flares as police predicted the protests would cause "significant disruption".

One XR group based in Bristol tweeted: "We're not even close to being done with London."

It prompted a fed-up local to reply: "But London is very done with you."

In April, seven activists used tools to break the glass and pasted the message 'in case of climate emergency, break glass' on the front of the building.

And in October 2019, bungling activists attempted to spray fake blood at the Treasury from a fire extinguisher.

However, they lost control of the hose – letting the red paint pour out across the street instead.

Other demonstrations have seen activists create bamboo blockades outside newspaper printing presses in a bid to muzzle the media.

And protesters even hijacked the Cenotaph commemorating Britain's fallen soldiers on Remembrance Day. 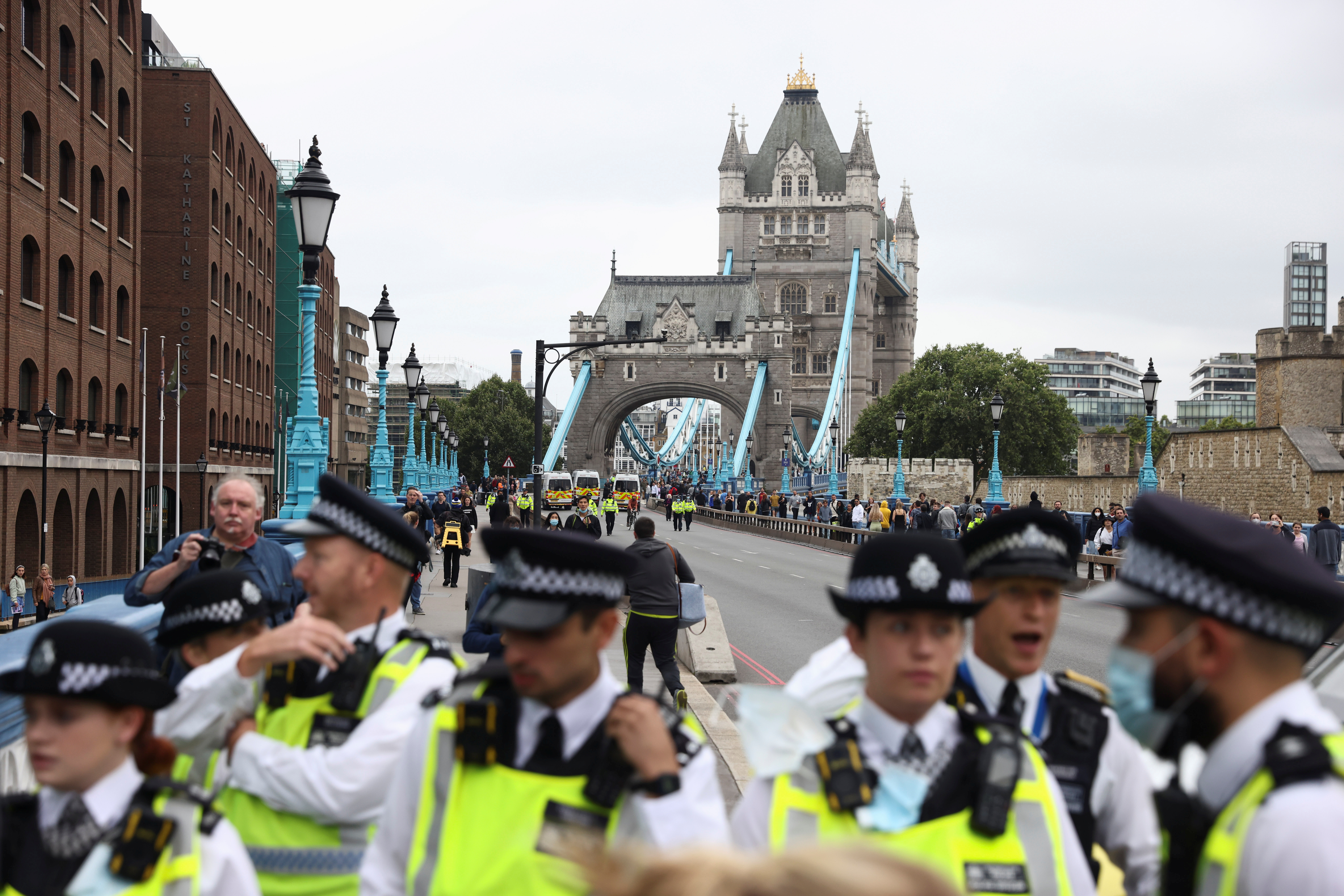 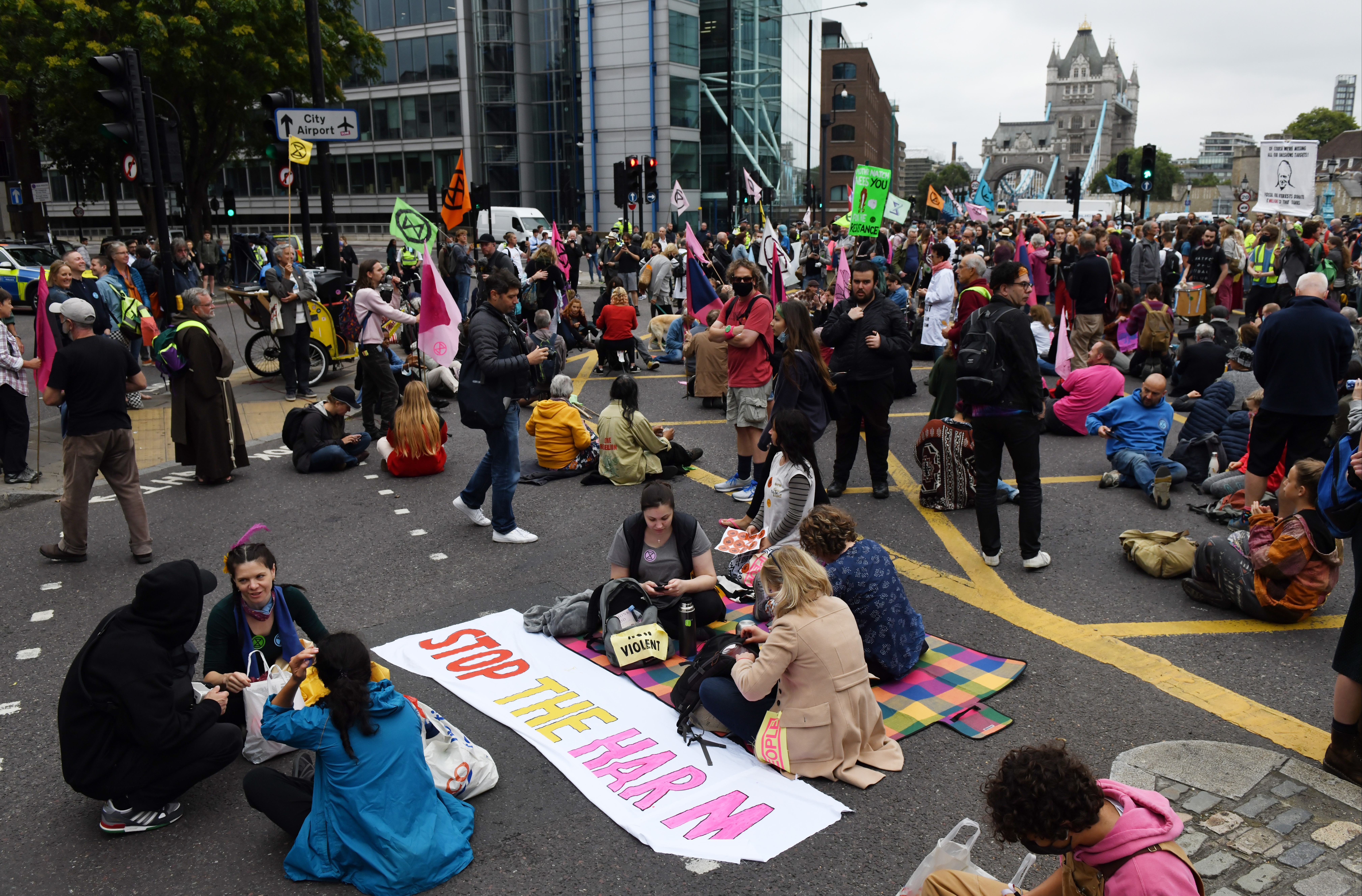 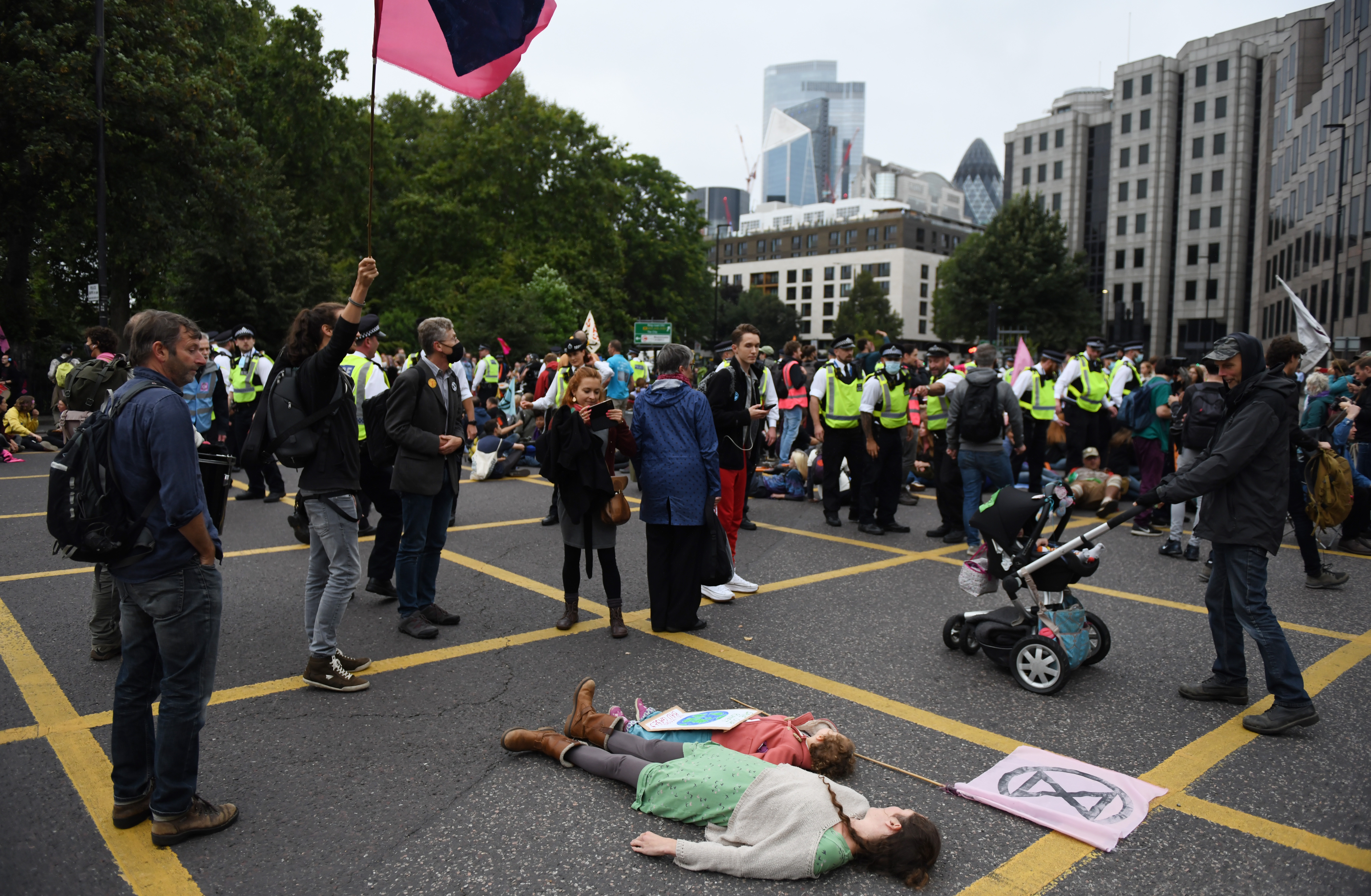