The Queensland Health Facebook page containing vital coronavirus pandemic information has been disabled, as part of Facebook’s attack on Australian news on Thursday. 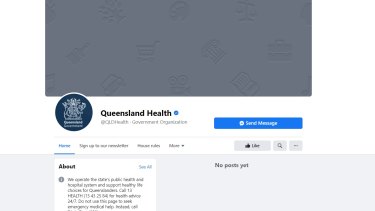 The ban appears to have come into effect for at least some users, who are now unable to post links to Australian news articles on their Facebook pages or see past articles posted by media companies.

International articles from newspapers such as The Wall Street Journal and The New York Times also cannot be viewed or reposted by Australian users.

Facebook has banned publishers and users in Australia from sharing or viewing any news articles on its platform in response to the Morrison government’s proposed media bargaining laws.

The bargaining code, which passed through the House of Representatives on Wednesday night, will require social media companies to pay media outlets for using their content.

In a blog post on Thursday (AEDT) Facebook said that it had carried through on the threat made in September after being unable to find a solution in discussions with the Australian government.

“The proposed law fundamentally misunderstands the relationship between our platform and publishers who use it to share news content,” William Easton, Facebook’s Australia and New Zealand managing director, said.

“It has left us facing a stark choice: attempt to comply with a law that ignores the realities of this relationship, or stop allowing news content on our services in Australia. With a heavy heart, we are choosing the latter.

“Unfortunately, this means people and news organisations in Australia are now restricted from posting news links and sharing or viewing Australian and international news content on Facebook.”