Falklands War veteran recalls moment Argentine bullet ‘took out’ his nose, right eye, cheekbone and front teeth… but he survived after he was carried over minefield on makeshift stretcher

It was the bloodiest conflict of the Falklands War, killing 23 members of the Parachute Regiment and injuring 48 others.

The Battle of Mount Longdon was fought between British and Argentine troops on the night of June 11-12, 1982.

After a night of heavy losses on both sides, UK forces took control of the key rocky terrain around Port Stanley.

Two days later, Argentina was forced to surrender in the Falklands War itself – less than two months after Prime Minister Margaret Thatcher sent troops to engage an Argentine invasion force.

James O’Connell, then 22, was one of the men who was injured in the key battle and only survived after being carried through a minefield on a makeshift stretcher.

Speaking in an interview with History of War magazine ahead of the publication of his book 3 Days in June, Mr O’Connell, now 61, told how an Argentine bullet ‘took out’ his nose, his right eye, cheekbone and front teeth. 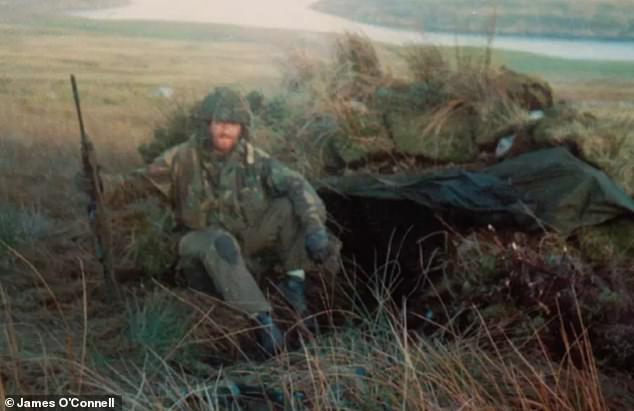 James O’Connell, then 22, was one of the men who was injured in the key Battle of Mount Longdon in the Falklands War. He only survived after being carried through a minefield on a makeshift stretcher 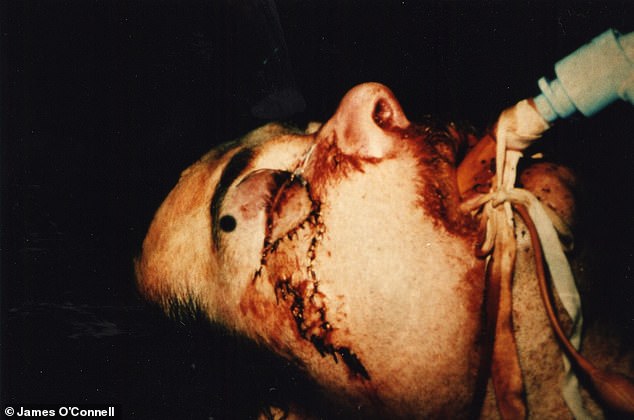 Mr O’Connell, now 61, told how an Argentine bullet ‘took out’ his nose, his right eye, cheekbone and front teeth

The assault on Mount Longdon was carried out by the members of the 3rd Battalion, Parachute Regiment, in the hope of overcoming the heavily entrenched Argentine forces there.

Despite its ferocity, the battle has been overshadowed by far more famous – but less consequential – skirmishes, such as the conflict at Goose Green.

British victory in the battle meant that UK forces occupied the key position around the Argentine garrison at Port Stanley, allowing them to zero in on the enemy and force them to surrender.

As a result of Mount Longdon’s geography, only one company of troops could advance along it.

The night-time approach was a success until a corporal stepped on a landmine, alerting the Argentine forces to the attack.

The members of the Parachute Regiment, including Mr O’Connell, a Private, then came under heavy and sustained attack. 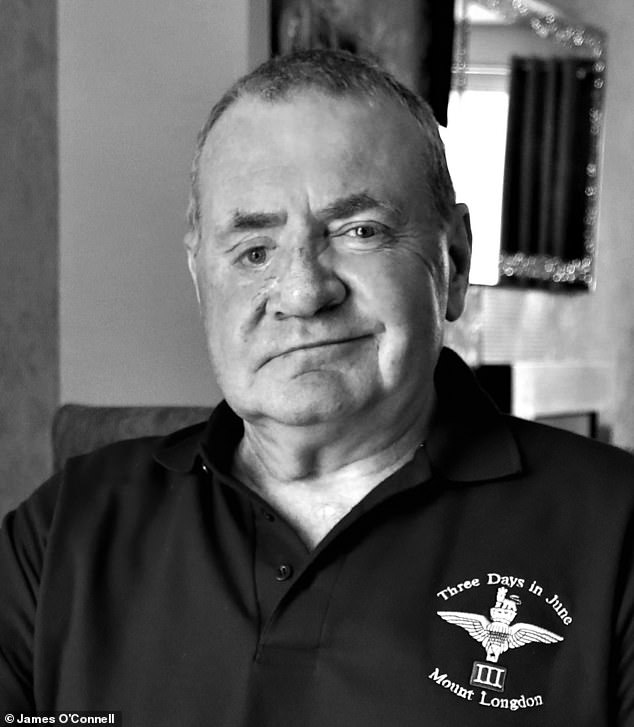 After the war, Private O’Connell (pictured recently) had ‘numerous’ operations over the course of five years 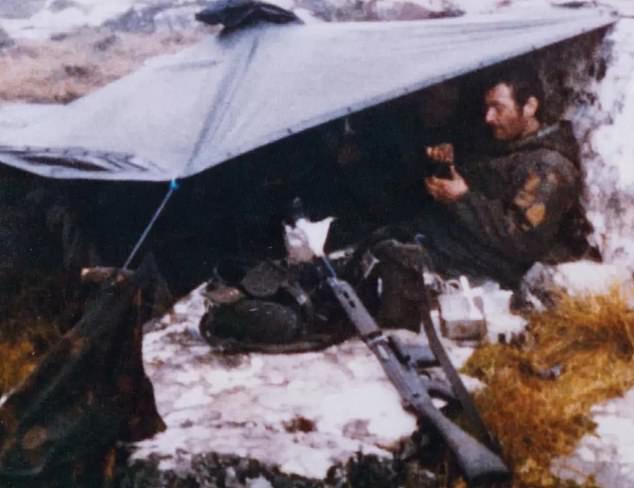 Mr O’Connell said the noise of the mortar and artillery rounds landing was ‘tremendous’.

He said he was hit after his section commander asked him to hand him a night sight.

He said in his book: ‘I received a glancing gunshot wound, a bullet passing from left to right clipping my face as it passed in front of my left eye, then went through the bridge of my nose, took out my right eye and cheekbone, then carried on its deadly journey.

‘The impact also caused my teeth to bang together with such force it knocked out my top front teeth.’

At a time of economic crisis, Argentine leaders believed recapturing the Falklands would restore support for the ruling party.

The UK had ruled the islands for 150 years at the time of the invasion, which the junta justified by saying they had inherited the land from Spain in the 1800s, citing the Falklands’ proximity to South America as a further reason.

But Prime Minister Margaret Thatcher deployed a task force to fight on behalf of the traditionally British residents of the Falklands.

In the short war that followed, 649 Argentinians died, along with 255 British servicemen and three islanders.

Following a tough sea battle, British forces made landing to the north of Stanley, before fighting their way in to the capital. The Argentinians surrendered on 14 June

He added: ‘Experiences like mine were very common on Mount Longdon, which saw a truly shocking number of horrific casualties on both sides.’

After being hit, Mr O’Connell was dragged into a shell hole, which soon became filled with other wounded soldiers.

Because of the constant machine gun fire, the horrifically wounded Mr O’Connell and his comrades were unable to leave their shell hole.

Doctors were at the Regimental Aid Post (RAP) just over half a mile away.

Speaking in History of War magazine, he told how medics would repeatedly shake or slap anyone who fell asleep.

He said they would say: ‘Don’t you fall asleep, stay awake!’.

However, by 6am, it was decided that the wounded men needed help and so ponchos were repurposed as stretchers to move them.

They then set off through a minefield towards the RAP. They continued to come under heavy artillery fire, prompting the wounded to be dropped and the fit men running to take cover.

Mr O’Connell described how comrade Lance Corporal Paul Wray ‘lay across’ him to prevent him getting injured.

When they finally made it to the RAP, doctors decided that Mr O’Connell would not survive and so he was moved to a separate area for dead soldiers who were going on to the temporary mortuary.

The wounded soldier was then taken back and loaded into a Snowcat troop vehicle.

As soon as the Snowcat left the RAP, it came under shellfire because it was moving at such a slow speed.

Eventually, the vehicle made it to an area west of the Murrell River on East Falkland, where the men then waited for a helicopter.

A Gazelle helicopter then arrived and rescued soldiers including Mr O’Connell.

He was first taken to Teal Inlet on East Falkland, before he was flown off the islands entirely.

After the war, Mr O’Connell had ‘numerous’ operations over the course of five years. He said he and many others ‘medicated’ with alcohol.

Speaking in his book of his inability to find a job after leaving the army in late 1984, he writes: ‘I found it extremely difficult getting work.

‘I found a couple of temporary jobs, but a lot of employers simply said, ‘We’d employ you but for your one eye’.’ 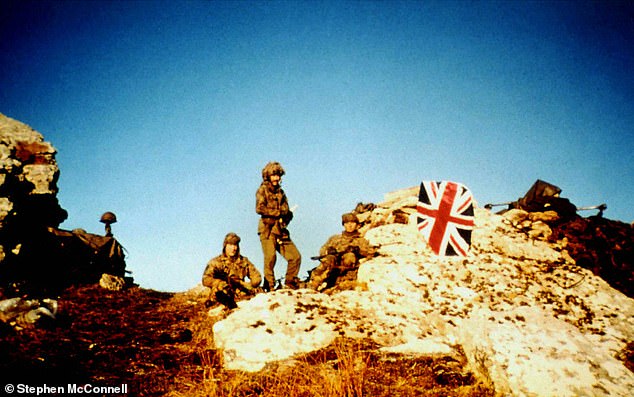 Yet, despite the challenge of having one eye, Mr O’Connell did eventually get a job as a taxi driver.

He described the job – which he died for 23 years and went on to employ five people – as a ‘lifesaver’.

While writing his book, Mr O’Connell interviewed numerous veterans, both British and Argentinian.

He even spoke to a man who had killed a friend of his and wounded others.

Mr O’Connell said he got ‘fed up’ of people asking ‘Were you at Goose Green?’. The Battle of Mount Longdon is less well remembered partly because the Falklands War itself ended just two days later.

He added that ‘everybody’ had heard of Goose Green because it was ‘in all the newspapers’. 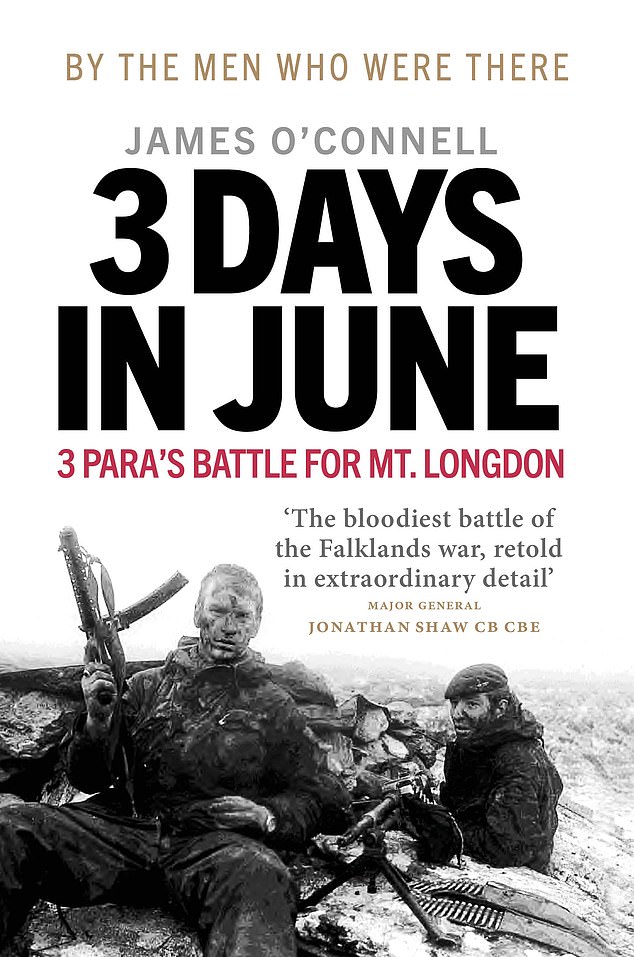 Following the Argentine invasion of the Falkland Islands, 3rd Battalion, Parachute Regiment, were deployed as part of a British Task Force to retake the Islands.

Having landed at Port San Carlos, they trekked across the hilly terrain to take control of the area around Mount Longdon, situated to the north west of Port Stanley, the capital of the Falkland Islands.

Before British forces could retake Port Stanley, it was essential that the high ground around the capital was taken.

They were told to expect around 800 Argentine soldiers defending the Mount who were well dug in and provided with artillery cover. 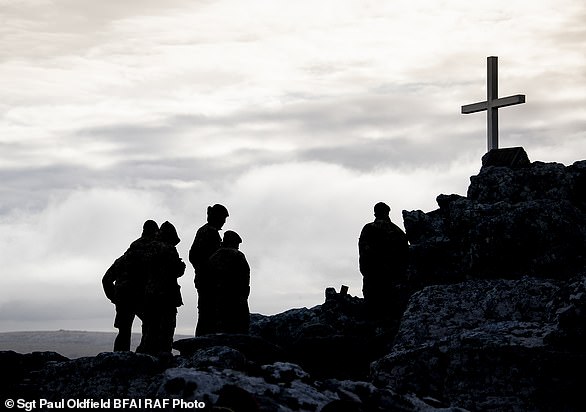 Mount Longdon is a long narrow feature of rocky terrain, running from east to west with two summits.

As a result of its geography only one company attacking could advance along it.

They made the cross just after midnight. It was a silent approach until a corporal stepped on a land mine, which alerted the enemy to the attack.

At this point the enemy opened fire and fierce fighting ensued.

They were coming under heavy, sustained and accurate enemy fire but seized Mount Longdon by 11am on 12 June.

By this time, 3 PARA had been fighting for ten hours and they would remain under heavy artillery fire for a further 36 hours from Mount Tumbledown. During this period an additional four soldiers were killed in action.

Accounts vary on the Argentinean casualties, with between thirty to fifty killed, a similar number taken prisoner, and up to one hundred and twenty wounded.