‘Our girls were brainwashed. It’s no big deal, get them home’: Families of two other Bethnal Green schoolgirls say the ISIS brides should be forgiven

The families of two other Bethnal Green Academy schoolgirls who ran away to become Islamic State jihadi brides begged them to ‘come home’ yesterday.

The father of Sharmeena Begum – the first teenager from the East London school to flee to Syria – urged the British Government to forgive her.

Begum, who loved watching EastEnders and wanted to be a doctor, vanished in December 2014 at the age of 15. Two months later she was joined in Raqqa, the self-styled capital of the Islamic State, by her best friends Kadiza Sultana, Amira Abase and Shamima Begum.

Last night Sharmeena’s father Mohammad Uddin said the girls should be forgiven because they were radicalised and brainwashed. A local imam disagreed, saying they were ‘a danger to the community’. 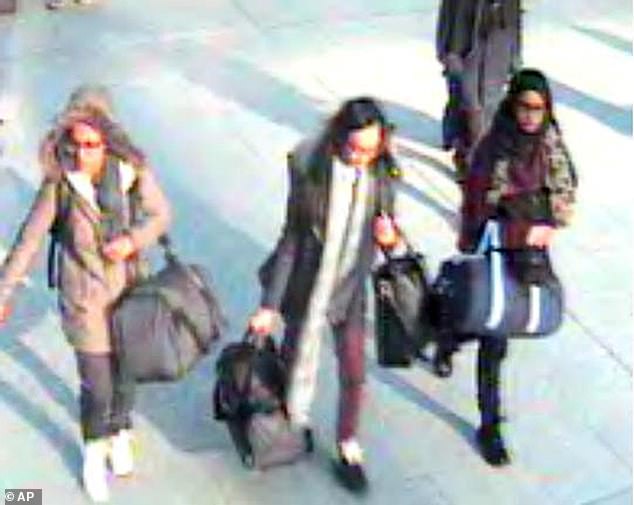 Mr Uddin, a restaurant worker, said: ‘They should all be allowed to come home. When they went to Syria they were not mature and they had been radicalised.

‘They were not able to form their own opinions because they had been brainwashed. They went when they were very young and it’s not a big deal if they realise what they did is wrong. We should forgive them.

‘If they do the wrong thing and then realise “that was totally wrong” then they should be forgiven. If my daughter could come home and say “forgive me”, I would forgive her, obviously.’

Abase’s father Hussen claimed that his daughter fled to Syria on a humanitarian mission after seeing images of civilians starving on the internet. He urged the Government to let her and the others back in to the country, insisting: ‘They are no threat to us.’

Mr Abase, 52, a security guard who came to Britain as a refugee from Ethiopia in 1999, said: ‘The girls should be allowed to come back. When they left the country they were teenagers. They [British officials] have to understand that.

‘She is a naturally generous person. She saw in the media and on the internet [that] people over there are starving and I think she wanted to go and help. I have had no contact with her since she left. It’s been very hard on my family – I have a wife and two other children, aged 13 and 17. They all miss her. It was just a mistake that the girls left their families to go to a place like that.’ 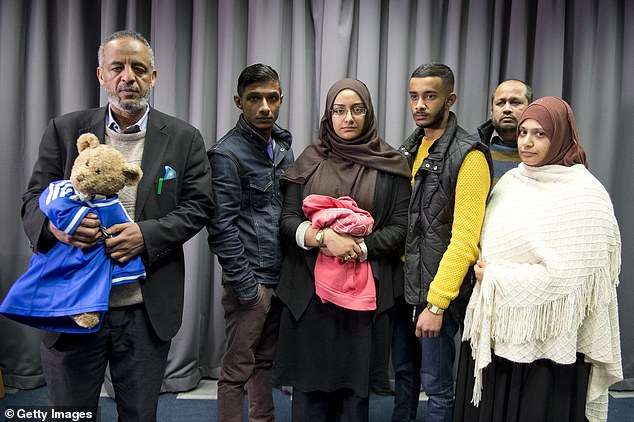 Shamima Begum, the third surviving Bethnal Green schoolgirl, who is pregnant with her third child, was tracked down by The Times to a refugee camp in northern Syria. Her family echoed the words of Mr Uddin and Mr Abase and pleaded with the Government to allow her to return to the UK.

Her sister Renu told ITV News: ‘She’s pregnant and vulnerable, and it’s important we get her out of al-Hawl camp and home as soon as possible. We hope the British government will help us bring her home to us where she belongs. This news has come to us as a shock.’ Tasnime Akunjee, the family’s lawyer, added: ‘The family do not want to comment, they are trying to process it at the moment.’

Mr Akunjee said he was not sure if Begum’s family are considering whether they would take custody of her child if it was removed from her care on her return to the UK. 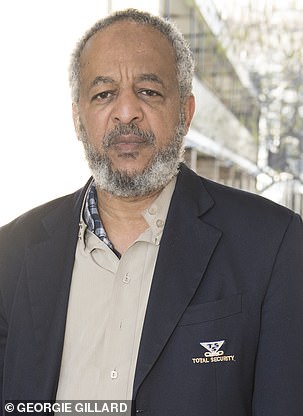 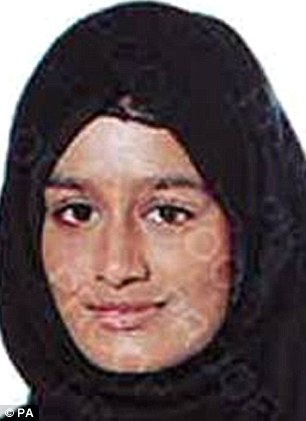 Abase Hussen, 52, the father of Amira Abase, (left today) welcomed news that his daughter and her friend Shamima Begum (right) are alive ans said that they should come back to Britain if then can

‘That’s something they would have to work out for themselves,’ he said. ‘My role with the family is trying to bring Shamima back.’

When asked if Shamima could be prosecuted, he said: ‘The question would be has she committed any offences? It depends on the evidence there is of her activities.

‘These girls were children that were groomed and once someone is out there it is difficult to try to come back… sometimes it can be lethal.’

Mr Uddin issued an emotional plea to his daughter, saying: ‘All I want is for you to come home. I last heard from Sharmeena two or three months ago.

‘She sent me a WhatsApp message. She said: “I’m okay, how are you?” But by the time I saw the message I couldn’t contact her back, the number wasn’t going through. I think she [sent messages] from internet cafes. She hasn’t told me she wants to come home or anything, just a few messages.’ 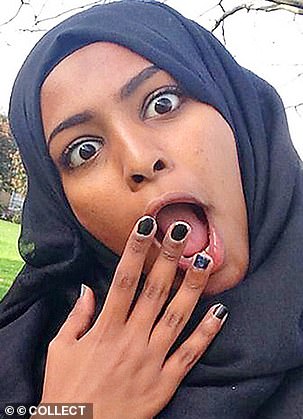 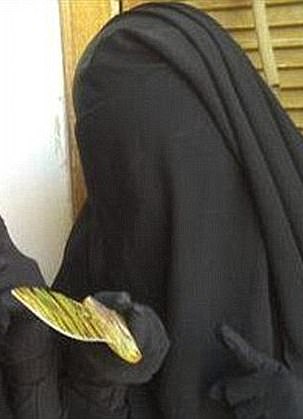 Bethnal Green runaway Amira Abase (left in September) used a pictured of a woman in a full veil clutching a knife on her Twitter page, which has been shut down

The family of Sultana, who is believed to have been killed by a Russian airstrike on Raqqa in 2016, did not want to comment.

East London community leaders in the area warned against letting the girls return. Moulana Malik, the imam at the Baitul Aman mosque and cultural centre in Bethnal Green, said: ‘For the peace of the country we think that for all types of criminal people we don’t want them to come back into the community or at large.

Mr Abase himself came under fire after it emerged that he had been part of a flag-burning mob outside the US embassy in London in 2012. 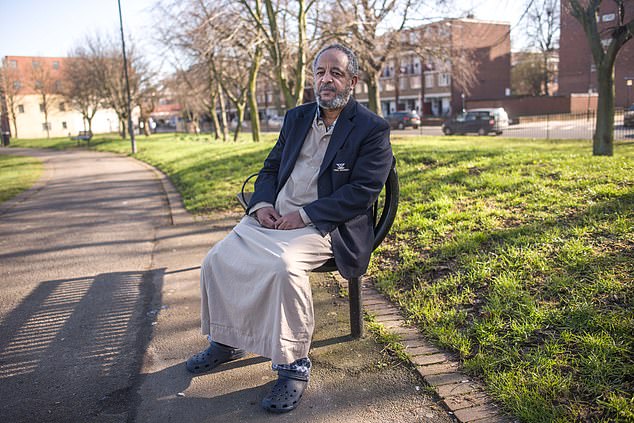 Mr Abase, 53, says the families of the ‘Bethnal Green three’ have been badly treated

Also at the rally were hate cleric Anjem Choudary and Michael Adebowale, one of the killers of Fusilier Lee Rigby. Mr Abase admitted going to two further rallies, with his impressionable daughter in tow.

The mother of the white British Islamic convert known as ‘Jihadi Jack’ joined the calls for Shamima Begum to be allowed back into Britain. Sally Letts, 55, said at her Oxford home: ‘Of course she should be allowed back. She was a child, she was groomed and abused and now they want to judge her as an adult!’

Jack Letts, 22, went to IS territory and was captured two years ago by Kurdish fighters. He is awaiting trial in northern Syria.

Letts denies joining the terror group and his parents deny three charges of financially aiding terrorism. They are due to go on trial at the Old Bailey in May. They allege Letts went to the region for ‘religious and humanitarian reasons’.

Q&A: Can Shamima Begum come back to Britain and what happens if she does return?

Can Shamima Begum come back to Britain?

Begum is likely to face many obstacles to returning to the UK. Not least is the fact that she is being held in a secure section of a refugee camp. Security minister Ben Wallace has ruled out any rescue, saying he will not risk UK lives to ‘go and look for terrorists or former terrorists’. If the Kurds in control of the camp hand her over to Iraq or Turkey, she could be put on trial and jailed. However, she could also walk into a British consulate and demand help to be brought home to the UK.

Can the UK strip her of her citizenship?

Ministers have stripped jihadis and Islamic State brides of their citizenship and banned them from returning to Britain. But the ‘deprivation orders’ can be issued only to those with dual nationality – which does not apply in Begum’s case. Ministers cannot take away citizenship if it would leave a suspect stateless.

What happens if she does return to Britain?

She would be arrested. Mr Wallace has said everyone who returned from taking part in the conflict in Syria and Iraq must be investigated by police. Scotland Yard would launch an investigation to determine if she committed any crimes, and if she poses a threat to national security.

Would she be prosecuted?

After Begum and her friends travelled to Syria, the head of counter-terrorism at the time, Met Police assistant commissioner Mark Rowley, said: ‘They have no reason to fear, if nothing else comes to light, that we will be treating them as terrorists.’ Tasnime Akunjee, the solicitor for the families of the three girls, said: ‘Effectively, this is immunity.’ The Director of Public Prosecutions, Max Hill QC, said in 2017 that it was right that those who travelled to Syria out of naivety at a young age and who returned in a state of ‘utter disillusionment’ should be diverted away from the criminal courts.

What offences could Begum be charged with?

Ministers are introducing terror laws to target IS fighters who cannot be prosecuted for other crimes because of a lack of proof. The Counter-Terrorism and Border Security Bill would make it an offence punishable by up to ten years in jail for anyone to enter a ‘designated area’ abroad unless they can provide a ‘reasonable excuse’. But the proposed legislation could not be applied retrospectively to Begum. The sentence for being a member of IS, or supporting the group, is up to ten years in jail. Other offences that could be considered include disseminating terrorist materials, terrorist fundraising and terrorist training. Any involvement in killings could lead to a murder charge.

How easy would it be to bring a prosecution in Britain?

Even if Begum assisted in atrocities or committed other crimes such as encouraging others to go to Syria, it would be difficult to prove. Jihadis returning to their home countries have been prosecuted on the basis of fingerprints recovered by American troops from bomb parts on the battlefield, but it is unlikely that evidence would have been gathered on the activities of a 15-year-old jihadi bride.

So how will she be treated by the UK authorities?

Begum is likely to be given a temporary exclusion order (TEO), which would last for a maximum of two years. The order, which she has to agree to in order to get back into the country, is approved by a judge before being issued by the Home Secretary. It makes it illegal for an extremist to return to the UK without informing the authorities and agreeing to be monitored.It is supported by cancelling their passport and adding their names to terrorist and criminal watch lists against which every person arriving in Britain is checked. Anyone on a TEO has to agree to a range of conditions, including taking part in de-radicalisation programmes and strict police supervision.