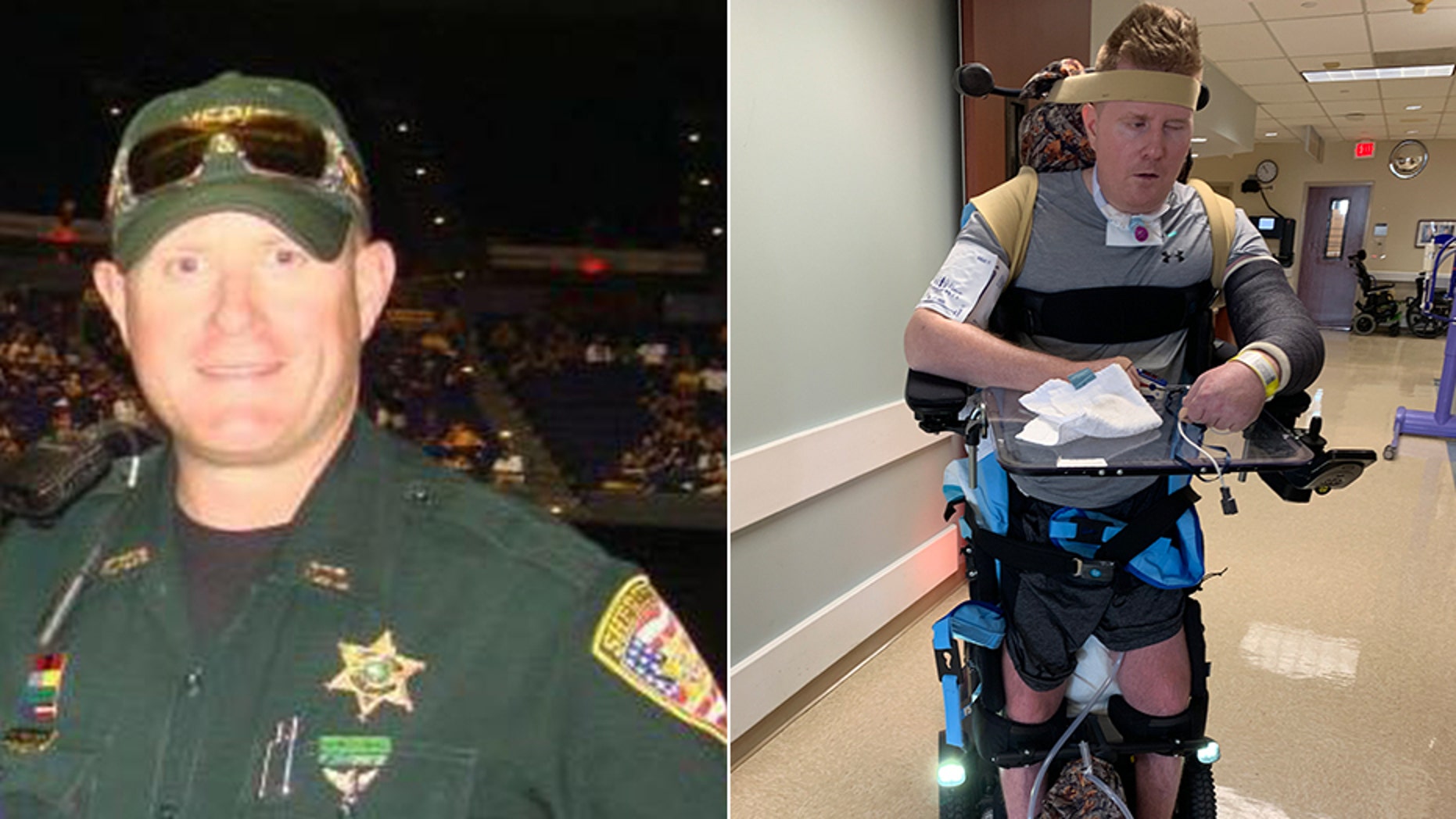 Nick Tullier, a former East Baton Rouge Sheriff’s Deputy, has been battling injuries for more than two years after being targeted in an ambush attack in 2016. His father, James, tells Fox News that getting the treatment his son’s medical team is seeking is sometimes more complicated than it should be — and is adding strain to the recovery process.
(Courtesy James Tullier)

Police officers across the nation put their lives on the line every day to protect Americans, but, when it comes time to repay that debt, families and advocates say the system in place leaves them "left out to dry."

Several people whose loved ones have suffered serious injuries in the line of duty tell Fox News they're forced to fight healthcare providers and bureaucracy instead of being able to exclusively focus on the recovery process. A new national apparatus, they say, may be key in helping families of the wounded navigate a complex web of laws and benefits programs, which vary across states, towns and cities.

“Our primary attention, purpose, goal should be the care of our loved ones instead of wasting our time battling insurance companies,” James Tullier, the father of Nick Tullier, a retired East Baton Rouge Sheriff’s Deputy, told Fox News.

Nick’s life changed forever in 2016 when he was shot in the head, shoulder and abdomen in an ambush attack while responding to a call about a suspicious vehicle.

Over the past few years, Tullier – who is undergoing treatment in Houston — has been fed through a tube and has been fighting pneumonia, seizures and other complications related to his injuries. He can’t speak and is working with therapists to help move his arms, legs and head again, his father says. In December, Nick was sent a letter by President Trump with the message “Get Well Fast!” and a Facebook page is posting daily updates about his recovery. 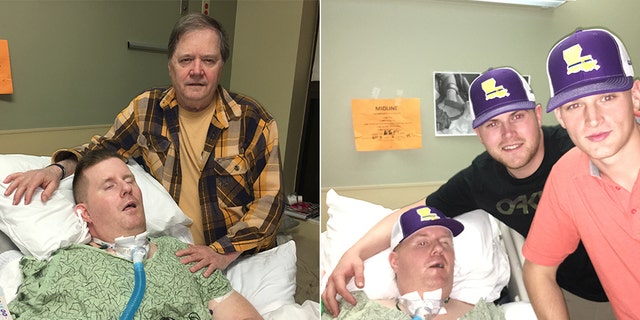 Nick Tullier spent his most recent Christmas in the hospital, with his father James, left, and sons Trent and Gage, center and right.
(Courtesy James Tullier)

“Nick has got years ahead of him that I hope medical science will develop some procedure to help,” James Tullier told Fox News, adding his son has already “done so many things that doctors originally said he could never do.”

But Tullier says he has had issues over the years with getting funding for some of Nick’s treatments approved, due to disagreements tied to the healthcare and benefits packages he has been covered under.

“They are in the business of trying to pay out as little as they can,” he claims. “That is what is going on with these officers.”

POLICE OFFICER DEATHS ON THE RISE IN EARLY 2019

Tullier says “every couple months” he gets calls from families of other injured cops seeking advice on how to best chart their way through the system.

“It’s time for federal government to get involved and let’s get some kind of team to get together to come in and help [these families] immediately,” Tullier told Fox News, comparing the situation to how FEMA helps those whose lives have been upended by natural disasters. “I don’t know what part of the federal government it would come from, but that is the only way you are going to get us all on the same playing field.” 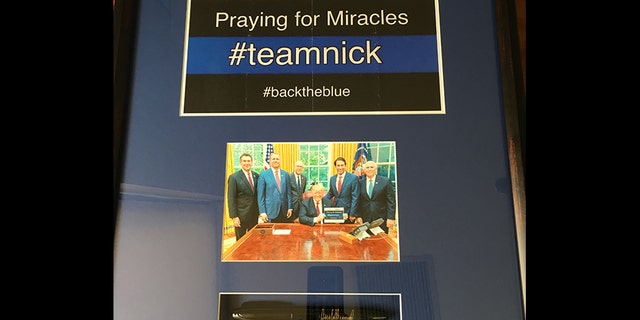 SEEKING A CHANGE ON CAPITOL HILL

The Justice Department already has the Public Safety Officers Benefits (PSOB) Program in place, which “provides death and education benefits to survivors of fallen law enforcement officers, firefighters, and other first responders, and disability benefits to officers catastrophically injured in the line of duty.” The program gives out lump-sum payments after reviewing around 900 claims each year, it tells Fox News, with funding for it approved annually by Congress.

Yet for some first responders who apply to the PSOB, it can take “over a year to get an approval or disapproval,” Randy Sutton, founder of The Wounded Blue – an organization that advocates for injured and disabled officers – told Fox News.

The PSOB says “regarding the time required for a determination of a claim, it is based on many factors including the complexity of the case. The most important factor is often how long it takes for all of the required documentation to be submitted to the PSOB Office by the claimant and officer’s agency.”

On Capitol Hill, Heidi Paulson, the legislative liaison for The Wounded Blue, says the group helped introduce the “Putting Our First Responders First” bill in the House and Senate last May.

“This bill makes line of duty disability pensions exempt from federal withholding. We have bi-partisan support in both branches and had hoped for passage before the end of last year; however, the deadlocks in Congress have left us stuck,” she told Fox News. “We are also working on legislation that will help keep first responders and their families from being dropped from their medical insurance after catastrophic injuries, help provide disability insurance options, reign in work comp issues, [and] open the door for VA benefits for veterans who went into law enforcement after their military service.” 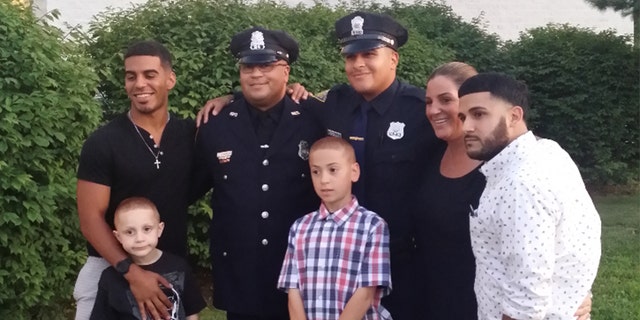 Debbie Roselle, second from right, is trying to seek changes to the benefits her husband Phil, second from left, is receiving after he was shot by a fellow officer during a gun range training session in 2017.
(Courtesy Debbie Roselle)

Sutton is a former Las Vegas Metropolitan Police Department lieutenant and told Fox News he had to go to court to fight over medical bills after a stroke on the job forced his retirement.

He claimed in some cases, those responsible with providing funding for treatments of wounded cops “will try to wait the injured officer out so they will either give up, die in the meantime or let their private insurance take some of it and [then] they will give up."

“There needs to be a compassionate, humanistic approach to catastrophically and seriously injured law enforcement,” Sutton said, while noting a greater emphasis is also needed on helping officers who suffer from Post-Traumatic Stress Disorder related to incidents they have been through on the job.

In January, Blue H.E.L.P., a non-profit organization that monitors law enforcement suicides, reported that for the third consecutive year more police officers committed suicide than were killed in the line of duty.

“Right now it all depends on where you are and who you work for,” Sutton said, adding that “the reality is around the nation, every state has its own worker's comp system and some are good, some are not."

“If there was a uniform federal program that law enforcement officers could access that would bring some type of protection and relief that would be the best of all things,” he added.

Dennis Slocumb, the Legislative Director for the International Union of Police Associations, also told Fox News that “part of the problem is that worker's compensation and other means of rehabilitating first responders have not kept pace with medical care."

“While many are surviving what would have been fatal injuries years ago, provisions for their treatment and rehabilitation have not kept up,” he said. 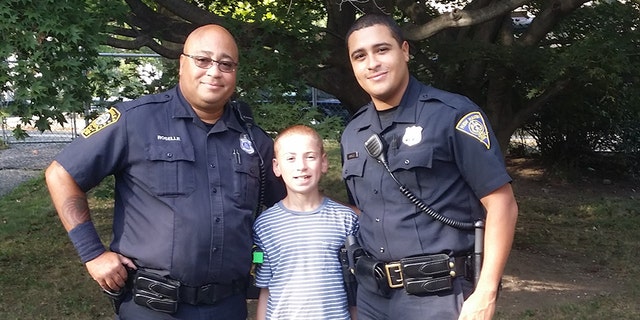 One of Phil Roselle’s sons, Justin, followed in his father’s footsteps and has become a police officer in New Haven, a city on Connecticut’s coastline about 30 miles east of Norwalk.
(Courtesy Debbie Roselle)

THIRTY YEARS OF SERVICE, AND NOW BEING ‘LEFT OUT TO DRY’?

Debbie Roselle, the wife of a Norwalk, Connecticut police officer who has suffered permanent nerve damage to his right hand – amongst other complications — after being shot by another cop during training at a gun range in 2017, is trying to change the system for her husband at the local level.

She told Fox News she has been having issues with Connecticut’s worker’s compensation program regarding her husband Phil’s treatment, such as disputes over which doctors he should be seeing. In a letter sent to Norwalk’s mayor, Harry Rilling, she asked him to consider drafting “Special Legislation” for Phil similar to what public safety personnel in neighboring Massachusetts have received, in which exemptions are made to give injured officers pension and benefits packages that go beyond the regular amounts.

“All we are hoping for is that you, Mayor Rilling, would consider giving Phil a different retirement package than what he would normally receive in retirement due to the fact that Phil’s 30-year career serving the City of Norwalk CT was traumatically cut short at no fault of his own,” she wrote. 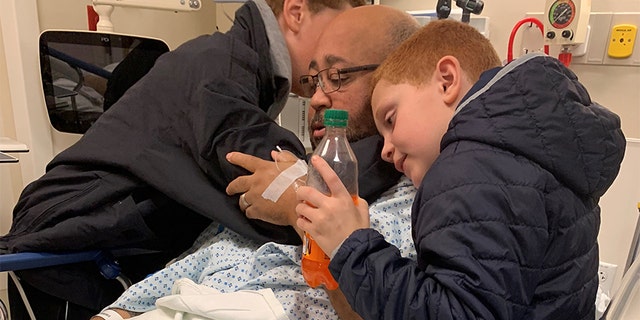 But Rilling said in a statement to Fox News that “what Ms. Roselle is asking for would not fall under the purview of the mayor."

“I cannot mandate something that is handled at the state level, but I am supportive of furthering benefits for our first responders,” he said.

“Locally in Norwalk, the City makes up any shortfall in pay for officers injured in the line of duty. Since there is a monetary difference between Officer Roselle’s base salary and what the state workers’ compensation is paying, we have been bridging the gap to ensure he receives 100 percent of his wages,” he added.

For Debbie Roselle, she says she is just trying to give Phil “some justice” and “some hope.” The officer is also working towards improving his health in hopes of getting a kidney transplant.