Family of three ‘are forced to wait NINE hours for food and water’ while they were taken to £2,400 quarantine hotel in Birmingham after they arrived at Heathrow from red-list India

A family of three were forced to wait nine hours with ‘no food or water’ before reaching their quarantine hotel after arriving from ‘red list’ country India.

Savio D’Souza, 34, from Battersea, London, arrived from India to Heathrow Airport on June 27 with his wife and two-year-old daughter.

He described the government’s hotel quarantine system as ‘utter chaos’ after he waited hours to reach his hotel in Birmingham to begin his 10-day quarantine.

Savio D’Souza, 34, from Battersea, London, arrived from India to Heathrow Airport on June 27 with his wife and two-year-old daughter and is now quarantining in a hotel in Birmingham (pictured)

Despite living in the capital, Savio,and his family were allocated a hotel in Birmingham to quarantine in, costing a total of £2,400 and located more than 120 miles from his home. It is not clear which hotel he is quarantining in.

He said: ‘The entire process (booking, registration and processing) is convoluted, undermanned and inefficient. It was strict but it wasn’t clear at all.’

Savio added: ‘The government has washed its hands of it [and] outsourced the problem to these [companies who are] terrible for customer service.’

The family left the UK to attend a wedding in what was then ‘green list’ India on April 16 and spent over 70 days there. 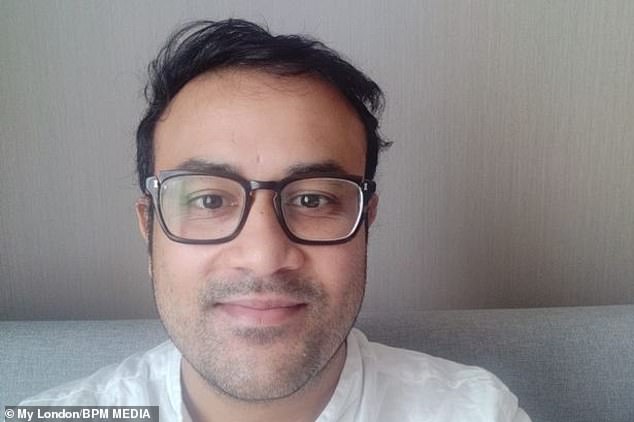 India was put on the red list on April 23, despite neighbouring Pakistan and Bangladesh having been on it since April 9.

The government has since faced criticism for the delay of adding India to the red list after concerns that this contributed to the rise in cases of the Delta variant, which has since become the dominant strain in the UK.

Government guidelines state arrivals from ‘red list’ countries, including India, Brazil and South Africa, must quarantine for ten days inside a designated hotel.

Those arriving in the country must take two Covid-19 tests during the duration of their stay in England.

The Department of Health and Social Care have said people could be fined up to £10,000, imprisoned for up to 10 years, or both if they do not provide accurate details about the countries they have visited in the last 10 days of re-entry into the UK.

Despite living in the capital, Savio,and his family were allocated a hotel in Birmingham to quarantine in (pictured), costing a total of £2,400 and located more than 120 mile away from his home

The DoHSC also say that people will be fined up to £10,000 if they break quarantine rules.

The father-of-one expressed specific concerns regarding the hotel booking system which the Department of Health and Social Care has reportedly ‘outsourced’ to Corporate Travel Management (CTM).

According to its website, CTM is a ‘global provider of innovative and cost-effective travel solutions spanning corporate, events, leisure, loyalty and wholesale travel’.

Savio claims: ‘They had no idea what they were doing. Their booking process is so complicated.’

Couple claim they were forced to eat ‘cold, wet and difficult to digest’ food in quarantine hotel

Tracey Smith, from Grimsby, repatriated to Dubai, a ‘red-list’ country, in February of this year to join her husband, Jim, who has lived there for the past two years.

Tracey Smith, from Grimsby, and her husband Jim (pictured together) checked in at the hotel for 11 nights under imposed quarantine conditions

However she flew back to the UK on May 11 as her home was due to be sold and checked in at the Courtyard by Marriott London City Airport for 11 nights under imposed quarantine conditions, at the price of £1,750.

Mrs Smith, who remained at the hotel until May 22, has claimed she and her husband were unable to open the windows in their room and the food they were given was ‘often cold, wet and small in portion size’, making it ‘difficult to digest properly’. 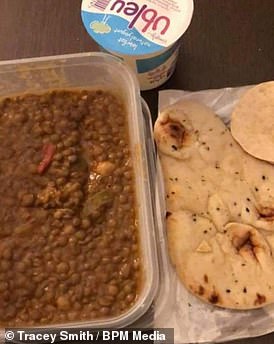 Tracey Smith, from Grimsby, checked in at the quarantine hotel with her husband Jim after returning from Dubai

She said: ‘The room had windows but I couldn’t open them so it felt as though we couldn’t get any proper ventilation entering the room.

‘The room was very clean, not exactly huge, but manageable to live in.’ 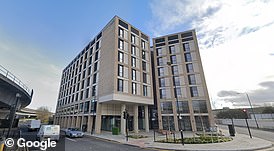 The couple, from Grimsby, checked in at the Courtyard by Marriott London City Airport for 11 nights under imposed quarantine conditions

Mrs Smith said the experience of the stay was made worse by the quality of the food.

Following the claims, a spokesperson for Courtyard London City Airport said the couple sent a personal letter to the management team when they checked out, praising their experience and calling it ‘faultless’.

The spokesperson said: ‘We were very sorry to hear of our guests’ concerns after their very positive comments to our team during their stay with us.

He claimed he had to call CTM more than 15 times and was ‘on hold for an average of 50 minutes’ to confirm his hotel booking and that ’30 per cent’ of his calls were hung up on.

In the end, Savio said he only received confirmation of his quarantine hotel 3.5 hours before he was expected to board his flight back to the UK.

At the time of Savio’s flight, passengers on direct flights from red list countries were being transferred to Terminal 3 after concerns were raised at Heathrow Airport that such passengers were mixing with those arriving from countries on the green and amber lists.

He said: ‘They dump people there. Half of the staff there are not wearing masks or not wearing it properly.

‘I don’t know what they were thinking. Social distancing [in the queues] is not great.’

The family of three arrived at the waiting area in Terminal 3 at around 2.30pm on Sunday and their coach to Birmingham arrived over four hours later at approximately 7pm.

They say they were left without ‘food or water’ during their 4.5 hour wait for the coach to arrive.

According to Savio, all shops and food outlets were closed in Terminal 3 and the ‘vending machines didn’t work.’

This meant Savio’s two-year-old daughter did not have access to proper food during the wait.

He said: ‘I don’t know how she got through it.’

The 34-year-old dad, along with his wife and young daughter, are currently in quarantine in their hotel in Birmingham.

He said the government quarantine system is a ‘good idea in principle but [is] poorly executed and managed’.

A spokesperson from CTM said: ‘CTM was appointed by the UK Government to facilitate bookings between citizens returning to the UK and participating hotels as part of the UK Hotel Quarantine Programme.

‘While we cannot comment on individual cases, we are adapting our resources to manage very high volumes of calls from travellers returning to the UK.

‘Each traveller has unique, and often complex, travel requirements.

‘We are working to meet these individual requirements for every traveller, and acknowledge that returning to the UK during the pandemic is a stressful experience. CTM is committed to supporting British citizens to safely return home to the UK.

‘Hotel allocation is based on availability, with the closest participating quarantine hotels nearby government-approved ports of entry prioritised for returning UK citizens.

‘Where nearby participating hotel availability is limited, travellers are allocated the nearest available hotel, with transport regularly available to the hotel and back to the airport upon finishing quarantine.’

A Heathrow spokesperson said: ‘Red list routes will likely be a feature of UK travel for the foreseeable future as countries vaccinate their populations at different rates.

‘This system has been designed by the Government and has several layers of protection to keep passengers and colleagues safe – including mandatory negative COVID tests for all international arrivals, mandatory use of face coverings, social distancing and enhanced cleaning regimes and ventilation in immigration halls.’

Savio’s experiences come as holiday hotspots Malta, Madeira and the Balearic Islands recently moved onto the UK’s quarantine-free green list, with package breaks for a family of four to Menorca available from £456 for three nights.

And in a further dose of good news for travellers, reports suggested the requirement to quarantine upon return to England from amber list countries could be dropped for double-jabbed travellers from June 30.

A minister told The Times it is hoped the change ‘will be in place by the first week of the summer holidays’.

The move could reopen travel to much of Europe but the extent to which trips will be possible will be largely determined by the border rules imposed by European capitals.

As a result, UK ambassadors have been instructed to launch a charm offensive to persuade EU member states to ease restrictions on British travellers. 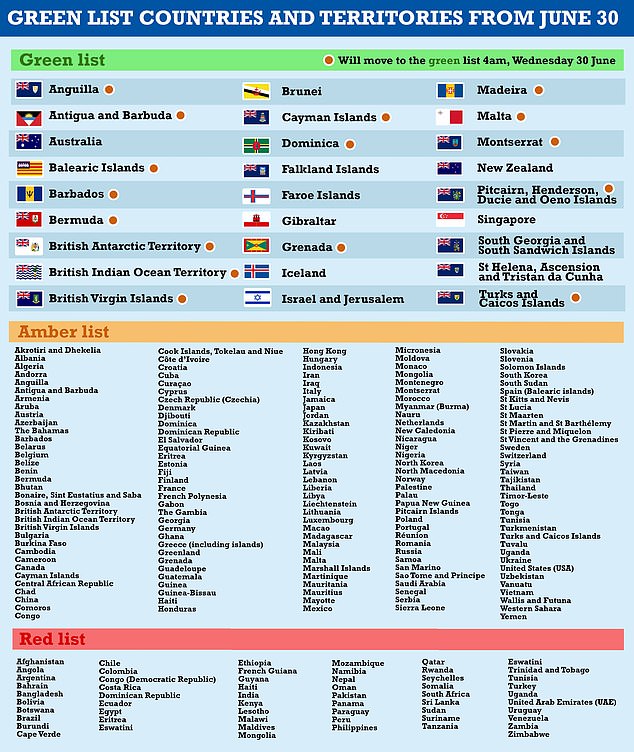