‘But I’m PROUD to be called Mrs’: Fans’ fury as Wimbledon scraps ‘Miss’ and ‘Mrs’ in front of female winners on its honours boards – as it emerges the Government’s own website doesn’t offer a title option

Women have reacted with fury after Wimbledon announced it would remove ‘Miss and Mrs’ titles from the list of female winners on its historic honours board.

The All England Lawn Tennis Club’s winners boards – with the most prominent being in the clubhouse – have had the honorifics in front of victorious women since 1884.

Yesterday,  the historic tennis tournament confirmed it would scrap gendered titles when recognising winners of the ladies’ championship in order to ‘move with the times’.

But dozens of women reacted with shock online, pointing to the fact they were proud of their title and would be disappointed to have it ignored.

Others challenged the erosion of a long-standing tradition that dates back to the 19th century.

The debate intensified as it was revealed there was no option to choose a title when setting up new accounts with Google, the BBC or when editing a profile on the official Gov.uk website. 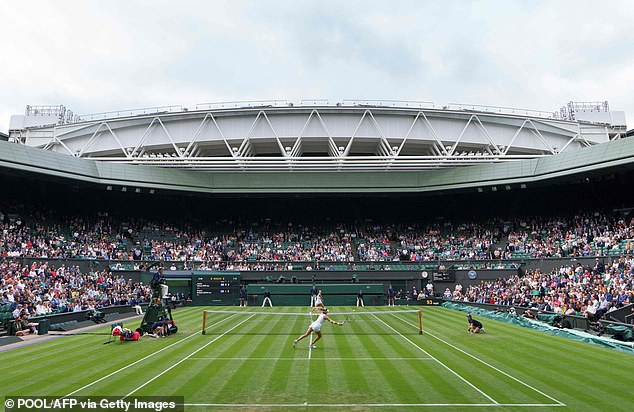 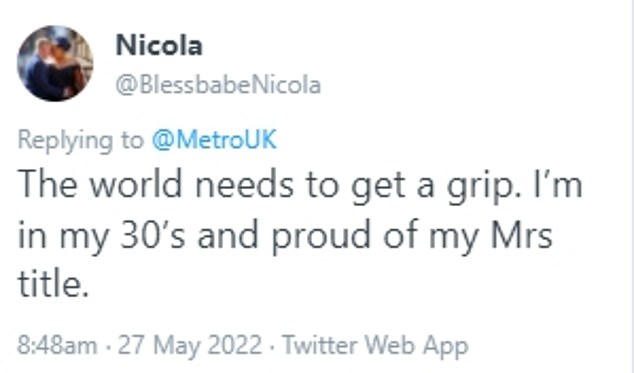 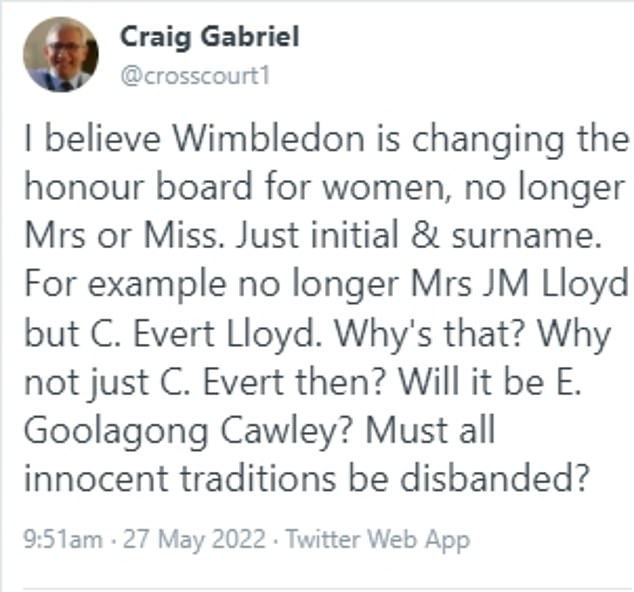 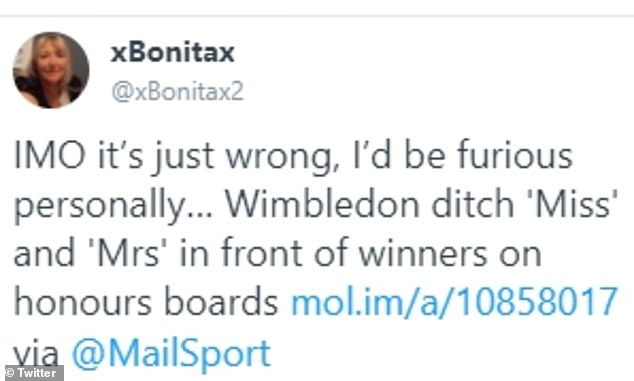 Dozens of women reacted with shock online, pointing to the fact they were proud of their title and would be disappointed to have it ignored

From the inaugural women’s Wimbledon tournament in 1884, the female winner has had her title-first-name initial-surname on the board, with last year’s winner Ashleigh Barty reading ‘Miss A Barty.’

Yet the men’s winner, Novak Djokovic, was just N Djokovic and having dropped using ‘Miss’ and ‘Mrs’ when umpires announced the names of female players during matches in 2019, the AELTC have modernised further by updating the honours boards so the women’s names also now go by first-name initial, then surname.

The report in The Times states that Wimbledon insiders have agreed to the honours board change ‘to move with the times and the use of titles had become an anachronism in an age of increasing equality.’

The process of married women taking the initials and surnames of their husbands will also be updated. 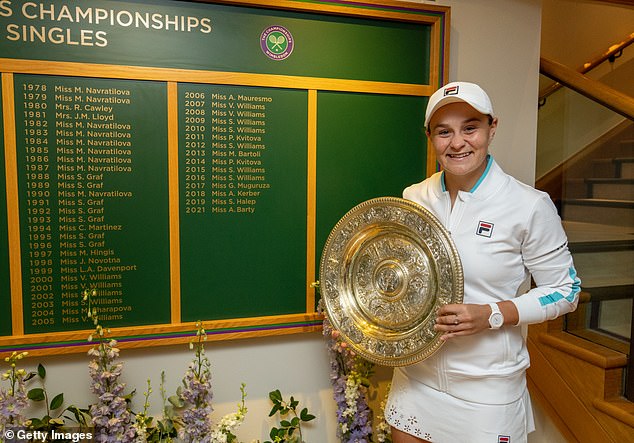 From the inaugural women’s Wimbledon tournament in 1884, the female winner has had her title-first-name initial-surname on the board, with last year’s winner Ashleigh Barty (pictured) reading ‘Miss A Barty’ 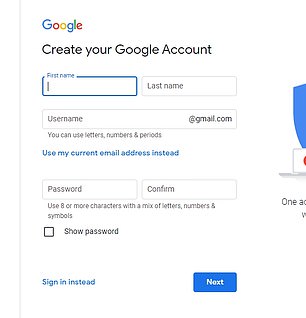 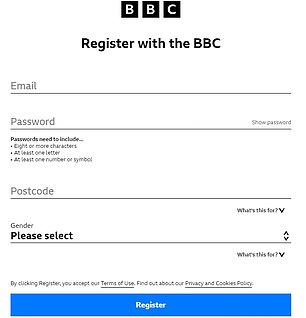 The debate intensified as it was revealed there was no option to choose a title when setting up new accounts with Google, the BBC or when editing a profile on the official Gov.uk website

For example, Chris Evert’s 1981 title triumph will be changed from ‘Mrs J M Lloyd’ – a result of her marriage to John Lloyd – to ‘C Evert Lloyd.’

However, the tournament will continue to label the events as Gentlemen’s and  Ladies, as opposed to the man’s and the ladies.

Stella Sutcliffe, Founder of GoTitleFree campaign which calls on organisations to scrap all marital titles, praised the move.

She told MailOnline: ‘We celebrate every organisation which allows a person to be their authentic selves.

‘Many women no longer want to be defined by their attachment or unattachment to a man, and titles for women often create assumptions around age and sexuality as well as marital availability.

‘Marital status titles are not a part of a person’s legal identity. The drop-down lists we are so often asked to complete do not give everybody the freedom they need to choose an identity option which truly represents them, and expanding the list has only created more confusion and division.

‘We think that offering the option to only provide a first name and a surname will help women and non-binary people to be free from categorisation, and would create a more equal society.

The titles ‘Ms’, ‘Mrs’ and ‘Miss’ were all abbreviations of Mistress, before being used to showcase a woman’s marital status from the early 20th century.

Miss and Mrs were previously used to distinguish a woman’s age, with the former being used for girls under a certain age, and the latter referring to women of status.

However, in the 1900s, an emphasis on marital status appeared and Ms was introduced shortly after as a solution to the problem of not knowing whether a woman was married.

Six-time winner Novak Djokovic, speaking after Wimbledon changed the ‘Miss’ and ‘Mrs’ rules when announcing the names of players during matches in 2019, said he was ‘quite surprised’ by the change.

‘I thought that tradition was very unique and very special; I thought it was nice,’ he said three years ago.

‘It’s definitely not easy to alter or change any traditions here that have been present for many years. It’s quite surprising that they’ve done that.’

The row over gender-specific terminology has spread far and wide in recent years.

Holiday firm TUI told pilots and cabin crew to no longer address passengers as ‘ladies and gentlemen’ in favour of more gender-neutral terms.

Critics labelled fellow carrier British Airways as ‘woke’ after it made a similar move in in October last year.

And leading law firm Withers LLP urged its lawyers to stop using the traditional ‘Dear Sir/Madam’ introduction when writing letters in a bid to be more ‘gender neutral’.

The developments come after a teacher training session recommended school pupils scrap gendered titles such as ‘Mr and Mrs’ when addressing tutors.

In a webinar funded by the National Education Union (NEU), Dr Elly Barnes called for ‘male and female’ categories to be removed from school application forms and suggested uniforms could be ‘gender-free’.

Dr Barnes, who is chief executive of charity Educate and Celebrate, insisted that the gender-free model was a success in many of the schools her charity worked with.

One attendee questioned whether the phraseology would affect terms such as ‘Sir’ or ‘Miss’, which pupils often to use to get the attention of their teachers.

A female teacher, who wished to remain anonymous, branded the session as ‘propaganda for trans activists’ and told The Telegraph she thought it was against the Department for Education (DfE) guidelines.

She said: ‘Teachers will take what this woman says as fact because the training was organised by the NEU and they’re not going to question their union.

‘They’re trying to erase us by taking away our language, saying we should avoid words like mother and we’re paying for it essentially.’