That would be a Marvel! Fictional nation of Wakanda from Black Panther is listed as a US trading partner on Department of Agriculture website in bizarre gaffe

The fictional country of Wakanda appeared on a list of US trading partners in a bizarre gaffe by agriculture officials.

Wakanda, a made-up African nation from Marvel superhero movies including Black Panther, appeared in a drop-down list on the Department of Agriculture website.

It was also listed in a table of tariff codes, which suggested that Wakanda was trading with America in markets including dairy, tobacco and alcohol.

Today the department removed Wakanda from its online list, saying it was a mistake. 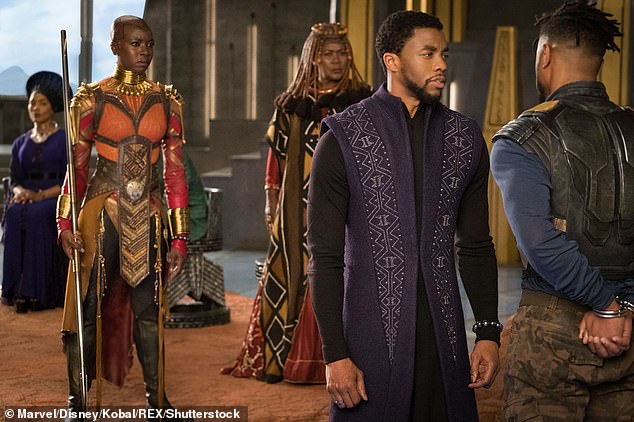 The fictional country of Wakanda, a made-up African nation from the universe of Marvel superheroes (pictured: the movie Black Panther), appeared on a list of US trading partners

A spokesman told the Washington Post that the inclusion of Wakanda was an error made as part of a test officials were running.

Wakanda’s listing was first noticed by New York-based software engineer Francis Tseng, who was looking for data for a fellowship he is pursuing.

The country appeared in a list of free trade partners which also included Colombia, Costa Rica and Peru.

Tseng also downloaded a list of tariff codes for of goods traded between Wakanda and the U.S. including live animals, dairy goods, tobacco and alcohol.

‘I was very confused at first and thought I misremembered the country from the movie and got it confused with something else,’ Tseng said.

After the list was corrected, Tseng quipped: ‘Well, the USDA took Wakanda off the list. Guess we’re in a trade war with them too.’

He also joked on Twitter: ‘The US would no doubt try to liberalize Wakanda’s markets and flood it with cheap subsidized corn.’ 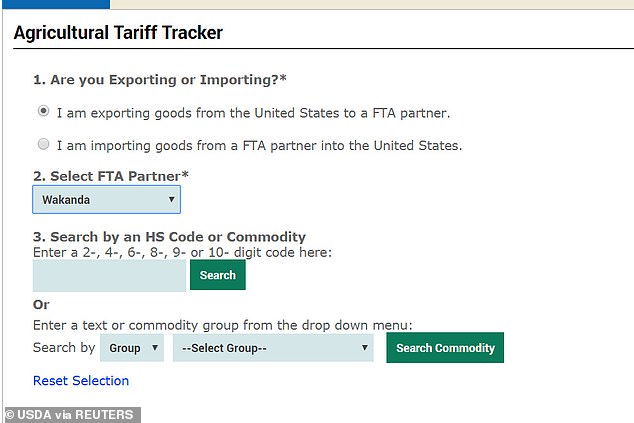 The fictional country of Wakanda appeared in a drop-down list on the Department of Agriculture website alongside countries such as Colombia, Costa Rica and Peru

Wakanda was also listed in a table of tariff codes, which suggested that Wakanda was trading with America in markets including dairy, tobacco and alcohol

The Kingdom of Wakanda is the home of Black Panther, the Marvel superhero, and is portrayed in comic books and the 2018 blockbuster as an isolated African nation with the most powerful technology on the planet.

There was no USDA entry for vibranium, the fictional metal from space that is the source of Wakanda’s power.

The Black Panther movie, released in February 2018, went on to become the first superhero movie to win an Oscar nomination for Best Picture.

Directed by Ryan Coogler, it was 2018’s top-grossing movie in the United States and Canada, and second-highest worldwide, with $1.3billion in ticket sales.

Released by Disney-owned Marvel, it was also the first superhero film to feature a predominantly black cast.

The country of Wakanda also appears in other Marvel Cinematic Universe productions including this year’s finale, Avengers: Endgame.