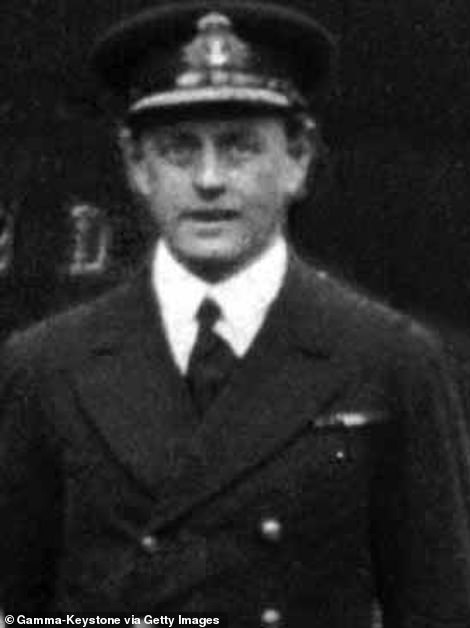 The First World War would have ended two days earlier had the Germans not been so disorganised, a newly-discovered account by a British serviceman reveals.

Captain Jack Marriott was one of four British participants in the Armistice negotiations and kept notes of the historic meetings in November 1918 after the agreement was signed in French dining car 2419D in the Rethondes.

In one extraordinary passage he recounts how the terms of the peace treaty were meant to have been sent by telegram to the German high command, but their delegation forgot to bring the code to enable this.

So the papers had to be driven from the front line to the German HQ in Spa, Belgium, delaying the signing by 60 hours.

In his memoirs Capt Marriott also described seeing a distraught German officer clenching two bottles of beer and ‘crying his eyes out’ during the negotiations.

And the momentous news almost didn’t reach King George V as Capt Marriott had to try 30 times to get through to Buckingham Palace due to a bad line.

After the Armistice was finally signed in a forest setting outside Paris, the British delegation celebrated in remarkably understated fashion.

Capt Marriott wrote: ‘We had a glass of port and went for a walk in the forest which was wonderfully soothing after our busy night.’

The fascinating revelations feature in his memoirs which have emerged for sale for £15,000 with London auctioneers Christie’s. 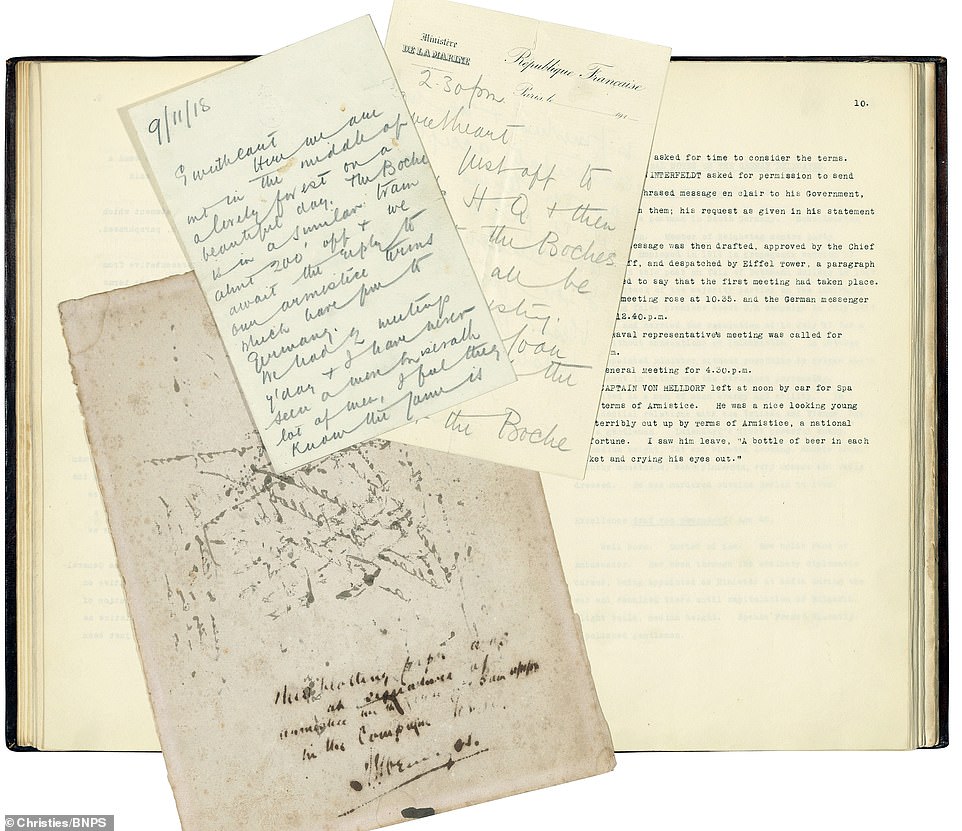 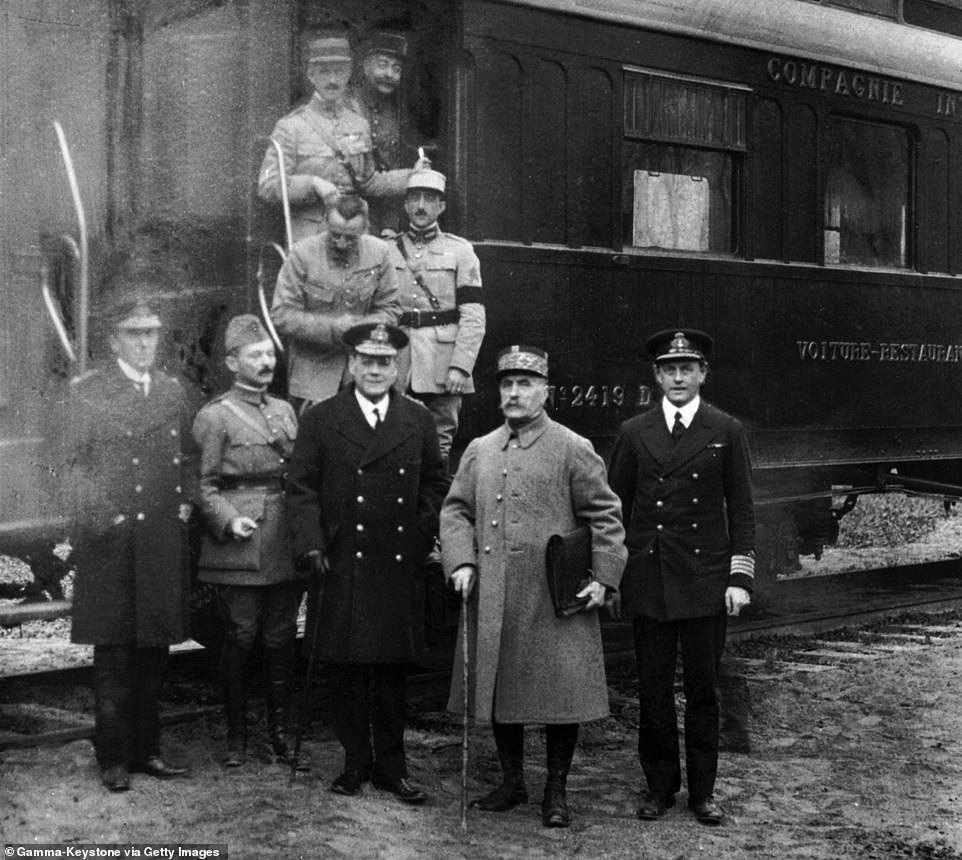 Pictured: General Ferdinand Foch (with the briefcase and walking stick) stands beside commander-in-chief of the Allied forces, Admiral Rosslyn Wemyss (on his right) of the Royal Navy and chief-of-staff of the French Army General Maxime Weygand (second from the left) alight Night Train Company wagon 2419D at Rethondes in the Oise, France, on November 11 1918. Captain Jack Marriott is pictured on the far right 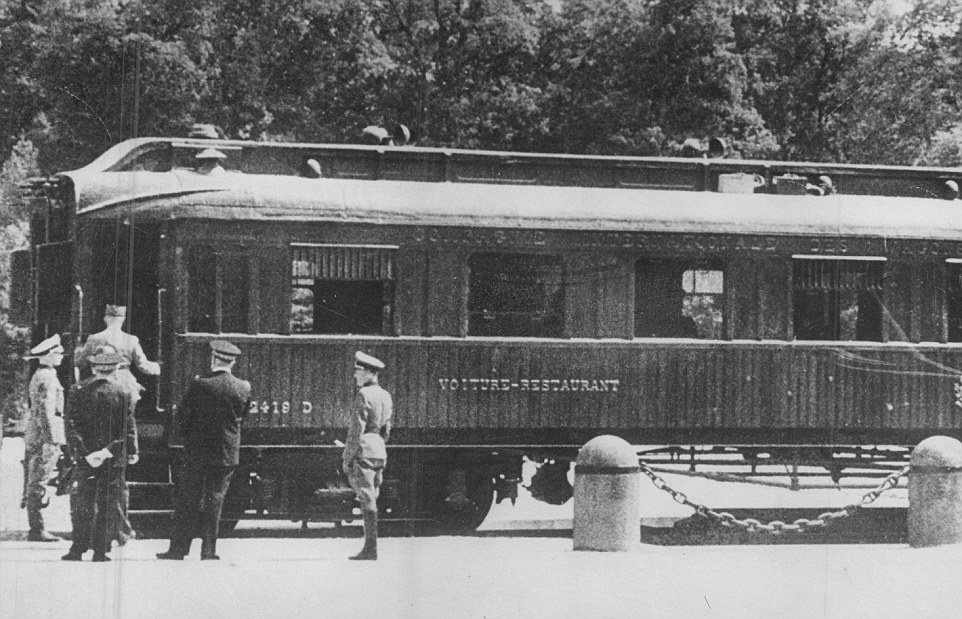 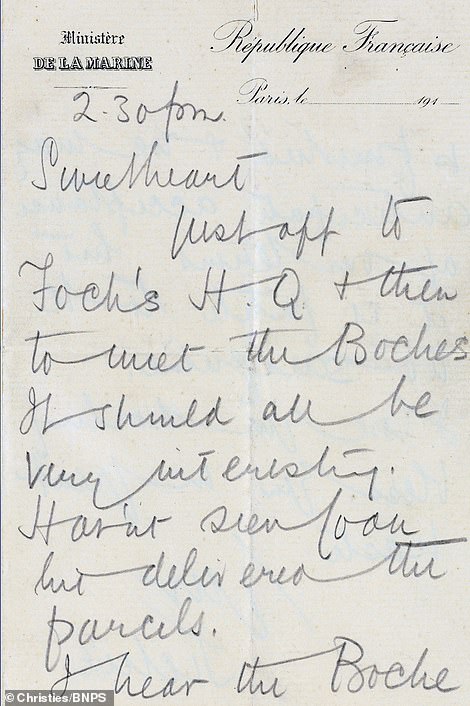 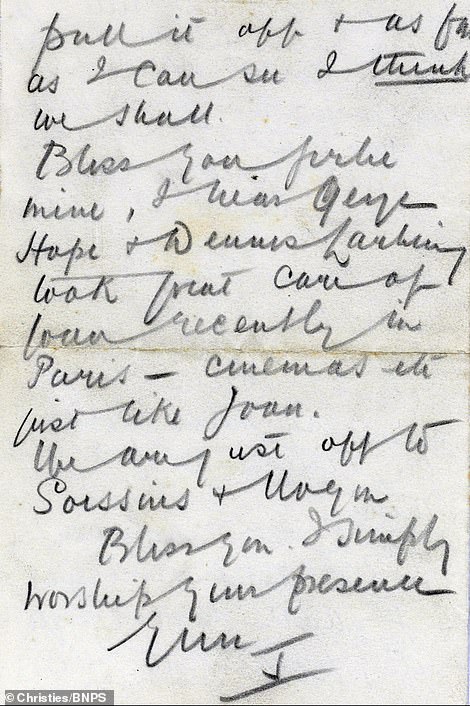 This fascinating extract mentions meeting with Ferdinand Foch and references the Boche, which was a derogatory term for the Germans that was used among the Allied Forces during the conflict

In one extract, dated Saturday, November 9, 1918, the naval officer described the defeated German delegation as being a ‘miserable lot of men.’

He wrote: ‘Here we are out in the middle of a lovely forest on a beautiful day. The Boche is in a similar train about 200 off & we await the reply to our armistice terms which have gone to Germany.’ 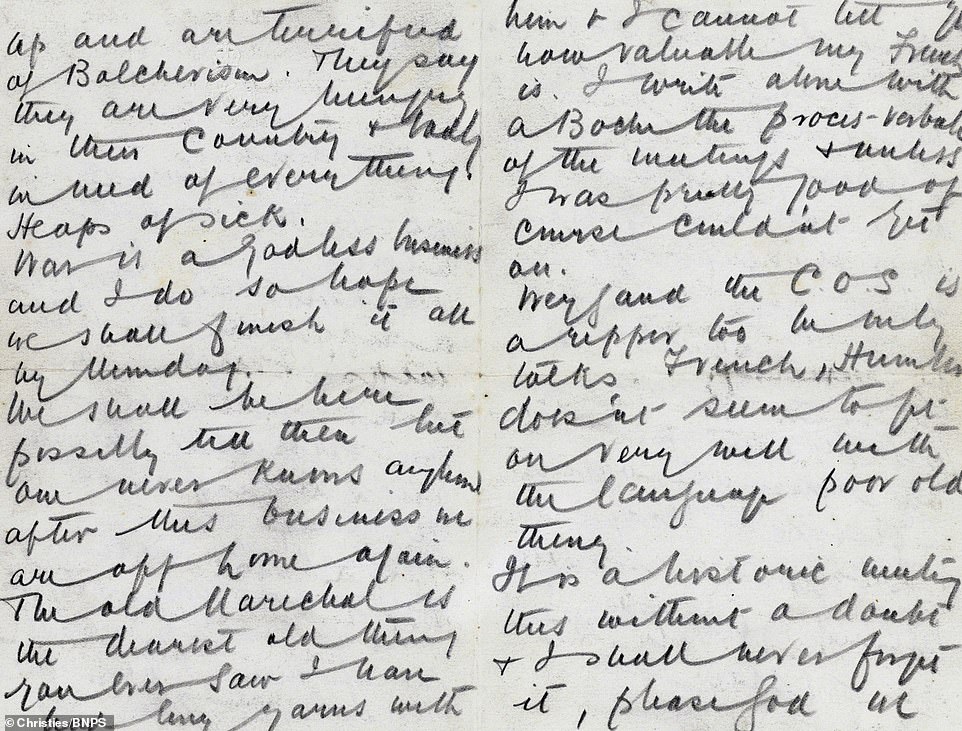 The memoirs offers first-hand insight into the signing of the Armistice agreement and the chaos that surround the end of the First World War. In one extract the officer recalls seeing a German solider crying his eyes out while he clutches two bottles of beer as the conflict descended into desperation

‘We had 2 meetings y[ester]day & I have never seen a more miserable lot of men, I feel they know the game is up and are terrified of Bolchevism [sic].

‘They say they are very hungry in their country & badly in need of everything. War is a Godless business and I do so hope we shall finish it all by Monday.’

Documenting the delay in the signing, Capt Marriott added: ‘(Count Alfred Graf von) Oberndorf (of the German foreign ministry) asked for permission to be put in touch with a W/T station, so that he might remit the terms to the German Government and the high command.

‘The Marechal (Ferdinand Foch) said the message could be sent in cypher only – the Germans said they had not brought a cypher.’

As a result, the young German officer Captain Von Heldorf was sent off by car at noon on November 8 to Spa in Belgium where the German high command were based to hand deliver the terms of Armistice.

Capt Marriott wrote: ‘Captain Von Heldorf left at noon by car for Spa with terms of Armistice. He was a nice looking young man terribly cut up by Terms of Armistice, a national misfortune. I saw him leave a bottle of beer in each pocket and crying his eyes out.’

Two days of impasse followed until he finally returned with the signed terms at midnight on November 10. Capt Marriott added: ‘On November 9th, we had a quiet day and did not see the Germans, so took a car and went to the front. 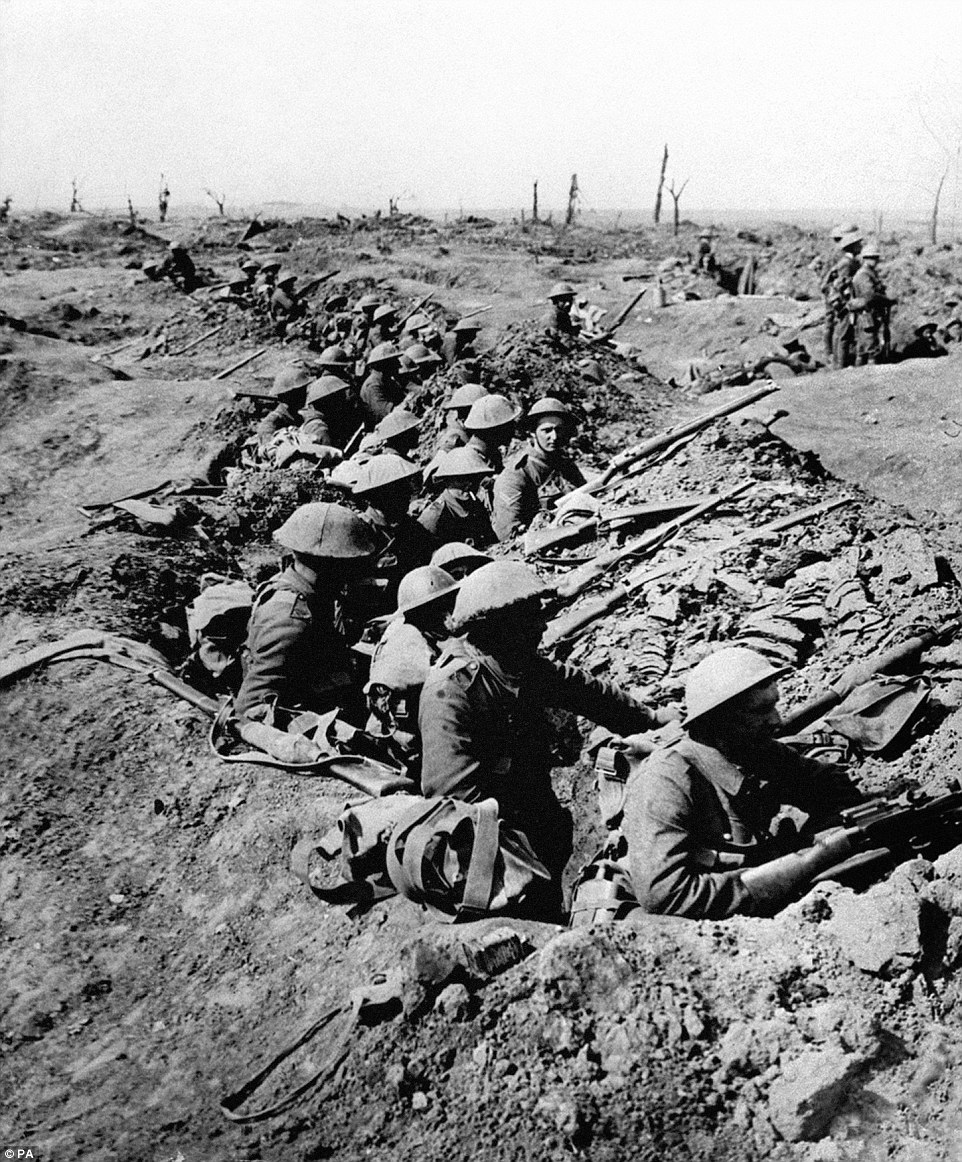 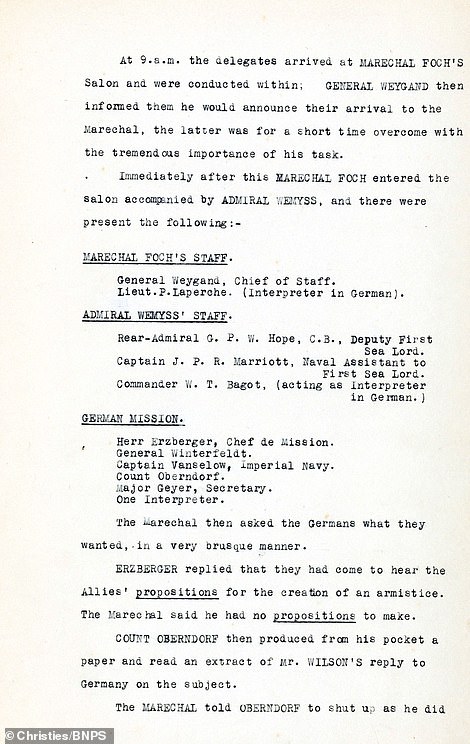 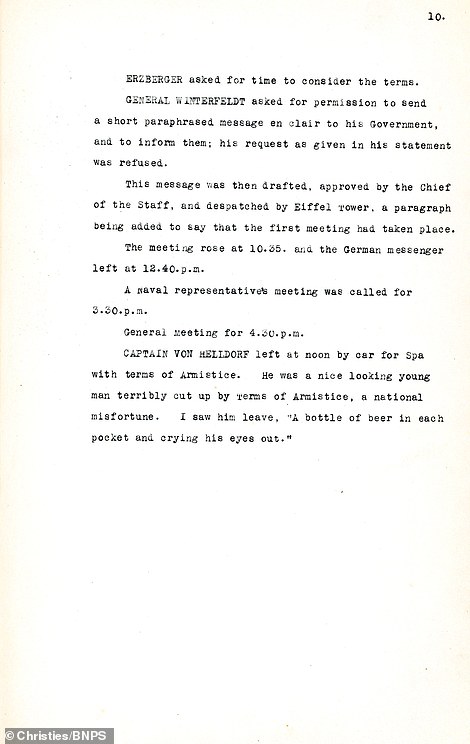 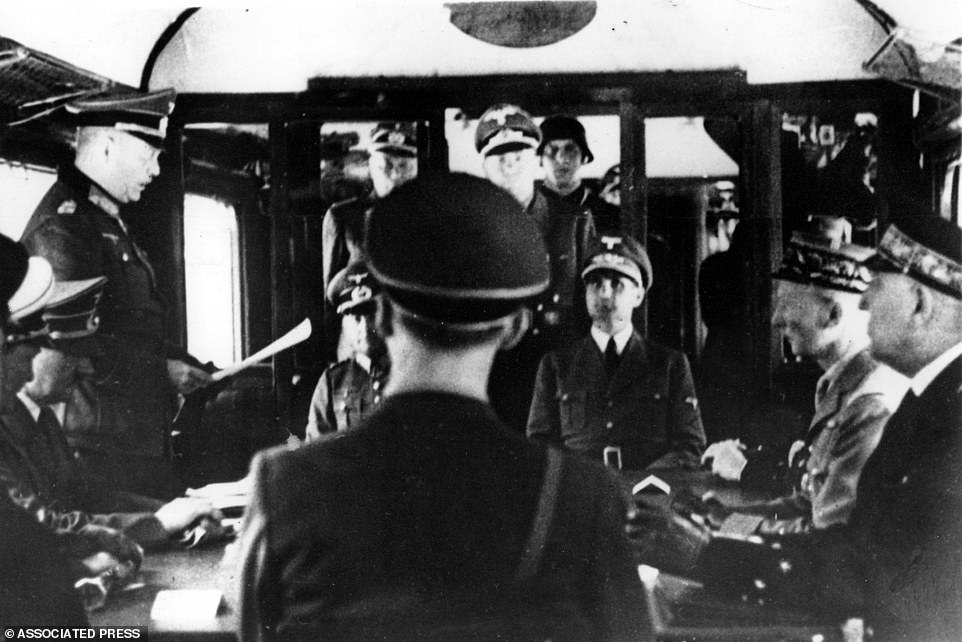 Adolf Hitler (left, sitting down) was so incensed by the Armistice agreement of the First World War that he made the French sign surrender documents in the same carriage in which peace had been secured

‘[Sunday, November 10th]. All day we had been expecting news of a final meeting, and though the Germans had till Monday, 11th November at 11am to give an answer, we expected it sooner.

‘At midnight General (Maxime) Weygand (the French commander) came to my room and said the Germans had had their answer and Maréchal Foch had summoned a full meeting at 2.15am next morning.’

French general Marshal Ferdinand Foch, British representative Admiral Rosslyn Wemyss and the four German delegates signed the document which declared an end to the war at 5am on November 11. The guns fell silent exactly six hours later, at 11am on the eleventh day of the eleventh month of 1918. 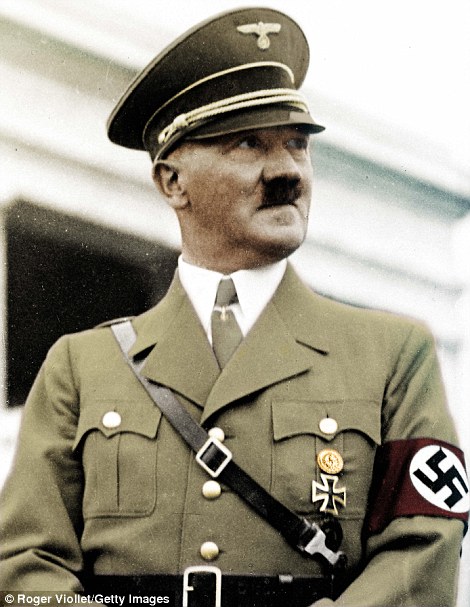 However, when Capt Marriott tried to phone Buckingham Palace to inform King George V about the Armistice, he was almost defeated by the primitive telephone technology. Recalling the frustrating episode, he wrote: ‘The line was dreadful and I must have been cut off about 30 times.’

The 37-page memoirs, which were typed up after the war, has been passed down Capt Marriott’s family for several generations. They are now owned by a private collector who is selling them at auction.

Thomas Venning, specialist at Christie’s, said: ‘It is extraordinary to get descriptions of the events in the railway carriage in Compiègne Forest by one of only four British participants.

‘Capt Marriott’s letters give a remarkably vivid account of the atmosphere and personalities of the Armistice negotiations.

‘It appears there was a day when everyone was sat around doing nothing as they waited for the terms to be taken to Spa and brought back to the forest. Potentially the Armistice could have been signed two days earlier.’ The sale takes place on December 12.

The story of dining car 2419D didn’t end with the First World War. Hitler tried literally to rewrite history in 1940 when the Nazi leader commandeered the dining coach to serve France the same humiliation Germany suffered there on the last day of World War I.

The coach became a rallying cry during Hitler’s ascent to power as he exploited the German public’s contempt for the punitive terms of surrender.

The Nazi leader visited the site in 1940 when his armies conquered France. The Fuhrer ordered the dining car brought out of the memorial and returned to the tracks in the spot in the forest it occupied in 1918.

What ensued was Hitler’s surreal theatrical restaging of the 1918 armistice, one of history’s most famous events, with the tables turned. The 1940 Armistice was dictated in that train – with Germany the victor and France the loser.