She was a political trailblazer long before the names Barack Obama and Hillary Clinton were memorialised for smashing barriers in their journeys to the highest office in the US.

Yet Shirley Chisholm, the first black woman ever to run for president, has remained largely ignored by history – until now.

As viewers of the hit BBC mini-series Mrs America will know, Shirley’s story is one of those brought to life in this razor-sharp portrayal of the women’s movement in 1970s America.

Starring Cate Blanchett as conservative campaigner Phyllis Schlafly, it shows the battle lines drawn between the nation’s traditionalists and the women’s libbers, led by Gloria Steinem (Rose Byrne) and Betty Friedan (Tracey Ullman), over the campaign to secure ratification of the Equal Rights Amendment to guarantee equal rights for all US citizens regardless of sex. 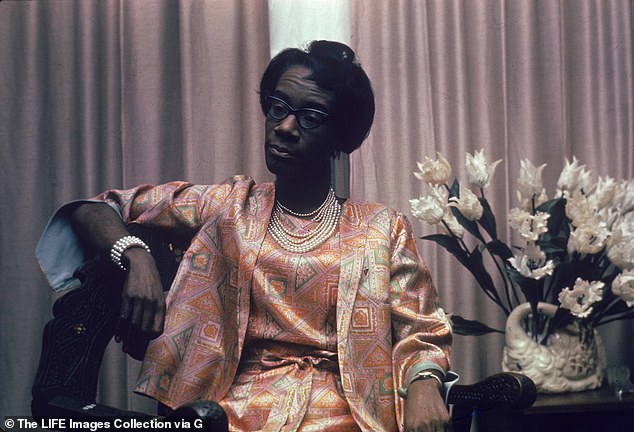 Shirley Chisholm (pictured in 1968), the first black woman ever to run for president, has remained largely ignored by history – until now

But amid the powerhouse performances it is the role of Chisholm, played by Uzo Aduba, who steals the show as a tough, no-nonsense politician half-a-century ahead of her time.

Clad in her trademark outfits of bright colours and bold prints – chosen, said Chisholm, so that ‘people will look at me and not through me’ – it brings to life both Chisholm’s gift for oratory and her determination to smash down barriers not with force but with charm and steely determination.

As she once memorably put it: ‘If they don’t give you a seat at the table, bring in a folding chair.’

A source involved in the production told The Mail on Sunday: ‘For years her voice has been silenced but now the TV show and movie is making her voice heard. 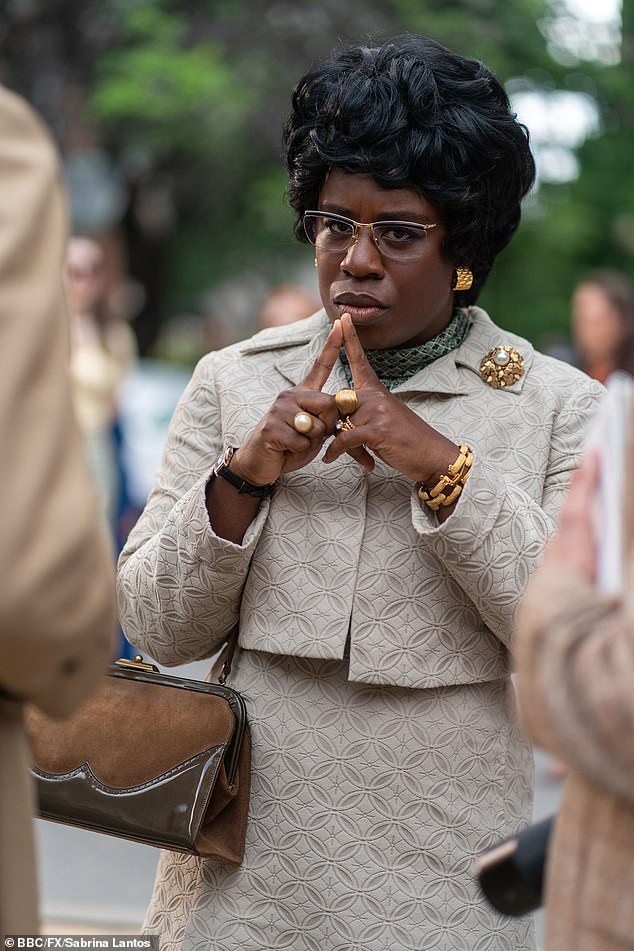 Amid the powerhouse performances it is the role of Chisholm, played by Uzo Aduba, who steals the show as a tough, no-nonsense politician half-a-century ahead of her time

‘She was someone who fought hard but whose message was always about unity. We need to hear her voice now more than ever.’

Chisholm’s incredible journey was certainly one that, at first glance at least, unfolded against the odds.

Born in Brooklyn, New York, in 1924, Chisholm was the oldest of four daughters of her immigrant parents Charles St. Hill, a factory worker from Guyana, and Ruby Seale St. Hill, a seamstress from Barbados.

Money was so tight that when Shirley was five she and her two younger sisters were sent to live with her maternal grandmother Emaline in Barbados – a move that would prove to be transformative.

‘Granny gave me strength, dignity and love,’ she later recalled. ‘I learned from an early age that I was somebody.’

She also credited the British-based education system in Barbados with giving her the best start in life.

‘Years later I would know what an important gift my parents had given me by seeing to it that I had my early education in the strict, traditional, British-style schools of Barbados.

‘If I speak and write easily now, that early education is the main reason,’ she wrote in her 1970 autobiography. 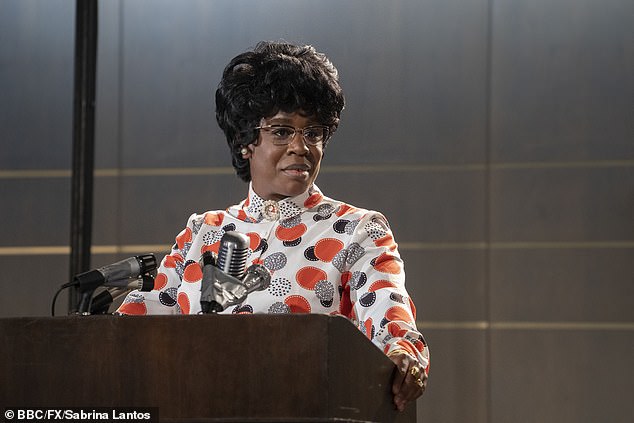 The first US politician to employ a ‘battle bus’, an undaunted Chisholm drove through impoverished areas (pictured, Ms Aduba)

Chisholm returned to the US as a teenager, in 1946 graduating with distinction from Brooklyn College – having won prizes on the debating team.

Whenever Chisholm was told by college professors that her gift for rhetoric would prove ideal for a career in politics, she had the same reply: as both black and female she faced a ‘double handicap’.

Few could argue with her logic: this was 1940s America, a place where segregation laws still ruled supreme. It would be nearly two decades before those laws were overturned.

She initially worked as a nursery teacher, yet her activist instinct was already well honed, and by 1964 she was elected a member of the New York State Assembly, becoming the second African American in the legislature.

Four years later, she became America’s first black Congresswoman, in the year that Martin Luther King was assassinated – an event Chisholm would describe as ‘an earth-shattering moment which made me even more determined to use my voice’. 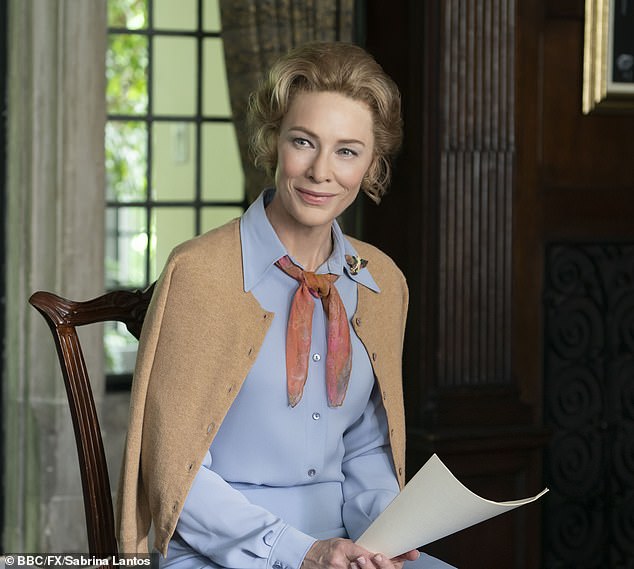 Chisholm always sought to persuade rather than to browbeat her critics. When she was attacked by her (mostly white, male) opponents, she replied: ‘You don’t make progress by standing on the sidelines, whimpering and complaining. You make progress by implementing ideas.’

In 1972, she moved even further from the sidelines when she announced she was running against firm favourite George McGovern to be the Democratic nominee for president (against incumbent Richard Nixon) – a declaration that, as Robert Gottlieb, a lawyer who worked for her campaign, recalls, was at the time akin to ‘having someone from Mars run’.

Yet racism was undeniably rife: Chisholm received countless death threats and her campaign posters were daubed with racial slurs, something brought brutally home in North Carolina, their first stop on the campaign. 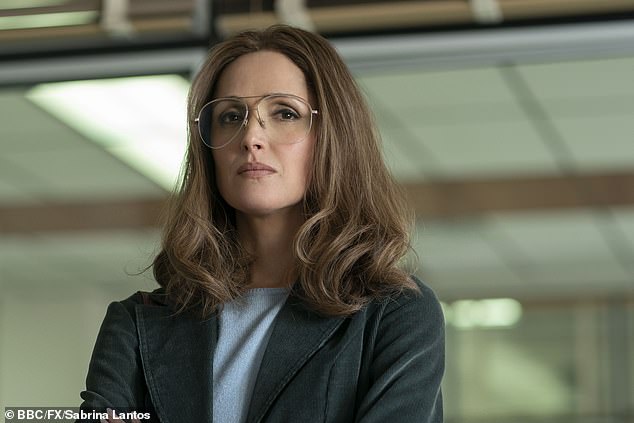 The women’s libbers are led by Gloria Steinem (Rose Byrne, pictured) and Betty Friedan (Tracey Ullman), over the campaign to secure ratification of the Equal Rights Amendment

Gottlieb recalls picking up a box containing brochures from the luggage carousel to find a bumper sticker scrawled with the words ‘Go home n******’. ‘That’s how the campaign began,’ he recalls.

The first US politician to employ a ‘battle bus’, an undaunted Chisholm drove through impoverished areas with a microphone bellowing: ‘Ladies and gentlemen, this is fighting Shirley Chisholm coming through.’

She was at pains, too, to emphasise that she did not want to be seen as a minority candidate. ‘I am not the candidate of black America, although I am black and proud,’ she told the Democratic convention.

Yet history wasn’t ready for her. While Chisholm earned a respectable ten per cent of the vote, many black male politicians and feminists such as Steinem abandoned her, preferring instead to back the ‘electable’ McGovern – who would go on to lose to Nixon in a landslide. 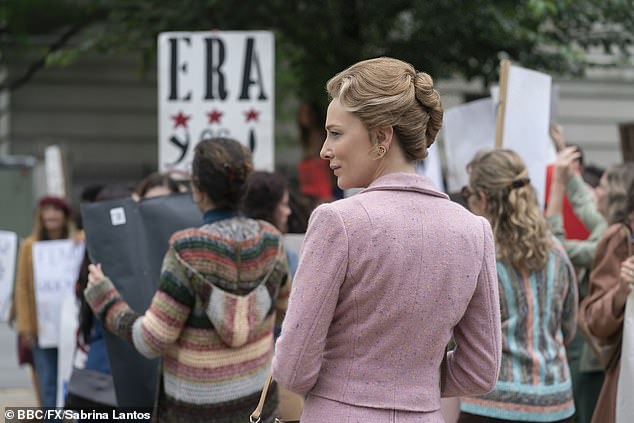 Chisholm was devastated by what she saw as their betrayal, although according to her biographer, Anastasia Curwood, she had always known her journey had limits.

‘She was realistic about her chances and winning wasn’t necessarily her goal. She ran to win but she knew she wouldn’t win. She paved the way,’ says Curwood.

Chisholm, who married twice but never had children, continued in politics until she retired from Congress in 1983.

She passed away in 2005 at the age of 80, four years before Barack Obama made history by becoming the first African-American to be elected president.

The inscription on her headstone reads: ‘Unbought and unbossed.’ Her pioneering work has, until now, been largely unacknowledged by those who have come after her.

Zinga Fraser, director of Women’s Activism at Brooklyn College, points out that, ‘Hillary Clinton did not credit her during her campaign. Neither did Barack Obama.’

Now Chisholm is finally getting the recognition she deserves. Later this year a statue will be unveiled in her honour in Brooklyn, with plans for another monument in Washington, while last year it was announced that Oscar-winning actress Viola Davis will play her in biopic The Fighting Shirley Chisholm.

Chisholm, surely, would have been dismayed that America has yet to elect its first female president – though Joe Biden, the Democratic nominee in this November’s US elections, has promised to choose a black woman as his running mate.

Among the favourites to be chosen is Californian Senator Kamala Harris, who earlier this year made a point of choosing a red and yellow design – two of Chisholm’s trademark colours – when she unsuccessfully ran for the Democratic nomination.

‘She paved the way for me and countless other woman in politics’, says Harris. ‘Shirley’s activism and advocacy makes her a role model for women everywhere.’