The first vision of hit-run driver Puneet Puneet have been released after he was remanded in police custody in India for killing a young student in Melbourne 13 years ago.

Puneet was a 19-year-old learner driver behind the wheel of a V6 Commodore when he lost control and hit students Dean Hofstee and Clancy Coker in Southbank, Melbourne, in 2008. Mr Hofstee was killed and his friend was severely injured. 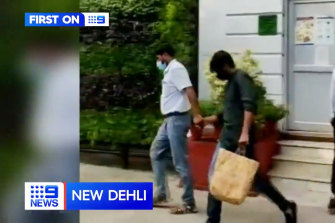 In video obtained by Nine News, Puneet was seen leaving a New Delhi courtroom with officers by his side and his parents following closely behind.

Wearing a green long-sleeved shirt, jeans and carrying a brown paper bag, it is the first time the man has been seen since he surrendered himself to police on Friday.

Victoria Police said Puneet was expected to appear in court on Friday, September 10.

Puneet pleaded guilty to culpable driving in Victoria and was awaiting sentencing in 2009 when he absconded on a passport borrowed from a friend.

He was arrested in India in 2013 – on his wedding day – and has since faced protracted extradition hearings to determine if he should be sent back to Melbourne.

Last year, the Victorian government sought help from the federal government after reports Puneet had gone missing in India ahead of his expected extradition to Australia.

“While the extradition process continues, Victoria Police will not make any further comment,” the spokeswoman said.

A Victorian government spokesperson said the state would continue to work closely with the Commonwealth and relevant authorities to ensure Puneet was extradited to Victoria as quickly as possible.

“Mr Puneet needs to return to Victoria to face the consequences of his actions and we won’t rest until justice is served,” the spokesperson said.

Premier Daniel Andrews, asked about the arrest during a press conference on Friday, said the “cowardly” way that he avoided justice was appalling.

“Hopefully him coming back into custody back in India takes us a step closer to him serving time,” Mr Andrews said.

Puneet fled the scene of the 2008 crash but was later caught and found to have a blood-alcohol reading of 0.165. Police estimate he was driving at 150 km/h at the time of the crash. Puneet claimed he was not driving that fast and had swerved to avoid a cat.