Singapore: For nearly six months, Sean Turnell has been locked up inside one of south-east Asia’s most notorious jails.

Now, with COVID-19 reportedly rife inside Yangon’s Insein Prison, the first images of the Australian economist since he was detained have been released. 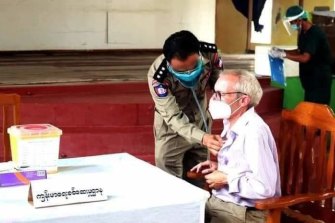 An image of Sean Turnell published in state media on Thursday.Credit:Global New Light of Myanmar

Turnell was not named in the newspaper but the pictures appeared alongside an article announcing that the vaccination program had begun at the infamous prison, as 610 of the 9000 inmates received shots on the first day.

“This is the first COVID-19 vaccination of prisoners at the prison,” a prison officer was quoted as saying by the junta-aligned publication.

It claimed there was no outbreak of the virus at the jail but lawyers for prisoners said last week at least 48 inmates there had been infected including a detained American journalist. U Nyan Win, who was a senior figure in Suu Kyi’s National League for Democracy party and her former lawyer, died of COVID-19 last week after being held for months at Insein before being transferred to hospital. 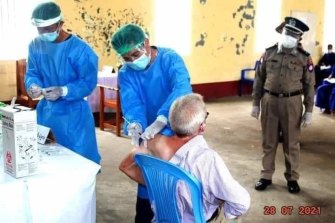 Turnell receives a shot of the vaccine at Insein Prison, according to a military-run newspaper.Credit:Global New Light of Myanmar

The prevalence of the virus led inmates to stage a protest last Friday and has prompted Turnell’s wife in Sydney, Ha Vu, to plead again with military leaders in Myanmar to release him and or at least transfer him to house arrest for his health, saying he had been experiencing cold and flu symptoms.

Turnell has been held since February 6, five days after senior generals ousted Suu Kyi’s newly elected government in a coup and embarked on a bloody crackdown against pro-democracy demonstrators.

He has been accused of a breach of the colonial-era Burmese Official Secrets Act, as has Suu Kyi, who was arrested on the morning of the coup and after months under house arrest has been held lately in an undisclosed location in the capital Naypyidaw.

“Sean’s lawyers said that the prosecution needs him for the OSA case against ASSK, so it better do all it can to keep him alive,” his wife wrote on Facebook last week.

The Australian government has also called in Myanmar’s ambassador again to urge Turnell’s release. Foreign Minister Marise Payne has said Canberra regards his jailing as a case of a arbitrary detention.

The Department of Foreign Affairs and Trade was contacted on Thursday.

The brand of vaccine administered at the prison was not mentioned by the state newspaper but Myanmar has purchased doses from China and Russia as well as shipments of AstraZeneca.

The development was part of a drive to inoculate 40,000 inmates in densely packed prisons which have seen virus outbreaks, state-run MRTV reported.

Outside their walls, COVID-19 has compounded the chaotic post-coup landscape in which protesters continue to be killed and conflict has re-emerged between the military and ethnic forces.

infections in Myanmar have surged since June, with 4980 cases and 365 deaths reported on Wednesday, according to health ministry data cited in media. Medics and funeral services put the toll much higher.

Junta leader Senior General Min Aung Hlaing called in a speech for more international cooperation on prevention, control and treatment of COVID-19, including with fellow members of regional bloc ASEAN and “friendly countries”.

According to state media, he said vaccinations needed to be increased, through both donated doses and by developing domestic production, aided by Russia.

Myanmar recently received two million more Chinese vaccines but it was believed to have only vaccinated about 3.2 per cent of its population, according to a Reuters tracker.

There have been desperate efforts by people to find oxygen in many parts of the country. News site Myanmar Now reported at least eight people died in a Yangon hospital at the weekend after a piped oxygen system failed.