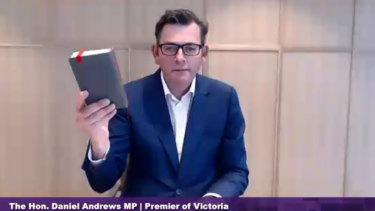 1. Who was in charge of hotel quarantine?

The Health Minister, says Premier Daniel Andrews. In his witness statement, the Premier wrote that the operation began as a "multi-agency operation, overseen and co-ordinated by the State Control Centre".

"The Department of Health and Human Services (DHHS), as the designated control agency was primarily responsible for the program," he wrote.

He said Health Minister Jenny Mikakos and Jobs Minister Martin Pakula were responsible for informing cabinet about the hotels program.

"I then regarded Minister Mikakos as accountable for the program," he wrote.

It was the question on everyone's lips: Who made the decision to engage private security?

Counsel assisting Rachael Ellyard asked the Premier: "Do you know who it was?"

Mr Andrews responded: "No, I don't … that's why I set up this [inquiry] … to get exactly that answer and quite a few others, Ms Ellyard."

Ms Ellyard: "Because we really should know, shouldn't we? We should be able to say who made the decision to not only spend that much money but to give such an important function in this infection-control program?"

Mr Andrews: "Yes, it's one of a number of very important questions."

3. Were troops on offer?

Mr Andrews said he was never told about a Commonwealth offer to provide ADF personnel to assist with security at quarantine hotels.

The inquiry heard the Premier only laid eyes on an April 8 email from the Department of Prime Minister and Cabinet to his own state secretary that offered ADF personnel while preparing for his appearance at the inquiry.

"Given that it's so at odds with what I took away from the national cabinet meeting, I think it would have been very significant to me and I can't predict what outcome it would have had … ," Mr Andrews said.

4. A case of jobs versus health?

The inquiry heard the hotel quarantine program served the dual purpose of supporting the economy by providing jobs and protecting the community from infected travellers.

But Mr Andrews refused to accept the proposition that the economic benefits and protection of the community were of equal weight in the decision to roll out hotel quarantine.

Ms Ellyard: "You wouldn't accept the proposition that they were of equal weight, the protection and the economic support?"

The Premier was asked how he felt about his ministers taking responsibility, or lack thereof, for their actions.

"There shouldn't be any degree of confusion about this, should there? Either at the ministerial or secretary level or all the way down to the front desk at the hotel?" Ms Ellyard said.

"There should be none," the Premier said.