Search and rescue operations under way after F/A-18 fighter jet and a KC-130 refueling aircraft collided near Hiroshima. 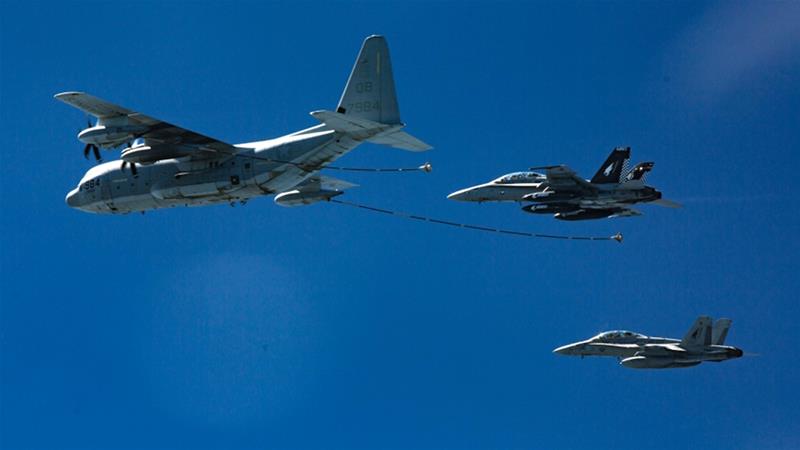 Five US Marines went missing after a refuelling plane and a fighter jet collided midair and crashed into the sea off Japan’s southwestern coast on Thursday, Japanese and American officials said.

Japan’s defence ministry said on Thursday its maritime forces had so far found two of the seven Marines who were on board the aircraft – an F/A-18 Hornet fighter jet and a KC-130 Hercules – at the time of the incident.

One was in a stable condition at Marine Corps Air Station Iwakuni, while the second had been found about 10 hours after the collision and brought on board a Japanese military vessel, the ministry said. No other details about the second Marine were known, a ministry spokesman said.

The Marine Corps said in a statement the incident occurred around 2am local time (17:00 GMT Wednesday) about 320km off the Japanese coast.

Japanese state broadcaster NHK reported that six helicopters and three vessels from the self-defence forces are involved in the search and rescue operations.

Defence Minister Takeshi Iwaya said Japan is working with the US to collect and share information about the crash.

“The incident is regrettable, but our focus at the moment is on search and rescue,” Iwaya said at a news conference. “Japan will respond appropriately once the details of the incident are uncovered.”

US Ambassador William Hagerty thanked Japan’s military for their search-and-rescue efforts and confirmed the incident occurred during a refuelling exercise.

“My heart goes out to the families and colleagues of Marines involved in this tragedy,” Hagerty said at an event at Waseda University in Tokyo.

The crash is the latest in recent series of accidents involving the US military deployed to and near Japan.

Last month, a US Navy F/A-18 Hornet from the aircraft carrier USS Ronald Reagan crashed into the sea southwest of Japan’s southern prefecture of Okinawa, though its two pilots were rescued safely.

In mid-October, a MH-60 Seahawk also belonging to the Ronald Reagan crashed off the Philippine Sea shortly after takeoff, causing non-fatal injuries to a dozen sailors.

US military accidents are a sensitive topic in Japan, particularly for residents of Okinawa, which is home to the bulk of the US presence in the country. A series of emergency landings and parts falling from US military aircraft have highlighted safety concerns.

More than 50,000 US troops are based in Japan under the bilateral security pact.

The incident adds to a growing list of US military aviation accidents around the world in recent years, prompting hearings in Congress to address the rise.

The Military Times reported earlier this year that aviation accidents jumped nearly 40 percent from fiscal years 2013 to 2017. At least 133 service members were killed in those incidents, it said.

Congressional leaders have called the rash of accidents a “crisis” and blamed it on continuous combat operations, deferred modernisation, lack of training and ageing equipment.