A lorry crash on the M6 has caused rush-hour chaos through the West Midlands with up to five-mile tailbacks.

An accident between a HGV and a van left the southbound carriageway of the M6 near Coventry blocked this afternoon.

The smash was reported at around 4pm and saw debris from both vehicles strewn across the carriageway.

The driver of the van suffered a minor head injury, officials said. No serious injuries were reported. 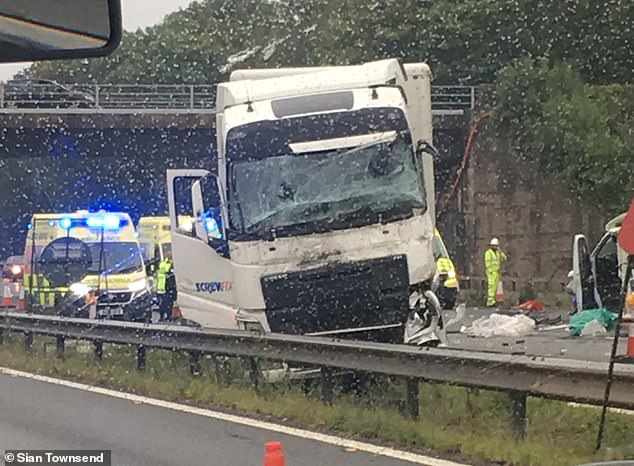 A lorry was damaged after colliding with a van on the M6 near Corley Services. Police and paramedics were at the scene and all three lanes were blocked 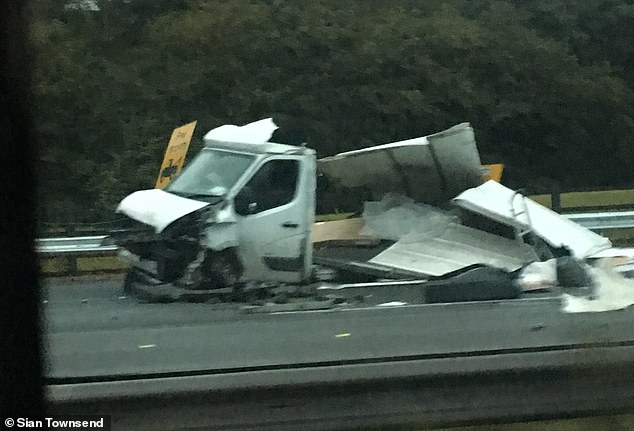 At one point motorists were stuck in delays of around an hour-and-a-half on the approach to the M6 toll near Corley Services, authorities said.

Paramedics and police were at the scene and firefighters reportedly got stuck in traffic trying to reach the site of the collision.

Motorists were warned of over four-and-a-half miles of traffic jams causing delays on the southbound side of the busy motorway.

Highways England said that one lane was clear by around 5.45pm but two lanes were still blocked, causing delays of around an hour.

A spokesman for the agency said: ‘There was an RTC between a HGV and a van. It was reported at around 4pm and effectively blocked three lanes southbound between junction 4 and the M6 toll at junction 3a.

‘Lanes one and two are still blocked but lane three has traffic running passed. There were 90-minute delays at one point but that’s down to an hour.

‘We are looking at getting recovery as soon as possible, so the situation is improving now. There were no serious injuries.’

No one from Warwickshire Police was not available to give further details of the incident.