The trial is expected to begin in Florida this week for one of the two suspects accused of shooting and killing their roommates, two 21-year-old twin brothers, before they attempted to clean up the crime scene with bleach and set the bodies on fire alongside a highway.

Firefighters were working to extinguish a brush fire in a rural stretch of Palm Beach County on March 15, 2017 when crews discovered two burning bodies roughly 20 feet from Beeline Highway wrapped in bedding and plastic. But the flames did not destroy all DNA evidence, and the victims were identified as twin brothers Brandon and Brian Allen.

Their roommates, Julian Cathirell and Darin Byrd, were arrested and charged with first-degree murder about two weeks later in connection to the fatal shooting of both Allen brothers inside the apartment the four shared in the 800 block of Millbrae Court, in West Palm Beach. The two will be tried separately, as now 26-year-old Cathirell’s trial will begin this week, the South Florida Sun Sentinel reported.

The trial is expected to rely heavily on DNA, as the murder weapon was never recovered, though investigators say a picture of a gun taken a day before the Allens were killed was found on Cathirell’s phone. Testimony is also expected from a key witness who alleged he was there the night of the murders.

Investigators say that after Brandon Allen and Cathirell had been feuding for months, a household meeting was called the night of March 14, 2017. During a heated argument, Cathirell used a .45-caliber handgun to shoot Brian Allen in the stomach and then Brandon in the right arm, according to a witness listed on arrest affidavits. Brandon darted for the front door, but “Darin Byrd blocked him and prevented his escape and pushed him down to the ground,” an arrest affidavit says. The witness went outside and heard two more gunshots, followed by Cathirell and Byrd coming out of the home to announce that the twin brothers were dead. 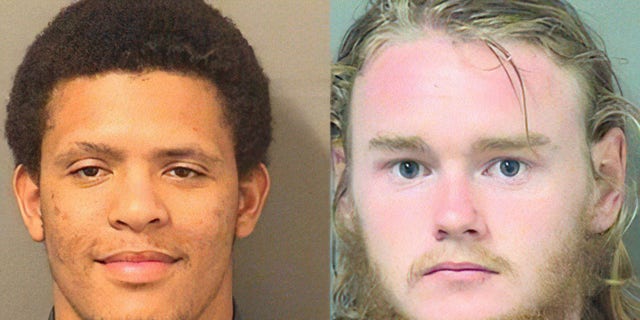 Jullian Cathirell, left, and Darin Byrd are each charged with two counts of first-degree murder in the March 14, 2017, deaths of twins Brandon and Brian Allen, 21.
(Palm Beach County Sheriff’s Office)

“Based on the aggression, threats, and hostility by the Allen brothers toward Mr. Cathirell in the weeks leading up [to] them being shot — as well as their very vocal efforts to obtain a firearm to harm Mr. Cathirell during that time period — it appears that a prominent issue for the jury to resolve in the trial may be whether or not Mr. Cathirell was justified in using deadly force to defend against a perceived threat to his life,” Pribble told the Sun Sentinel, arguing the Allen twins shouldn’t be called “victims” throughout the course of the trial.

Assistant State Attorney Lauren Godden previously filed a notice that the state would not pursue the death penalty for Cathirell if convicted, WPTV reported.

Investigators say Cathirell and Byrd used bleach and alcohol to clean up blood at the apartment, and a photo taken that night was found on Cathirell’s phone appearing to show a pool of blood on the floor. Investigators still managed to recover small blood samples from the floor that matched the twins’ DNA.

Arrest affidavits say Cathirell and Byrd briefly stored the bodies in a bathtub and planned to take Byrd’s girlfriend’s Toyota Corolla “on a drive” to the highway to find a spot to dump and burn the remains. Surveillance video obtained by investigators also shows Byrd driving the vehicle onto the property and leaving about 20 minutes later. Blood matching Brandon Allen’s DNA was found both in the trunk and on sneakers that Byrd admitted he owned, the sheriff’s office said.

No trial date has been set for Byrd.