Rome: Pope Francis has given the clearest sign yet that he will resign if his health deteriorates.

Speculation has been mounting about the future of his papacy, compounded by recent health issues and his surprise decision to call the meeting of cardinals in late August, a time when the Vatican is usually on holiday.

Francis also previously announced a visit to L’Aquila, an Italian town linked to Celestine V, a pope who resigned in the late 13th century, leading to speculation that he was planning to follow in his footsteps. 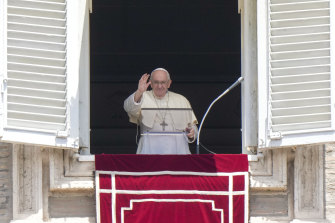 Pope Francis recites the Angelus noon prayer from the window of his studio overlooking St Peter’s Square, at the Vatican, on Sunday.Credit:AP

In an interview on Monday, he denied he was on the brink of retiring, saying the prospect had not crossed his mind in recent months.

The pope added that he would step down if he became physically unable to continue in the role. “When I see that I can’t do it, OK… I will do it in the great example of Pope Benedict,” he said.

Benedict XVI, who is 95, quit in 2013. It was the first papal resignation in nearly 600 years, announced during a meeting with cardinals – the same kind of assembly Francis scheduled for next month.

The pontiff’s comments go further than remarks he made in June, when he said: “I believe that a Bishop of Rome, a pope, who feels that his strength is failing – because these days we are living longer – has to ask the same questions that Pope Benedict asked.”

The Argentinian-born Francis has recently used a wheelchair or a walking stick in public owing to a torn ligament in his right knee.

The ailment forced him to cancel a trip to Congo and South Sudan scheduled for this week.

He said, “I’m still alive” when asked about his knee, and added: “I am well, I am slowly getting better”.

Francis also dismissed rumours that an operation a year ago, in which part of his colon was removed, was a result of cancer.

“It [the operation] was a great success,” the 85-year-old said, adding with a laugh that “they didn’t tell me anything” about the supposed cancer, which he dismissed as “court gossip”.

During the interview, Francis said he would like to go to Moscow and Kyiv, possibly in September, to “try to help in some way” with peace. “And now it is possible, after I come back from Canada, it is possible that I manage to go to Ukraine,” he said.

“The first thing is to go to Russia to try to help in some way, but I would like to go to both capitals.”

Francis has been accused of not going far enough in his criticism of Russian President Vladimir Putin, though he has condemned the war in Ukraine.

Last week he implicitly accused Moscow of waging a “cruel and senseless war of aggression”.

Responding to his comments, a Ukrainian Foreign Ministry spokesman said: “It is time to deepen connections with those who sincerely desire it.

“We renew the invitation to Pope Francis to visit our country and urge you to continue praying for the Ukrainian people.”

Elsewhere in the interview, he was asked about the US Supreme Court overturning the landmark Roe v Wade ruling that guaranteed a woman’s right to have an abortion. The pontiff said he respected the decision but did not have enough information to speak about it from a juridical point of view.

But he strongly condemned abortion, comparing it to “hiring a hit man”.

He said: “I ask: Is it legitimate, is it right, to eliminate a human life to resolve a problem?”