Foreign holidays could trigger ANOTHER UK-wide lockdown, experts warn – despite Boris’s promise crippling restrictions will end ‘once and for all’ as Britain marks one year since life as we knew it ground to a halt

Foreign holidays could trigger another lockdown because they risk bringing back vaccine-dodging coronavirus variants, experts warn.

Boris Johnson has promised his ‘roadmap’ will end the crippling restrictions ‘once and for all’, as Britain marks a year since life as we knew it ground to a halt.

But SAGE scientists say trips abroad this summer could ‘jeopardise’ the UK’s hard-won low infection rates amid a spiralling third wave in Europe.

Professor Kamlesh Khunti, a SAGE member, urged Britons not to book holidays abroad ‘until next year’.

‘We had people coming in from Spain and Italy (last summer) and that increased the rates in the UK,’ he told the Guardian. ‘We cannot allow that now. Does this risk another lockdown? Absolutely.’

And Professor Calum Semple, who also sits on SAGE, cautioned France, Germany, Belgium and other countries seeing a spike in cases amid low jabbing rates were the ‘perfect breeding ground’ for dangerous variants.

‘So, at this point, Britain has got its act together, the concern is as this third wave is going on elsewhere, that will generate new variations,’ he told Sky News.

‘Even within Britain there is a likelihood of a third wave in potentially July and August time when we do unlock society.’

The Prime Minister has warned Europe’s surging cases will ‘wash up on our shores’, as he prepares to offer millions of first doses to the continent which has struggled with its bungling jabs roll-out.

Mr Johnson has put high vaccine uptake at the heart of his lockdown exit strategy, but warned the spread of troublesome new variants could derail the plans. The earliest date all restrictions could go is June 21.

It comes amid mooted £5,000 fines for anyone leaving the UK without a ‘reasonable excuse’ and that restrictions could last all year for some holiday hot-spots. 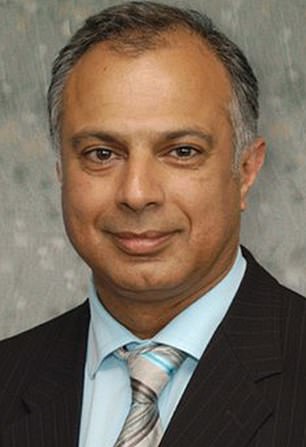 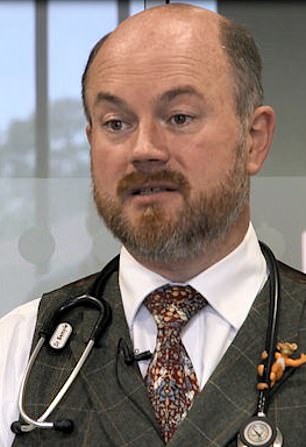 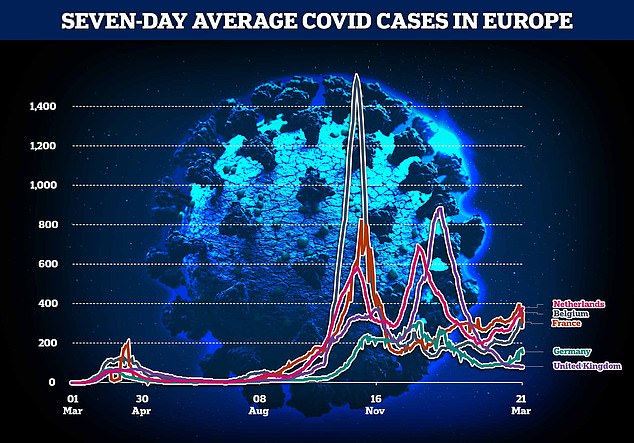 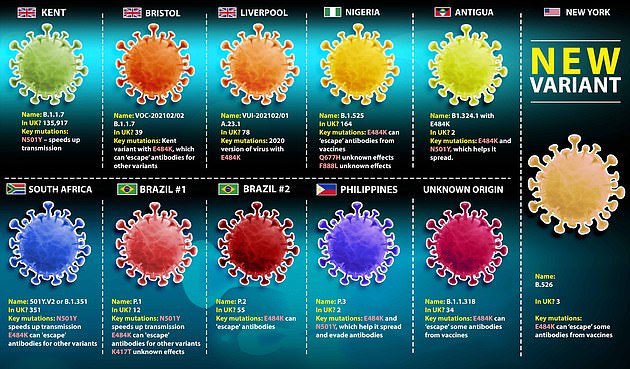 Three cases of the New York variant have been identified in the UK, which may have been here for at least a month. They carry the E484K mutation, which can make vaccines less effective

FOREIGN HOLIDAYS WILL BE ILLEGAL FROM MONDAY

Travellers face a £5,000 fine for going abroad on holiday when a ban on leaving the UK without ‘reasonable excuse’ comes into force on Monday.

The threat of fines has been extended until the end of June, making foreign summer holidays look increasingly unlikely as a third wave of coronavirus sweeps across Europe.

And France is likely to be added to a ‘red list’ of countries requiring hotel quarantine by the end of the week.

Health officials are increasingly concerned by a surge in cases of the South African Covid variant across the Channel.

A senior minister even suggested the whole of the Continent could be put on the red list because of the botched vaccine rollout.

Quarantine-free holidays may not be possible until August, killing off hopes of trips abroad until late summer.

Transport Secretary Grant Shapps is leading a taskforce that will report by April 12 on how and when the ban on non-essential travel can be lifted. It can be no sooner than May 17 under Mr Johnson’s official roadmap.

That might mean the need to quarantine after foreign trips would stay in place until at least August.

Britain has sparked surge-testing to stamp out cases of the South African and Brazilian variants, which studies suggest could make jab-induced immunity less effective.

Public Health England figures showed there have been 351 and 55 cases respectively, which scientists say suggests both variants are yet to gain a foothold in the country.

But on the continent cases of the South African strain are rising rapidly, with it already making up 10 to 15 per cent of all new infections in France alone.

This raises the spectre they could become seeded in the country and spread rapidly should Europe fail to get a handle on cases ahead of the summer, which scientists say could spark another lockdown.

They add rising infections in the face of low vaccination rates also risk the emergence of new dangerous variants, as it gives the virus time to learn tricks to avoid vaccine-triggered immunity.

‘It’s been a hard lockdown, we are doing so well, we cannot jeopardise this now,’ he said.

‘Our rates are coming down, our vaccination rate is fantastic, and the biggest fear we have is new variants that the vaccines don’t work as well against.’

Professor Semple, an epidemiologist at the University of Liverpool, warned Britain’s third wave – which experts say may hit as early as July – will likely initially be focused in those who are ‘less susceptible to very severe disease’.

‘It’s inevitable as we unlock there will be an rise in cases,’ he said.

‘(But) the key here is have we won the race to vaccinate the most vulnerable members of society so we can keep society open this time.’

Top expert Professor Neil Ferguson, however, whose scary predictions of thousands of deaths spooked ministers into the first lockdown said modelling suggested this lockdown could really be Britain’s last.

‘The team at Imperial and I have spent the last few months modelling vaccination and new variants,’ he wrote in The Telegraph.

‘The next few months require continued vigilance, but I am hopeful this third lockdown will really be the last.’

Experts warn Britain may face a third wave of the disease this summer, as more restrictions are relaxed and cases are expected to rise.

Although thought to be worse over the winter, the virus can also spread rapidly during the summer months. South Africa, for example, endured its second wave at its hottest time of year.

The Prime Minister has warned he will slam the brakes onto his roadmap should cases rise in a way that could spark more hospitalisations and deaths from Covid.

Mr Johnson has also not ruled out imposing tighter curbs on local areas to contain the spread of the disease.

It comes as Health Secretary Matt Hancock today said the UK must be ‘permanently ready’ for all future pandemics.