As voters braved the conflicted streets of the United States to cast their judgment on their nation’s presidency, we recalled that precisely four years ago, Australia’s then prime minister, Malcolm Turnbull, turned up late and ashen-faced to speak at a dinner at the National Gallery of Australia.

“What an interesting night,” he quipped awkwardly to the 360 business leaders seated within the gallery’s reception hall, many of whom were as knocked sideways as Turnbull about the astounding events of the day. 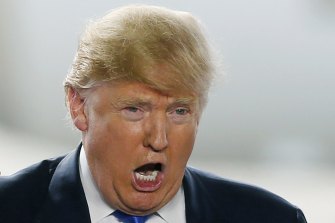 “I’m sure everybody is focused on the agenda tonight and not paying much attention to what’s been happening in the United States.”

What had been happening during the day, of course, had shaken the world, and would turn it ever-dizzier over the next four years.

Turnbull, like almost everyone else, was not prepared for Donald Trump to defeat Hillary Clinton and succeed Barack Obama as president of the United States of America.

“Don’t worry, Malcolm. The American people will never elect a lunatic to sit in this office,” Turnbull, in his book A Bigger Picture, would report Obama as saying.

At least Turnbull had seen Obama’s prediction turn to mush in a single afternoon and had something to talk about by the evening, even if it had to be hastily ad-libbed. 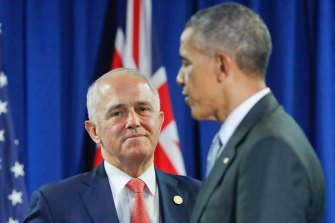 The latest Australian Prime Minister, Scott Morrison, had nothing at all that he could judge safe to say on Wednesday.

Joe Biden seemed close to a breakthrough, but there was no result as the Australian evening came down and Trump was raging on Twitter.

Only two things were perfectly clear as half the world sat around TV sets and smart phones, watching the numbers fall for either Trump or Joe Biden.

Polls could no longer be trusted. And there were now several distinct Americas.

This was no longer a country simply split by Hillary Clinton damning those who supported Trump as “deplorables”.

This was a country hopelessly divided between suburban residents and rural people; those with university educations and those without; the rich and the poor; conservative evangelicals and liberal unbelievers; Black Lives Matter activists and fearful householders and business owners, plus racists, among others.

These were old divides, but many of the groupings had become almost unrecognisable to each other in the four years since Trump became President.

And while Hillary Clinton was perceived in 2016 as too strident, Biden appears to have been viewed by many in 2020 America as too laidback, leading some who might otherwise have flipped to him to judge him as weak.

Trump has never been in Australia as President, but it was possible to deduce something of Biden when he visited three months before the 2016 election bombshell.

Three former prime ministers – Bob Hawke, John Howard and Tony Abbott – turned up to hear Biden speak in Sydney, giving him the opportunity to point out their periods as leaders had all overlapped his 44 years of service in government.

Biden spoke of the “character” of Australia – grit, integrity and unyielding resilience – which he said drew Australians and Americans together “because we recognise it, I believe, in each other”.

But Australians don’t vote in US presidential elections.

The quality of integrity in Trump – and that of Biden himself, lambasted by hardline conservatives as a front for “socialism” and even “communism”- had to face scrutiny by millions of American voters within a global free-for-all.

What a difference four years had delivered to the world.

A plague is bringing nations – particularly the United States – to their knees.

Even the wearing of masks has been politicised. Biden remained low-key behind his mask, while Trump boasted of “feeling like Superman” when he took drugs to survive COVID-19.

Across the Atlantic, the United Kingdom is quitting Europe, led now by the latest Prime Minister, Boris Johnson, himself a Trump-approved COVID-19 survivor.

And, of course, Turnbull is no longer the PM.

Morrison unseated him and, in an election almost as mortifying to pollsters as Trump’s win four years ago and Britain’s Brexit vote, defeated Labor’s Bill Shorten to remain prime minister last year.

The conservative, pragmatic Morrison would likely have no complaint if Trump held on now.

The first was for the President of France, Emmanuel Macron (before the relationship soured).

The second and last was for Morrison. The two got on well, it was widely reported.

But with the result unclear, Morrison wasn’t about to be blindsided as Turnbull was those years ago.

He remained mute, waiting – like the rest of us – for some form of clarity from this confusing event.