Premier Daniel Andrews has confirmed the state government is considering making flu shots free for all Victorians in a bid to curb a sharp rise in infections.

The NSW and Queensland governments have already pledged free influenza vaccines for those aged six months and over. 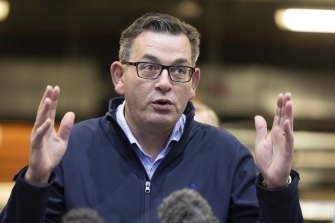 In the clearest indication yet that Victoria will follow the lead of the northern states, Andrews confirmed the government was in “deep discussions” with the pharmacy guild and Australian Medical Association about making flu shots free.

New data shows fewer than two in 10 Victorian children under five have received a flu vaccination this year, despite being among those already eligible for a free jab because they are considered especially at risk of severe disease.

Victoria has recorded more than 10,000 flu infections so far this year.

“We are working with the pharmacy guild and the AMA,” Andrews told reporters on Wednesday.

“It is very important that we talk to them as they are the ones who are going to predominantly be undertaking that work. They’re the ones who distribute and provide those jabs so we are in deep discussions with them.”

Andrews said he would have more to say on that matter soon and that they were seeking Commonwealth support for the initiative.

“Can it be done? If so, how can it be done?” Andrews said. “It’s really important that we don’t just make announcements. We need to have a detailed plan before we go down that path.”

Earlier this week, Victorian doctors and pharmacists joined the push for free flu vaccinations for every Australian to help curb the surge of cases in already overcrowded hospitals and shake the vaccine fatigue that may be contributing to a huge rise in influenza infections.

Royal Australian College of General Practitioners president Dr Karen Price warned the flu could be “quite nasty” in young children. She said people had been preoccupied with COVID-19 vaccinations and might not have expected the flu to pose such a significant problem so quickly.

“We were concerned because we’ve got a largely flu-naive population after two years of isolation, so we need to get a wriggle on.”

Last week, The Age revealed increasing numbers of Victorians were falling ill with nasty bouts of influenza, leaving them bedridden for up to 10 days. Hospitalisations and intensive care admissions for the disease have also risen.

This week, the Queensland government announced all residents would be offered a free vaccine before the end of June, warning of a “severe outbreak” of influenza A, a more serious strain of the virus. NSW will begin offering free influenza vaccines to all residents as early as next week.

Australian Medical Association president Omar Khorshid said a free flu vaccination for all Australians was a good idea and should be considered by the Albanese government.

However, he said complacency might be more of a problem than cost, and politicians needed to ensure the community understood the country was facing a major health crisis in which people could not always access care when they needed it.

Pharmacy Guild of Australia Victorian president Anthony Tassone said he supported the push for free flu vaccines, but that it was up to the state government to “look at any measure to help encourage and increase flu vaccination uptake”.

On Tuesday night, the Royal Children’s Hospital said its emergency department was at capacity for the third time in less than a month as doctors and nurses dealt with a 500 per cent increase in flu cases.

With Aisha Dow and Timna Jacks