Leading health experts from across the nation have decried the Morrison government’s decision to keep a Tamil asylum-seeker family on Christmas Island, saying it will lead to lifelong trauma for the children.

Family friends say the mental health of the Murugappan’s two young daughters is deteriorating as the youngest is kept under guard at Perth Children’s Hospital after being diagnosed with pneumonia and sepsis. 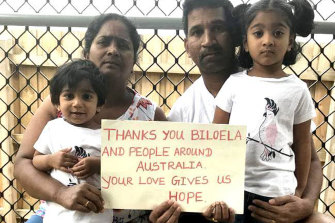 The Biloela Tamil family at the centre of the deportation row. Credit: Supplied

Priya and Nadesalingam Muruguppan and their Australian-born daughters, Kopika and Tharnicaa, have been detained on the island since August 2019 after authorities swooped in and removed them from the Queensland town of Biloela.

Both parents have lost their attempts in the courts to be given refugee status in Australia. Yet the federal court decided in February that Tharnicaa had been denied procedural fairness, which means the family’s legal fight continues.

Tharnicaa had to be flown from Christmas Island to Perth last week amid fears she had an infection. Priya had first alerted doctors of her daughter’s illness almost two weeks prior.

The night before Tharnicaa’s evacuation, Priya spent an hour on hold with the detention centre medical service’s office in Sydney trying to get permission to take her daughter to the island’s hospital. After Tharnicaa was seen by a doctor it took another five hours to get her to the clinic.

As medical experts, it’s clear that the mental and physical healthcare needs of asylum seekers and refugees are being neglected in Australia’s detention system.

Tharnicaa’s health is improving in hospital, where she celebrated her fourth birthday over the weekend, but family friends are warning she is increasingly distressed about being separated from her father and sister, who remained on Christmas Island.

“I’ve been on the other end of the phone with Priya trying to comfort Tharnicaa as she’s just sobbing asking for her father and her sister,” Angela Fredericks told WAtoday.

It was revealed on Sunday that Tharnicaa’s doctors had recommended the family be reunited urgently for the best “physical and psychological” outcome.

Both girls were placed in separate cars from their parents and were not allowed to sit with them on the plane when they were detained in 2018, leading to severe separation anxiety, Ms Fredericks said.

Tharnicaa, who was only eight months at the time, became sleepless and stopped eating. The lack of sun in detention led to vitamin deficiencies and infections to her teeth, which had to be removed.

Almost two years after being sent to Christmas Island, the whole family was still sleeping together on a queen-sized bed and Tharnicaa became anxious whenever she lost sight of her parents.

Both girls were able to go to school on the island, but were escorted by guards and could only receive visits from friends at a local recreation centre.

“They haven’t just been robbed of their childhood, they have been given a trauma load for the rest of their life and that can never be reversed,” Mr Fredericks, who is a social worker by trade, said.

“This has changed the pathways in their brain.” 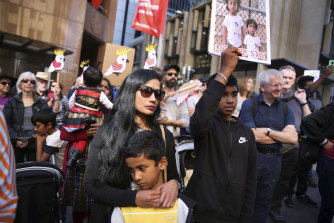 Supporters of the family during a rally at Martin Place, Sydney, in 2019.Credit:James Alcock

Mr Fredericks’ concerns have been echoed by Australia’s most high-profile doctors, psychologists and researchers – including the bosses of the Australian Medical Association, the Royal Australiasian College of Physicians and the Telethon Kids Institute – who want the family released.

“As medical experts, it’s clear that the mental and physical healthcare needs of asylum seekers and refugees are being neglected in Australia’s detention system,” she said.

“Australia must release all asylum seekers from detention facilities and provide them with the support they will need for this transition.”

Telethon Kids Insitute director Jonathan Carapetis went one step further, telling ABC Perth on Friday it was cruel and dangerous for both girls to be locked up.

“It is putting a child’s normal development at risk because they’re not able to socialise with other children, have a normal schooling experience, it puts their mental health at risk and it’s just unacceptable that we are still doing this in this country,” he said on air.

Research by American psychiatrist Bruce Perry has revealed trauma and prolonged stress can literally shrink the brain and alter its functioning, which can have long-standing implications.

Detention has also been linked to increased mental health and behavioural issues in refugee children, such as anxiety, sleep disturbance, bed-wetting, suicidal thoughts and self-harm.

And it can cause long-term damage to social and emotional functioning, Australian Psychological Society president Tamara Cavenett said.

“There is over a decade of evidence which shows detention has an alarming impact on the mental health of refugees, particularly children, and these consequences must not be ignored,” she said.

“Research has shown 34 per cent of children in detention centres had serious mental health disorders compared to 2 per cent in the Australian population.”

Ms Cavenett said it was deeply concerning Tharnicaa and Kopica were exposed to living conditions known to be damaging to their development when community detention and processing were viable options.

Biloela residents have repeatedly urged the government to allow the family to return home, where they are respected members of the rural town’s close-knit community.

“We’re now back to that point of how much longer can this go on? It’s so distressing watching your friends just time and time again going through these things,” Ms Fredericks said.

“If Priya and Nades were in community detention they would have gotten Tharnicaa to the hospital on day three of a fever, she would have started antibiotics and none of this would have happened … as a country, it’s just shameful and I know we are better than this.”