French inventor plans to cross the Channel by HOVERBOARD: ‘Flying soldier’ who delighted Bastille Day crowds with his 87mph contraption will attempt to fly from Calais to Dover

A French ‘flying soldier’ who wowed France by soaring over Bastille Day celebrations on a hoverboard now plans to cross the English Channel on the 87mph contraption.

Inventor Franky Zapata wants to fly around 37 miles from Calais to Dover on Thursday, refuelling halfway across the water.

The stunt will mark 110 years since French aviator Louis Blériot made the first flight across the Channel in 1909, scooping a £1,000 Daily Mail prize.

He hopes to make the crossing in around 20 minutes, similar to the time it takes for a high-speed train to travel through the Channel Tunnel, although he will have to refuel on the way. 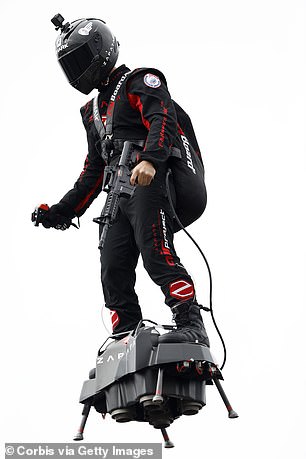 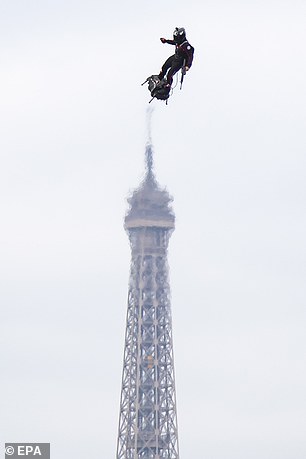 Hoverboard: A French ‘flying soldier’ who wowed France by soaring over Bastille Day celebrations on a hoverboard (pictured left, and right above the Eiffel Tower) now plans to cross the English Channel on the 87mph contraption

Speaking to Le Parisien, he said the Bastille Day flight had used only three per cent of the vehicle’s capacity.

The Channel stunt would need 99 per cent, he said, as he will be reaching speeds of up to 87mph.

The device can only remain airborne for 10 minutes, so Zapata will need to refuel along the way.

To do that, he could land on a boat to fill up his tanks – although it would not then count as a full Channel crossing.

Alternatively, he could hover a few feet above the boat while the crew hand him equipment to refuel, although that would be riskier.

According to French media, civil aviation bosses have approved his stunt but maritime authorities have been less keen.

Officials fear that the hoverboard could collide with passing ships, it is reported, but they have not banned the trip. 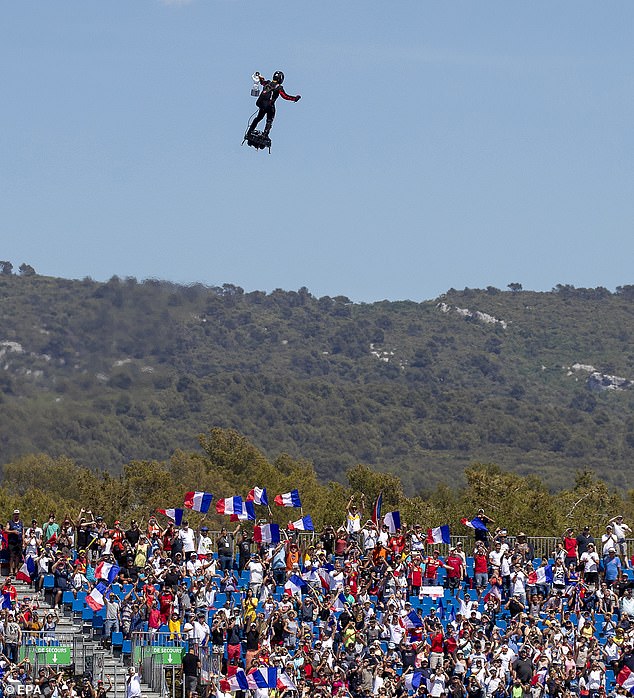 Performance: Franky Zapata of France arrives on a flyboard before the start of the 2019 French Formula One Grand Prix in Le Castellet in June this year

‘We’re ready, from six in the morning to dusk,’ insisted Zapata.

The military reservist rocketed through the air past Paris landmarks including the Eiffel Tower and was hailed by President Emmanuel Macron.

Before that, he entertained fans at Formula One’s French Grand Prix in Le Castellet in June this year.

The entrepreneur from Marseille developed the turbine engine powered board in his garage at home.

The jet turbine-powered Flyboard Air is an evolution of his earlier water-powered ‘jet pack’ design.

According to Zapata’s website, the device is ‘very easy to learn’ and ‘designed to be flown without pilot training’.

Zapata hopes it could be put to use in military and industrial settings and could provide emergency access for rescue workers.

He will allow tests for different kinds of uses, for example as a flying logistical platform or, indeed, as an assault platform.