The peaceful application of nuclear explosions offered special promise for practical use in Australia, the secretary of the Department of National Development (Dr H. G. Raggatt) said tonight. 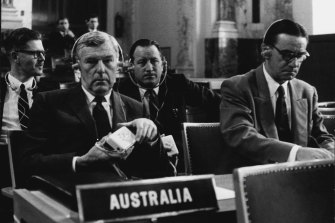 Dr. H. G. Raggatt (2nd left) and other members of the Australian delegation at the General Conference of the International Atomic Energy Agency (IAEA) in Vienna on September 25, 1959.Credit:IAEA

“The technique is almost ready to use,” he said, “we have the prospect of doing things that have been looked at in the past and rejected because of the cost.”

Dr Raggatt was speaking at a lecture by Rr. Garry Higgins, director of the Plowshare Division at the Lawrence Radiation Laboratory, California, which is operated by the U.S. Atomic Energy Commission.

The two most likely application in Australia, he said, involved “shifting dirt” – blasts that would dig enormous holes for water storage and for harbors in the north.

Dr Raggatt said that even now nuclear explosions for peaceful purposes were “pretty clean” in the radioactive sense and they were getting cleaner.

Scientists had to convince the public of the truth that the risk from fallout was nothing to worry about.

Australia’s development would depend on its water resources, not on oil discoveries or anything else.

Adelaide, and South Australia generally, Dr Raggatt said, faced the prospect in eight to 12 years it could not be assured of an increment of water supply and must decide whether it wanted industrial growth continued.

If industrial growth were to continue, agricultural land would have to be taken out of production.

The very big, cheap craters that a nuclear explosion could create on the uninhabited plains would provide a means of storing the great volume of excess water that came down the Murray every few years.

Such craters would be essential because engineers were certain there was no other way of storing these flood waters.

Dr Raggatt said the application of nuclear explosions to mining would have to be in the distant future because usually people were living near mines.

“This new field of technology opens new horizons for Australia in water conservation and in harbors,” he said.

“In the north, where there are resources, but not one harbor, nuclear explosions offer a prospect of doing things.”

Dr Raggatt said one thing of particular appeal about nuclear explosions was that the cost did not increase much as the size increased.